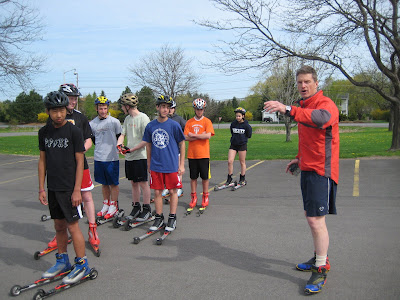 A couple weeks back, when I was in VT, Jonathan Bigelow and I started talking about the sad state of NYS skiing. Being from Vermont (and married to a Norwegian), but currently living in Rochester with his kids enrolled at Pittsford schools, he has a pretty good idea of what a good ski program should look like, and we both agreed that there was a lot of wasted talent in some of the NY public schools. Not that the coaches don't do a good job coaching - they do a great job - its just that when you have two coaches and 100+ skiers, each skier doesn't get quite as much attention as he or she might want.

So we decided that we would hold a ski clinic, for the motivated skiers at any of the local highschools. Although the Rochester xc ski foundation should probably have been involved, we figured it would be easier to get this off the ground if we just did our own thing. I borrowed a load of CSU's rental rollerskis, roped Jess into the deal, and headed to Rochester. We had nine kids show up for an almost-all-day clinic, mostly boys but two girls, which I found impressive since the level of dedication in most highschool girls is somewhat disappointing when it comes to summer training. I actually ended up loaning out my rollerskis as well as the CSU ones, which meant that basically, I stood around blabbering while Jess demonstrated and Jonathan video-taped - I think it worked out. The kids were pretty receptive to the drills we were doing, and most of the boys sound like they're going to be doing a fair bit of training this summer, which was heartening. 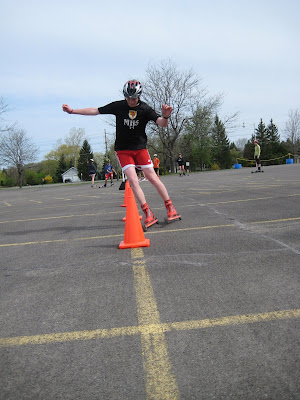 This was a good little clinic, we spent most of the day doing laps around the parking lot, which had a short uphill so we could work on uphill stuff too. They really enjoyed anything that we made competitive, which makes sense given that we're talking about highschool boys, here. We had them doing some hot feet drills (counting to see who can get the highest number of steps between the cones), an agility course, double pole sprints, single stick sprints... they were probably feeling pretty worked by the time we finished practicing hill bounding!

Unfortunately, if they don't practice these drills it doesn't really matter that I drove all the way to Rochester. What they need is coaching like this every week, not once a summer, but hopefully they'll at least be motivated to ski train over the summer... 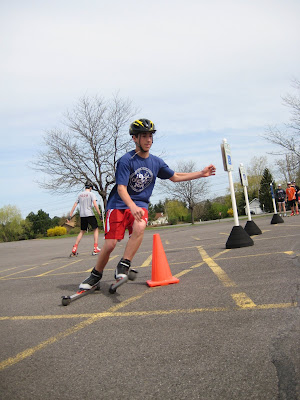 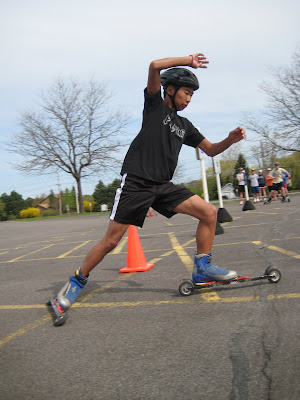 Some days, it just hits you in the face how rewarding a job coaching actually is.
Posted by Alex at 10:13 AM