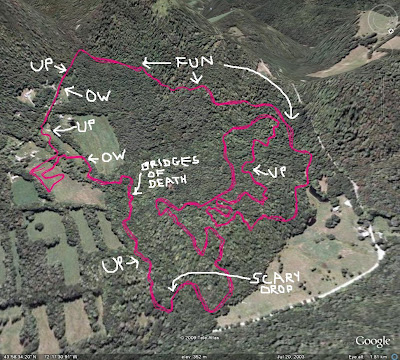 I love this race. This is the only race that's made me cry. Last year I had a lot of fun, because I didn't crash off any bridges, but I was worried I might cry again this year since I had agreed to ride expert so that my ride could sleep in, and because there was torrential rain for two hours before the expert race. Other than Great Glen last year, where I ran 1/3 of each lap, I don't know if I've ever raced in mud. I don't really belong in the expert race, but it worked out in the end, and I beat some people. I really sucked on the uphills, maybe I could have gone faster had I tried harder, but I had no desire to test that hypothesis. I figured I'd have less fun if I couldn't ride the fun parts because I was too tired, and I'm in this for the fun. Usually. At least until the competitive part of me catches up.

The course starts with an uphill in an open field leading to an uphill dirt road, so you get to see right off the bat how much you're going to suck. I could tell it wouldn't be pretty, but I had neither the ability nor the desire to put myself in the hurt box to keep up. Going downhill was fun, things were slippery and slimy and rooty and rocky, and I'd caught Cathy by the bottom of the singletrack, which made me feel really good about myself. We traded leads for a bit, she'd pass on the uphills and I'd pass on the downhills, do something boneheaded and fall off my bike, catch back up, repeat. Then she let slip that she'd sprained her ankle this morning and only had to finish to take the series lead, and I felt a little less smug.

We came through the first lap more or less together, Linnea gave me another water bottle, thereby becoming my hero, and then we started that stupid climb again. Entering the singletrack the pros were starting to catch up, I felt pretty bad holding them up so I'd generally just pull off the trail. Those guys are fast. Then the experts started to pass me. It was kind of nice to have an excuse to walk my bike... there were some uphill bits that were just too slick for me, and I wasn't feeling energetic enough to run with the bike. At one of the water crossings, I did a slow-motion endo, and caught myself on my forearms on a flat rock. At least the rock was flat, I guess, but my arms were stinging pretty bad, and later on I managed to slide out on some roots and land on my left forearm - made me yelp. I was still having fun on my bike, but I was starting to get tired. I did ride (on the second lap) the drop where Colin and Linnea had heckled me last year, and I championed over the sketchy bridges again.

By the third lap, it was getting lonely. The experts were done passing me since they had been finishing their third lap, and the pros had all already lapped me going into their fourth lap. Cathy was behind me somewhere, but I wasn't feeling too inclined to slow down and wait just to have company... that wouldn't be the proper competitive spirit. Then Rob Stine, a pro, caught up, I think he'd been walking since he'd lost a cleat, which was faster than my riding, and rather than blast by me like most people he chatted away behind me, which was super nice of him, as it took my mind off my ragged breathing and tired legs. My upper body was getting pretty tired by the end, too, and I was starting to notice just how slippery those wet roots were, but my third lap was about a minute faster than my second one, probably thanks to being less willing to just walk the uphills with someone there to see it and since I wasn't pulling over to let people pass.

So, I survived my first expert race. Lots of uphills in VT, but I still love that course. I went up to Kingdom Trails with Colin and Linnea after the race, because clearly getting trounced in a race isn't good enough, I need to go chase after should-be-pros for a day to top it off. They were getting entirely too much pleasure seeing how out of breath I was every time I pulled up. We passed a couple at one point, first Colin and Linnea go by, then I go by at a much more pedestrian pace, and the guy says, "I don't envy you keeping up with those two". Nope, me neither... 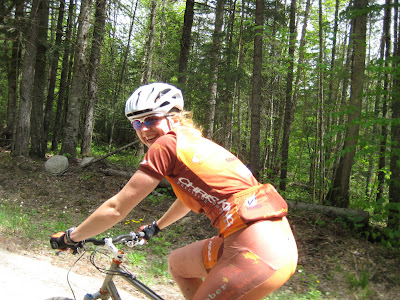 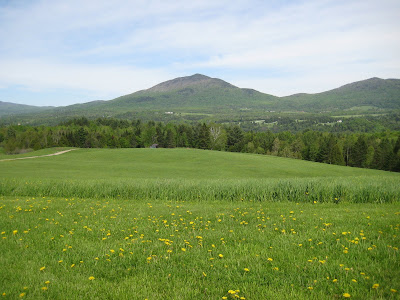 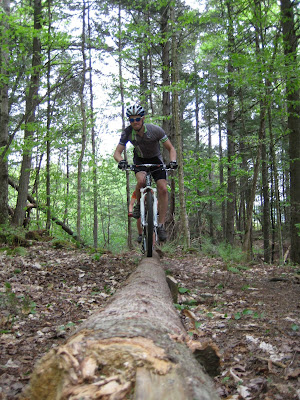 The kids found a playground. I did it too, but less gracefully. 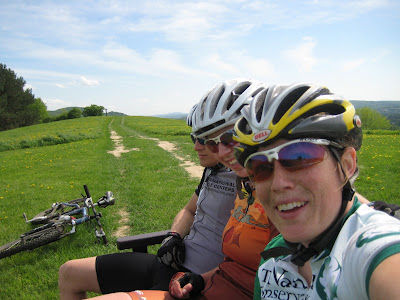 With a day like this, what's not to love about riding bikes? 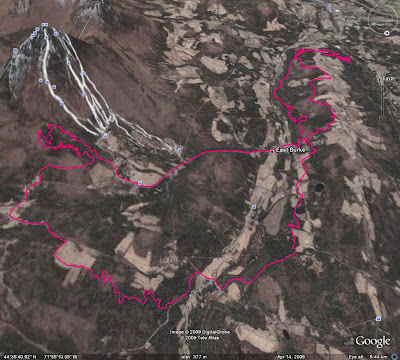 The really fun part were the zig zags coming back down the mountain.
Posted by Alex at 8:56 PM

You SO belong in the expert race...

siiiiiiiiiick. wish i was there for that roadie course...

Nice, Alex! What's up next?

Last year, I did coyote hill the day of VT 50 sign up, was reminded how much the combination of me and hills suck (though I concede the course is still awesome), and refused to sign up for VT 50. This year, I didn’t do coyote, didn’t get my anti-hill reminder, and signed up for the 50. Foolish? (We probably both know the answer to that …)

I might do Putney, but my dad is in town to run the Lafayette-Lincoln ridge that weekend, so I guess we'll see how we feel after a 4+ hour run in the Whites... =)

For the record, I was willing to leave early for the Cat2 race. I have a feeling it was the middleman (cough*colin*cough) who wanted the extra beauty rest.