Ian and Lori were the course setters for Sunday's meet, and it went really smoothly, with the exception of #5 and #6 on the advanced courses being switched. That would be my fault, I apparently can't tell the difference between a 5 and a 6, and didn't notice that I'd put them backwards (they were ~1km apart, so this was definitely not just messing up - it was deliberate, if unintentional) when I set them, nor when I hit #5 (which was labeled as #6), it was only when I got to 6 and noticed that it was labeled as #5 that I was like, ohhhhh ****. Luckily, not too many people had been through there already and they weren't messed up by it. Too much. What could have been disastrous was that I'd switched a yellow course control with a white course control - those being the easiest two courses - that were right near each other (~15 feet). Luckily, I decided to run the yellow course first, and noticed the switch, so was able to change it before any yellow or white runners came through. *phew*!

I guess that's one way to ensure that you won't be asked to hang controls again... at least I can find the right spot, just don't ask me to do numbers.

After running the yellow course at race pace, I figured it was time to do a real course. Given that my knee has been hurting after long runs, I decided to do the green course - about half the length of the blue course, but sharing many controls. I didn't manage to get 10min/kms (thats for the straight-line distance, so not quite as disgustingly slow as it sounds), which was sad, but the woods here are fairly thick, as evidenced by all the green on the map, and I didn't feel like pushing hard. Even on trails I doubt I was ever moving much faster than a 10-min/mile. 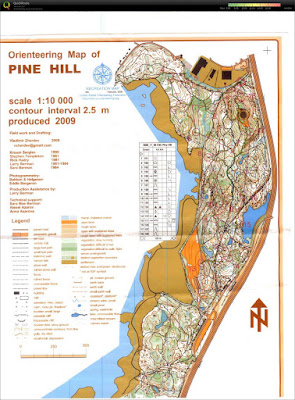 The color-coded stripe is my route. As you can see it was pretty clean, but there were some definite bobbles in the control circles. My overall goal for the day was to run cleanly, but more specifically, my mantra was "compass, look around, plan an exit strategy". I was pretty successful with that, never deviating too badly from my desired path (although I thought I was going much straighter from 3-4 than the route shows), unless it was to run on trails. The Fells is so full of trails, it would be easy if it weren't confusing. Its actually much more pleasant to run in the woods, all the rocks on the trails hurt my feet and threaten my ankles, while the woods are nice and leafy and pretty even.

In the end, I won! (scroll down to the green course). And, I beat Ed, which is far more important than winning... apparently, someone informed him that I was running green, so he specifically ran that course to try and beat me, but made enough 2-minute errors that I came out ahead. The even better news is that the run was short enough that my knee didn't bother me, so running shorter may have been the smartest thing I did all week! Since we all know there was no way I WOULDN'T run.

It was a slow and steady sort of day, but slow and steady was good enough. Maybe I'll figure out fast and consistent next... seems like I'll have an even better success rate with that strategy - I'll try it at the Blue Hills Traverse next weekend. If you're a runner with a sense of adventure, this is a good one to check out - following is permitted (encouraged?), so you technically don't need map-reading skills, although they help. Plus, its local. There are some recreational courses too, for the less-adventurous of my readers...

I headed over to Concord for a rollerski practice after finishing the orienteering, and ran my boys through their paces... V1 seems to be eluding them, although they look darn good in V2. We'll get there, gotta work on the V1 while we are still rollerskiing and not yet on the flat gerbil-loop of Weston. Sunday (hell, Saturday too!) was a beautiful day to be outside, and I hope I saw enough of the sun to get me through another zombie week - morning workout in the dark, evening workouts in the dark, its a good thing they make vitamin D supplements and bike lights.

Is this Ed's rollerski business? The CC team is thinking about buying a bunch.

Sweet name! I didn't know Ed was so far along with this! Is he going to sell some at WY?

Niflheim Nordic is Ed's company - I know he was talking to the captain of the CC team about doing a group deal, we'll see if that happens. Newton North just ordered a bunch for their ski team.