We aren't really doing things traditionally... having leftovers for dinner instead of turkey, for example. But, the turkey isn't what thanksgiving is about. As far as I can tell anyway, its about the pies. No, not even pies - its about appreciating what you've got. There is a lot to be thankful for, as corny as that sounds, and its even cornier to list stuff in a blog, but still, sometimes you do have to just sit and count your blessings.

I'm sitting in a warm hotel room, with an upside down pineapple cake in the oven of our adjacent kitchenette, spending time with Jess, four blocks from 40km of perfectly groomed ski trails, in NOVEMBER! I have six pair of fast skis just waiting for the right conditions, brand new boots that fit like a charm, and snazzy-looking poles, all thanks to Alpina. Looking broader, I have a job, that I feel is meaningful and that allows me time off to go on these crazy adventures, I have coworkers who support me, and I have the time and energy to devote to ski coaching, with talented coaches and some great juniors. I have a boyfriend who most of the time believes in what I'm doing with my spare time, unless of course its those 5am rollerskis in the rain (when even I'm questioning what it is I'm doing), parents who love me, and great friends. Before I get too gushy, let me just say thanks. Life is good, and I'm happy. 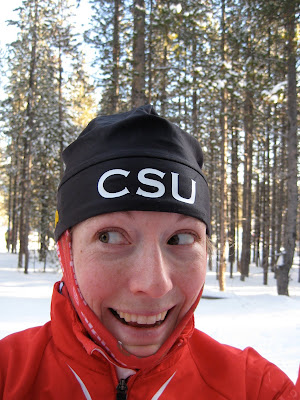 Now back to the important stuff - skiing! The first race was yesterday, a qualifier-only sprint race. It was on a trail called volunteer, which had some really fun ups and downs (well, the downhills are generally more fun than the uphills in my book) - and it was point to point. An interesting format. The general consensus at altitude is to start slow in the races, and I did that part REALLY WELL. Of course, then the consensus says you have to speed up, and I didn't do that so well. If we look at the bright side, no post-race hack! 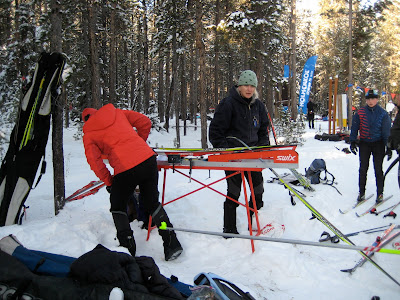 The pre-race waxing bustle. I had great skis, Janice of NENSA was waxing for me, thanks Janice!

A little back story... we got here late saturday night, and I felt fine skiing Sunday, but after a harder workout Monday morning, I felt like utter crap all afternoon. My stomach was all twisted in knots and I really couldn't move. No appetite, and forcing down some lunch had put my stomach into that uncomfortable spot. Tuesday rolled around and I still didn't have any appetite - I made it through a bowl of oatmeal in the morning and about half a bottle of gatorade later on, but I was bonking by the end of the morning's ski - light headed, dreaming of lying down, short of breath, freezing cold, the full-on bonk. I was a little scared, my stomach still hurt if I tried to take any food (which explains the bonk), so called my dad to see what he thought, naturally he said don't rule out swine flu, which had Jess super pumped, let me tell ya... I was able to choke down a couple bites of banana before the afternoon ski, and made it through about an hour before I started to get really cold. Jess dragged me along, being super nice and waiting as I'd hang over my poles at the tops of hills and poking me to make sure I wasn't dead from time to time, and aside from the slightly painful pins and needles and the constant shivering, I survived. But boy was I feeling crappy. Still no food, because that would make my stomach hurt. I was thinking I probably shouldn't race if I was feeling like this, because I was discovering that not-eating leads to being very cold and feeling very tired. Never could have guessed that one...

Luckily, Wednesday morning rolled around and I was - if not quite hungry - at least not feeling miserable. Breakfast went down fine, so I figured I'd race. I didn't feel particularly weak during the race, but I was definitely tired - I expect that the whole starvation diet thing of the last two days wasn't doing much for helping my muscles recover. I've never had a reaction to altitude like this before, it was a little scary, but I'll blame Monday's hard workout. Hopefully after a couple days of regular eating, I'll feel good in the races this weekend. I already felt peppy skiing this morning. Wooooo skiing! Even feeling like there was a monster trying to get comfortable in my stomach the past couple days, the skiing has been great! 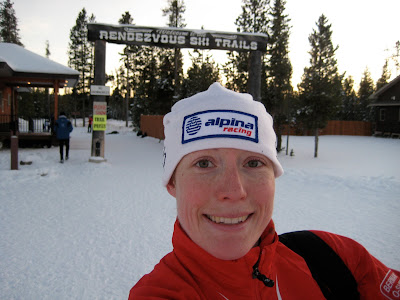 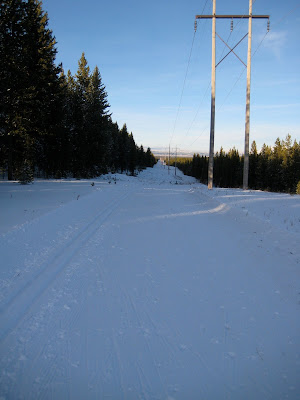 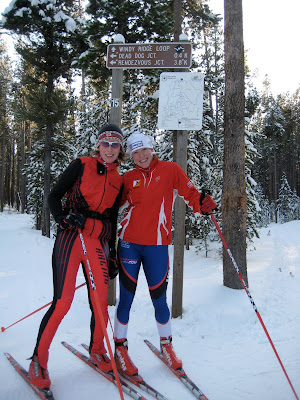 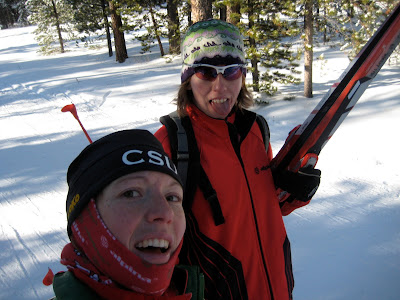 The subject matter in these photos is getting a little... dare I say, old? Jess, me, or snow, in any combination.
Posted by Alex at 3:02 PM