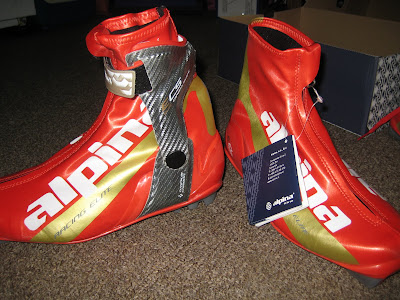 Although I haven't used the classic boots yet, the skate ones are bees knees. Do people still use that expression? The outer looks similar to last year, but there is more padding on the inside and inside the cuff and the heel fits a lot closer - these are some good changes. Even the classic boot feels like it'll be comfortable for 3+ hours! (I may not have skied in the classic boots, but I've certainly pranced around the house in them. What, thats not normal?)

I'm leaving for West Yellowstone in two days, so it was with some relief that I finished my last rollerski workout this morning (hopefully I won't have to pick them back up on Dec. 1... ). Skied to work, just because there wasn't time for anything else, and my favorite comment was "I have never seen anybody doing THAT before". The nice thing is they've repaved most of the storrow-side bike path, although I did almost get squashed crossing whichever bridge it is that doesn't have a crosswalk. Something should be done about that.

A lot of my energy in the past couple weeks has been going into planning the US Ski Orienteering Champs this winter. There was one weekend with no ski races planned on it, although by now there are some planned, over President's day weekend, and I was dead-set on holding the champs that weekend, in hopes of attracting some skiers. We had some pushback, but I think we're all in agreeance now that the event is actually on the schedule. So if you're a skier who doesn't have anything else going on that weekend, stop by Craftsbury to try it out. We have six loaner map holders, which makes things a whole lot faster and easier.

Good luck Alex. The rest of us will be tuning our bikes for the remaining 3 weeks of CX!