That stands for the Golden Leaf Orienteering Festival, but I prefer to say GLOF. I wasn't planning on racing here, but then I got one of those emails telling me about a sale Jet Blue was having on one-way tickets from Buffalo to Boston, so I bribed some people with cookies, secured a ride to the airport, and signed up for one day of racing. The reason for not spending the whole weekend was because I wanted to be in Boston on Sunday and Monday, coaching and hanging out with Ed. This seemed like a good solution. Have I mentioned that I'm a pro at making simple travel plans incredibly convoluted?

Ali and I were going to stay with my parents in Rochester, so we left at 3pm, looking to get there by dinnertime. Somewhere near Albany, 2.5hrs into the drive, Ali looked and me and said "we need our passports to get into Canada, don't we." Yup. We'd both managed to forget them. So, we turned around, picked up passports and a burrito in Amherst, and headed back towards Rochester. That made for a short night, since Saturday we left at one of those hours of the morning that shouldn't exist. Anyway, with a passport, the border crossing was smooth, and we arrived at the race site with over an hour before the race. Cake!

The morning race was a sprint, it was billed as a World Ranking Event (WRE), but the women didn't have enough runners with good enough points for the race to count as a WRE, which was a real bummer, but it was still a really fun sprint, with good route choices and beautiful forest. I sort of hobbled through it, never moving all that fast, which was frustrating, but less frustrating than if I'd been hobbling around an urban sprint. After a couple bobbles in the beginning, my technique smoothed out, and thanks to some smart route choices near the end I finished 2nd, behind Ali. Yea CSU! Results, and Winsplits. 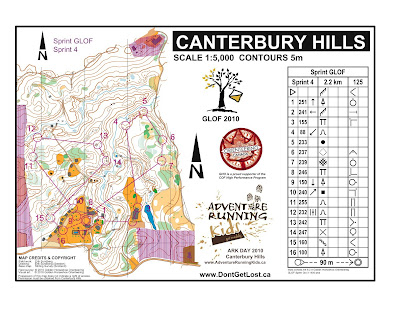 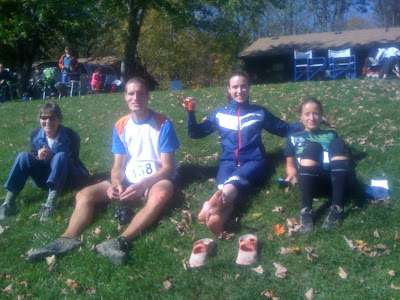 Now I remember why Ali and I get along so well. 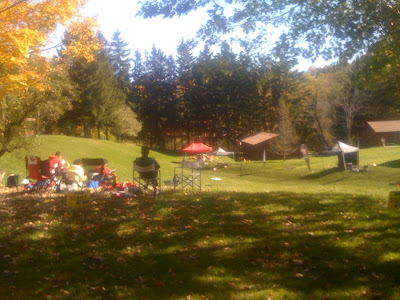 Folks waiting for the Middle to start.

A quick bite to eat, and the second race of the day was a middle distance. I'd asked the organizers for an early start for Greg Walker and myself (Greg being the guy I bribed with cookies to get me back to the Buffalo airport), so we started an hour early - at least they had the controls out! I decided that since my knee was sore from the morning, I would mostly hike/powerwalk my way through the course, but I would have to have a perfectly clean run to be competitive doing this. So then I made a mistake on the first control, talk about a rough start, but overall I just was moving too slow out there to be competitive. I ended up 6th, in the middle of a good pack of women, but it was frustrating to not be able to attack the course. Results, and Winsplits. 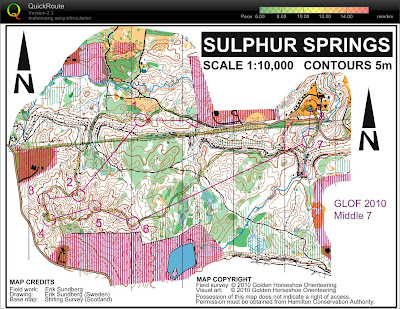 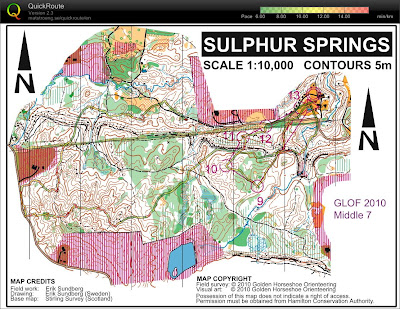 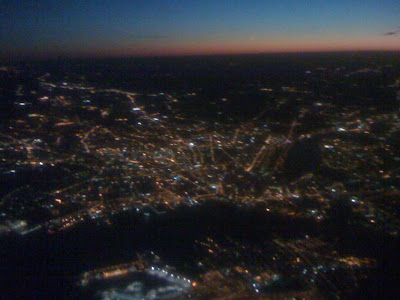 Boston was beautiful from the air. Too bad Ed's old iphone that I use as a camera is so worthless as a camera.

So I packed up all my stuff and Greg drove me to Buffalo, I got on a plane, and Ed came to pick me up at the airport. It was just starting to feel like another day in the life, no biggie, its all good. Ed asked if I wanted to go out for dinner to Chinatown, that sounded good, so we parked down at his office in South Boston to take the T back in. I had to use the bathroom, so we opened the door to the warehouse, and I think my exact words were, "Ed, is it supposed to be raining in here?" I've since been informed that it is never supposed to be raining indoors. Apparently, a 3" sprinkler pipe had broken on the 4th floor, and when we went to check out the upstairs offices, there was 2" of water on the floor. That's fun.

You are NOT in charge of preparedness this winter!! Don't forget the passport again when you go to MSA.....