CSU held another A meet this fall, just one day of it, as part of the New England Fall Foliage Festival. NEOC held Sunday's meet, and we helped out at that one too, but most of the stress was surrounding the CSU meet. Ed was in charge of everything, because when you're really good at something, you end up doing it instead of someone else who is less competent, and he kept being good at everything, which was great for most of us and not so great for Ed. Anyway, the format was a qualifier race in the morning, and then a final heat in the afternoon, both middle distance races. This made for some headaches for the organizers (Ed), but it all went off relatively smoothly, with music, announcing, live results boards, and lots of other high-tech sort of innovations that other sports take for granted and orienteering is just figuring out. The cutest part was definitely that Saturday's awards were towels, and Sunday's awards were soap. Not like its a subtle hint or anything... 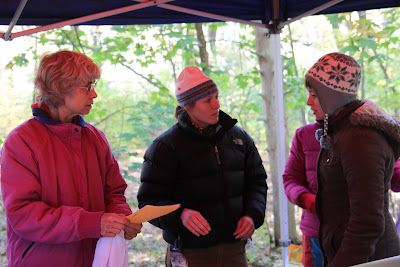 I was on registration. That went pretty smoothly, but it also meant that my head was still in registration mode when I started running, at the end of everyone else's starts. My knee is certainly not healed, but I figured the morning's course was short enough that I couldn't do any real damage, plus, I'm sick of not running. So I headed out into the forest, and actually had a pretty decent run, other than totally blowing #1.

Splits. I managed to pull off a 6th place, despite feeling like my lungs were working their way out of my chest and my legs were exploding - somebody is a bit out of shape. It helped that I orienteered pretty well, I guess that's the main point. I quickly changed into non-running clothes, to discourage myself from doing the second race, even though I had just sneaked into the A-final. No point in pushing my luck with my knee. Back to race organizer mode, who needs a cooldown, anyway? 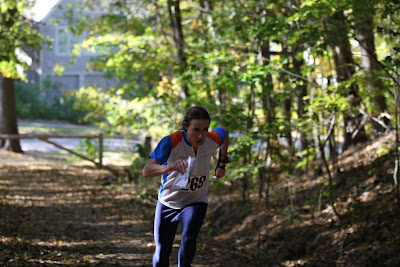 This is Ali finishing. We can pretend its me, I totally have legs that long. 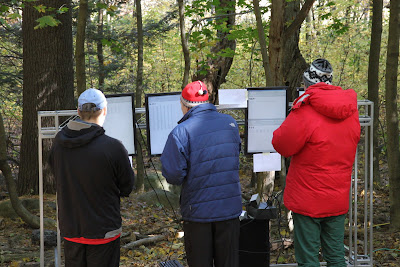 After finishing, first, you check results (on the awesome live results board). 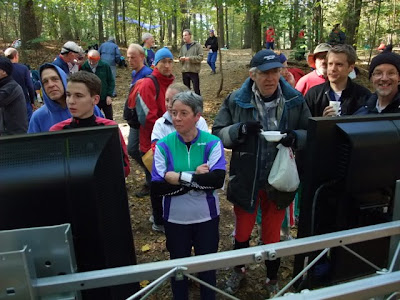 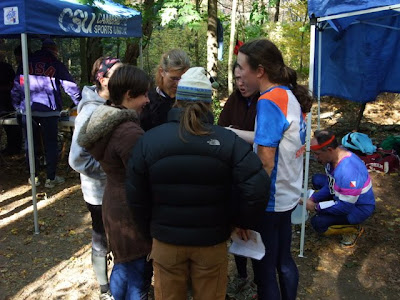 Then, you post-race huddle and go over splits, talk about your race, and discuss routes. There is an order to these things, a tradition that cannot be broken. 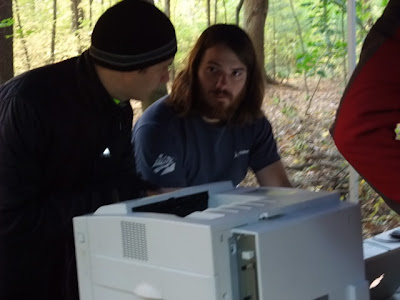 Meanwhile, Ed scrambles to make sure everything is still running smoothly. We need like six Eds for race days. 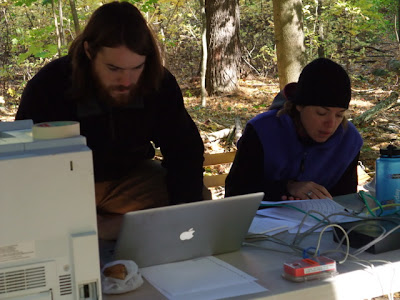 Ed and Sam worked together really smoothly to get the second start list put together in record time - Sam and I were talking afterwards, and if I had been in Sam's place, or Ross (Sam's fiance) in Ed's place, there would have been screaming and tears from all parties, but when its not your significant other, you aren't really allowed to throw a hissy fit, and things end up going so much more smoothly in high-stress situations.

Sunday was NEOC's meet, out at Baldwin Hill, near Winchendon MA. Luckily there was an indoor area for registration/results/download and for people, because it was windy and cold and raining, unlike the beautiful sunny October day that Saturday had been. I worked registration again, but it was right next to download/results, so I got to hang out with Ed all day, much better. 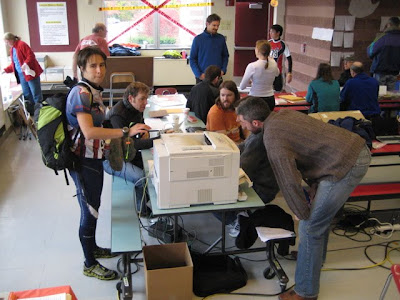 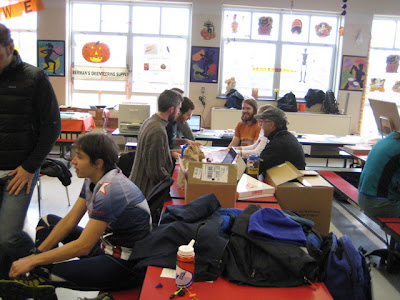 You can't really tell, but we're playing boggle. Things were so much more relaxed on day 2.

Another A meet is history - next time, it'll be even better! We're already talking about WRE status, inviting over Euros, and making it part of a huge east-coast fall orienteering festival. We have to clone Ed first, though.
Posted by Alex at 9:51 PM