I basically took two weekends this weekend. The first weekend started Thursday, and I headed to VT, because Ed was there, and it rained like five inches and we spent two days getting his truck unstuck from some serious mud, but mostly hiding inside reading books and avoiding the rain and damp and cold. Overall, a good time. Although attempting to pull out the truck in the dark, in the rain, with a jeep that had an electrical problem so required constant jumping every time it would stall because the clutch was dying, that wasn't exactly what I'd been envisioning, but its sort of part of the package that comes with Ed.

So Saturday I headed south, dropped my car in Amherst and took a train to Hartford (woo! trains!! I was excited), where Ross and Sam picked me up and we ended up in White Plains, at Neil's house, and Boris and Ben joined us for some delicious lasagna courtesy of Ross, and many games of boggle and that stupid dice game that Neil really likes. Woke up early and we headed to the Highlander, in Harriman state park, on a gloriously sunny, brisk fall day. I elected to do the Lowlander (half the distance), because I'm broken, and it seemed like less of a bad idea. The best idea would have involved staying in VT and maybe doing a 20min jog, but orienteering at Harriman is too much fun to miss. Second best idea would have been dropping out after the first map, but then I didn't feel like I'd have gotten my money's worth.

I watched the Highlander folks start, and then clumped together with the Lowlander racers, mostly West Point cadets, shivering a bit because long sleeves really would have been preferable. My goal was to mostly hike the course, with some jogging on trails and roads if my knee felt good. Off we went, and I was running. Dammit, stop running! Luckily there was a cliff to scale early on, so I stopped running, but with people around, its just so hard to walk! The first leg was a long one, and by control 1 I was with an Army runner and an older fellow who was breathing quite heavily. I figured I'd drop the heavy breather at some point soon, at least I hoped so because loud breathers can be really annoying when you're barely cracking a sweat. There was a beautiful stretch along a hillside to 2, and again I couldn't help myself, I ran. It felt so good, made me so happy. 3 was a downhill leg, but thicker vegetation, so I convinced myself to walk, and my knee was starting to ache a bit. That would have been a prudent stopping point, but I am anything but prudent.

Things went smoothly until the route from 8-9, I was starting to catch some of the slower Highlander competitors (they'd gotten a 30min head start), and that got me excited. I was also sort of racing the Army kid, he was definitely faster, but then he'd stop to read the map, or zig and zag a lot more, so my slower pace, probably 2/3 aggressive hiking and 1/3 slow jogging, kept up with much less effort. Anyway, I lost contact with the map for a brief second, and when I connected again I was heading up a parallel rocky reentrant, and lost 4-5 minutes searching the wrong hilltop for a flag. Three more army kids caught up during that mistake, and pulled away depressingly quickly on the road run heading to the map exchange. 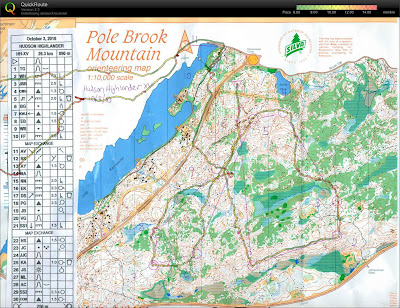 Intellectually, I knew it would be a good idea to stop at the map exchange, in the parking lot. Nobody would blame me, my knee would thank me, yadda yadda yadda I am so f***ing bad at listening to reason. I decided to carry on, the pain in my knee was dull, not sharp, and it had sort of plateaued, so since it wasn't getting worse, I'd just do less running.

I hiked up to #22, and found the three army runners who had caught up after my mistake at 9. They zigged and zagged a lot more going down the hill, and caught me again at the stream-crossing, but then I didn't see them again as I speed hiked up to 23. A little hesitation in the circle as I was lining things up, and then on to 24. Again, the terrain was just too beautiful to not run, so I found myself bounding down the little valley. Then I found a cadet lying on the ground holding his ankle and whimpering, so I stopped to see if he was ok. He couldn't remember if he'd heard a pop, so he probably hadn't torn through any ligaments, but he was whining about how he couldn't stand up. He did knew where he was, and he was very close to a trail that would lead to a road, so I handed him a sturdy-looking stick and told him to hobble out to the road and hitch-hike. By then his three teammates showed up and wanted to carry him out, so I left them to it.

Leaving 24, the same army runner I'd been competing with on the first map passed me, obviously unfazed by his teammate's brokenness. I out-navigated him again up the hill to 25, but then made a mistake at 26, and he caught me again. Luckily he was confused, too. We were cat and mouse to 27 and 28, although I got off my line to 28, lost contact, and probably lost 3-4 minutes standing in one place trying to make things match up. Dummy. Then the army kid made a huge mistake on 29, compared to my relatively small 1-minute error of examining the wrong cliff, and he didn't catch up through 30 or the finish. Woo! I ended up first woman, but I don't have the full results yet to tell you how many guys I scalped. Not a fast race, not perfectly clean, but I thought I executed most of my routes pretty well, which left me feeling satisfied. Was it worth it? Tough to tell, the knee certainly hurts more now than it did Saturday. Hopefully it'll heal fast. Dammit, body, fix me! 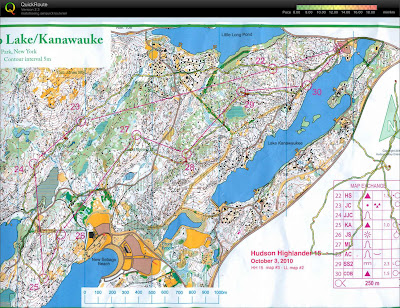 The Highlander racers looked really dead as they were coming in, even Will, the winner, was caked in dried sweat and shaking a little. That is a real race, I can't wait to be healthy enough to do it.
Posted by Alex at 10:39 AM