The Billygoat is probably my favorite orienteering race around, mostly because it is so low-key and silly. At least, it's supposed to be like that, it always seems to turn into a super hard, super long, super hilly, super contended race. This was the sixth Billygoat I've run in, and I think last year is still the best I've ever run - I ended up 21st last year, so I got my initials on one of the control codes. Not so good this year, I ended up 32nd, so unless we have tons of controls, I won't get a code of my own again. The U.S. team was doing a fundraiser race on Saturday - a team sprint, that ended up being a whole bunch of fun. I teamed up with Becky, and while neither of us had horrible races, I don't think either of us ran quite as fast or as clean as we could have. Luckily, there were no other all-women's teams, so we won, by default. 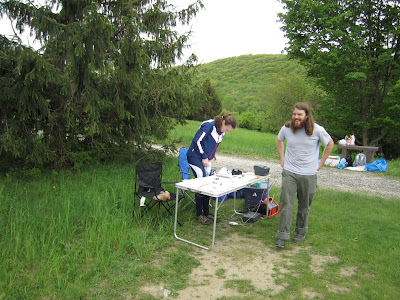 Ed came and helped with results, which apparently are a pain to do with the existing orienteering software. So he's planning to write his own. 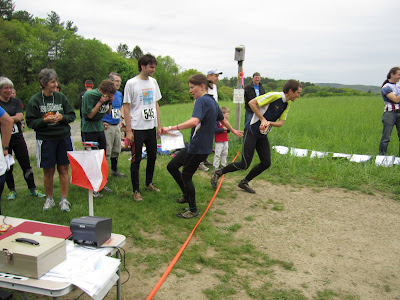 Katia and Giovanni tag off and head into another leg of the race. 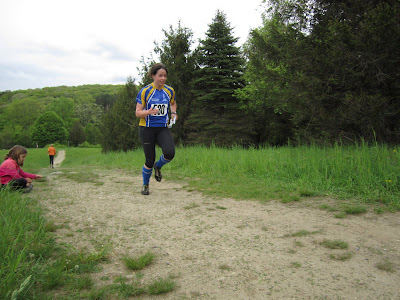 Becky finishing a leg of the race. 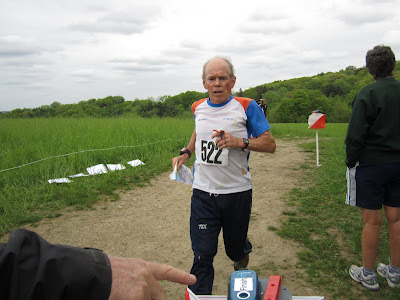 My nemesis from last week! Peter finishing the race. 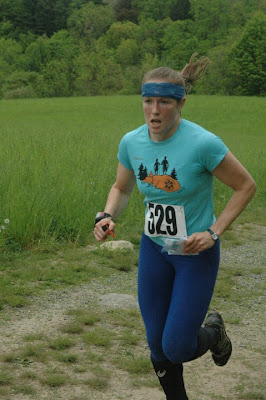 Uphill finishes SUCK. We got one on Sunday, too. 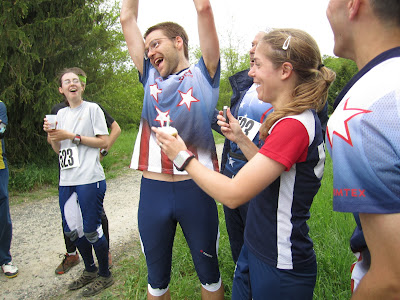 It was Ross's birthday on Saturday, so Sam made two different kinds of cupcakes, about fifty of them, all told. Peanut butter chocolate (with a reeses cup inside) and coconut. Ross gets excited when he's the center of attention. 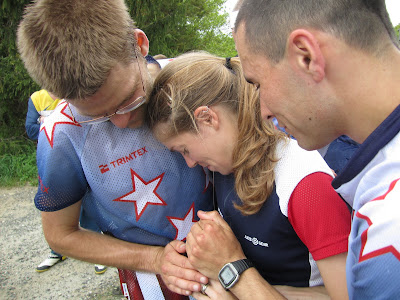 Attempting to light a candle, in a windy field. 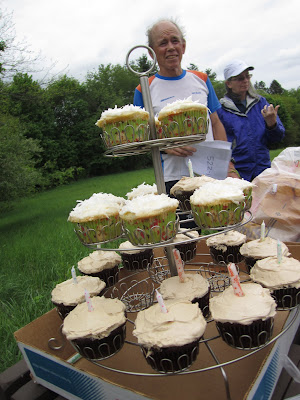 Peter and Gail guarding the cupcakes.

My calves had been in a lot of pain during Saturday's race, but instead of taking the time to massage them out and try to stretch, I went out for pizza and beer with all our orienteering friends, and wasted half the night playing boggle. Billygoat morning came too soon, and we drove over to Huntington state park in a serious-looking rainstorm. Luckily, the rain stopped by the time we started, but it was wicked humid. Ed had decided not to race to try and fix his ankle, so I left him my camera, and he took some photos of the march to the start. 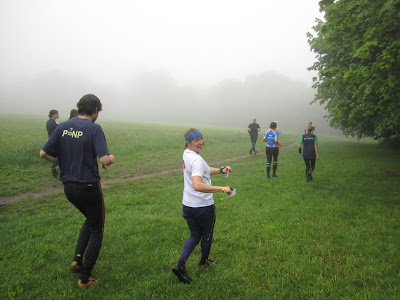 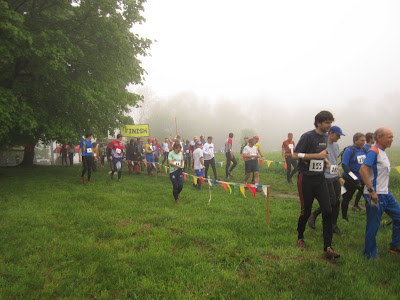 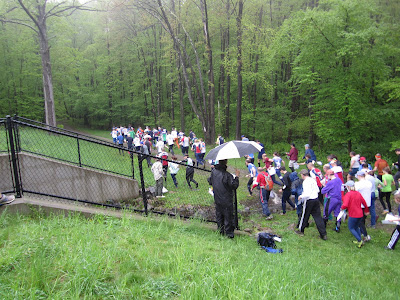 I started relatively fast, trying to hang with some of the fast kids. Pretty soon, though, just about as my heartrate inched towards my threshold, my calves made themselves known, in a burning sort of fashion. Shortly after my trail run to #3, I knew I was in trouble. My shin had gone numb, too, but I could still sort of use my quads, so I kept up with Becky and Hannah a little longer, stumbling and tripping with every step, since I couldn't tell what my feet were doing. But on a hill up to #5, I was done. I wasn't going to finish the race at this speed. Depressed, angry, and frustrated, I started walking, willing my calves to relax. 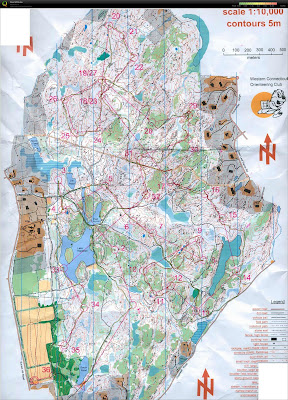 We chose #2 to skip - not a bad skip, but it was early in the race, so later on, we knew our pack was going to be able to skip a control and we'd have to hit them all.

After walking to #7, I tried running again to 8, and promptly made a parallel error involving marshes and reentrants. So I walked a little longer, and finally by #9, I could run again without my calves blowing up. Woo. I started jogging towards 10, and a group of old-but-accurates caught up with me. I decided that I didn't feel like running with them, so tried to run away, but the problem with orienteering is that it's really hard to open a gap, since your competitors can see where you're running, and they'll be able to run faster because they don't need to navigate as much as you are, if you're in front. So, the group stayed pretty together, and then Becky reappeared, from behind me. Turns out, she'd just turned her ankle and had a pretty negative spell, and was thinking of dropping out of the race. Since we are pretty similar in speed, I convinced her to keep running, if only so that we could both have company for the rest of the race.

So, we started running together, and chatting to each other, and life got a lot better. By #27, I was feeling spunky again, and so was Becky, so the pace went up, and my calves seemed to be cooperating. We bobbled a bit around 29-30, but we were ahead of our group. But, then they skipped #31, and we were behind them, with tired legs. We could see Peter and Angelica and Kseniya ahead of us on the trail to 33, but being tired, neither Becky nor I saw the fast, southern option to 33, and we lost about a minute and a half to our competitors by taking the little windy trail around to the north. Boooo. The last couple controls were fine, navigationally, but I was exhausted. When we finally hit the finish, it was up a hill, an insultingly steep hill, and I had doubts that I would make it up without collapsing. The photo shows Becky telling me there is no way in hell she is going to let me walk up the hill, so I made it up, jogging, but definitely should have taken in more calories around 1hr in. 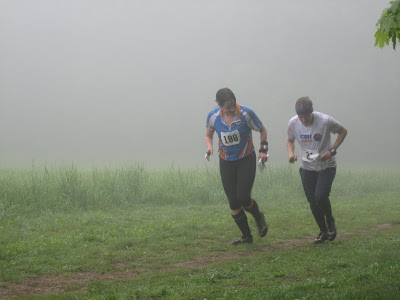 "Becks, I think I'm going to have to walk this uphill". "No way am I letting you do that!"

Overall, we ended up 7th and 8th woman (Becky let me win the "sprint" for the finish), so not great, but, it was really fun to run with a partner, even if both of us weren't really in it with a fighting spirit for the last two thirds of the race... But now, time to take care of these calves. Foam roller torture time.
Posted by Alex at 8:20 AM