This last weekend was an A meet down at West Point, and we had great weather, great courses, and a really fun time. Ed and I drove to Poughkeepsie Friday night to stay at Ali's parents' house, and along the way found THE worst Chinese restaurant I've ever been to. I suppose I shouldn't be surprised when the name of the place is "Tasty China restaurant". Well, we didn't get sick... 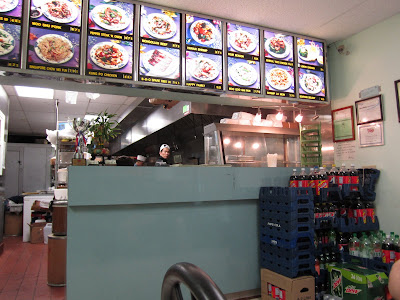 Saturday was sunny and pleasant, and we had two races on the agenda: A middle distance and a sprint. The terrain around the campground (nice central location, and most people were camped there) was pretty crappy, I thought - lots of dead trees down, lots of knee-high woody shrubs, and lots of rocks underfoot. But the maps were alright, and the course was nice. I had a really crappy run, just couldn't get my body to cooperate with what my head was telling me to do, and while I did have some decent legs out there, mostly I was just not thinking very hard, and paying for it by hemorrhaging minutes to the winners. Sigh. More whining and more details on my training log. 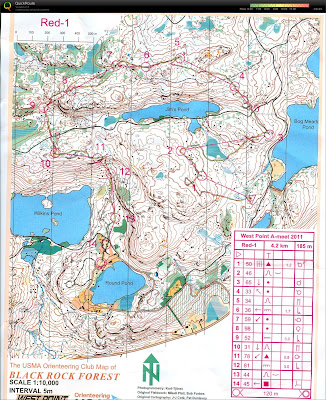 Soon after finishing, it was time for the sprint, which really was just a shorter middle distance - not all that high-speed except for the end. 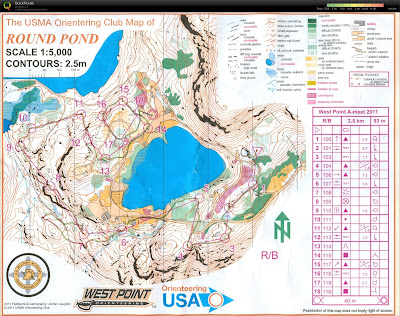 I made a horrible mistake on #7, basically messing up the scale of the map and way overrunning the feature, but managing to make things make sense in my head anyway. That put a damper on the rest of the course, because when you lose 5 minutes in a 20min race, you're out of it. Kind of disappointing, but the day was so nice, and it was so much fun to hang out with everyone, that I was in a good mood by the time we left, anyway. To top it off, dinner at Ali's place used 11 avocados, for 9 people, so life was pretty good, all in all. 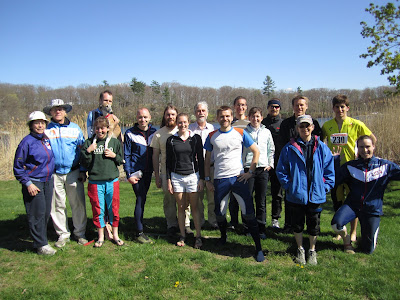 We had a very large crowd of CSU runners at this meet, so tried to get a photo of everyone. Unfortunately, we couldn't round up a couple - this photo is missing Peter, Ken Sr, Ken Jr, Brendan, Pia, Mark, Tor and Lukas, Bill, Dean, and probably a few more. Still cool to have so many from the club all there! 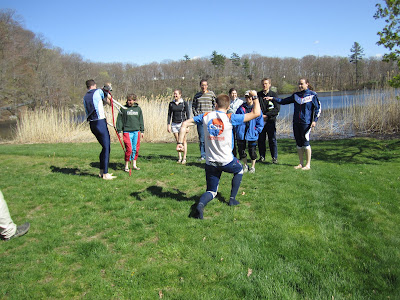 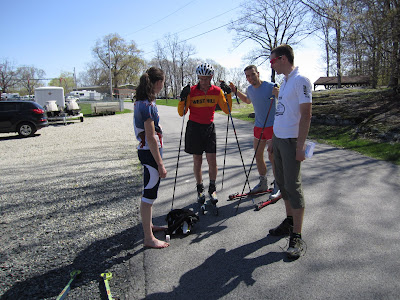 Ken is a crazy old man, so he brought his rollerskis, so naturally Nikolay went out skiing too, as well as a couple others who would fit into Ali's boots. Mixing sports! Ahhh! 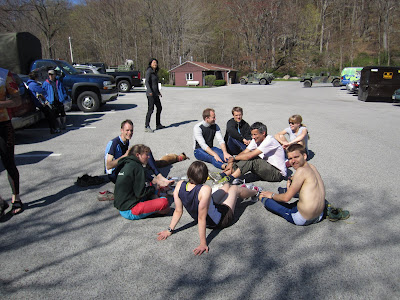 Much lounging about on the pavement, as per usual. 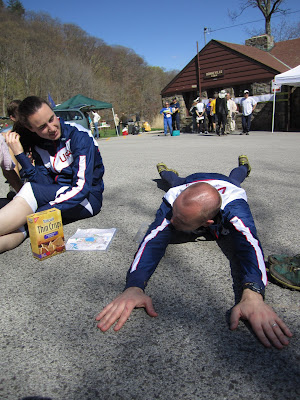 Clem took it to a whole new level, but in his defense, the pavement was wonderfully warm. Of course, pavement lounging can quickly be interrupted when a cadet comes over and tells you that a Hummer is coming through so we'd better move. Right, we're at West Point. Actually, you could hear the firing range from all the points on the course, kind of a reminder not to get TOO lost... 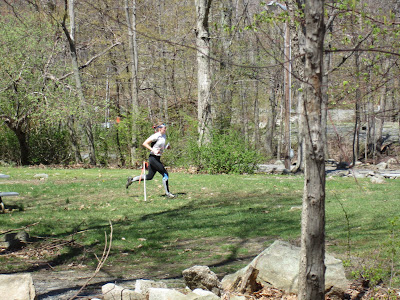 Some photos from the sprint, courtesy of Ed. I don't look very fast compared to Ross or Ali, but I guess I wasn't that motivated after my 5min mistake. 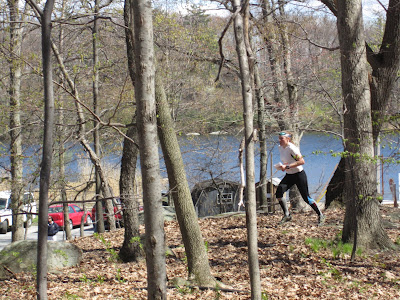 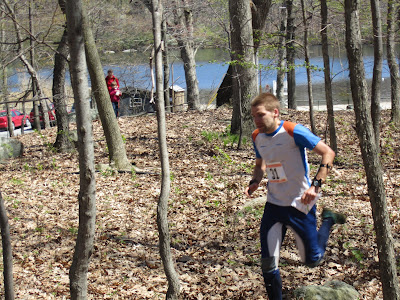 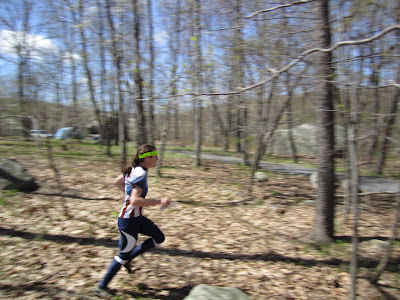 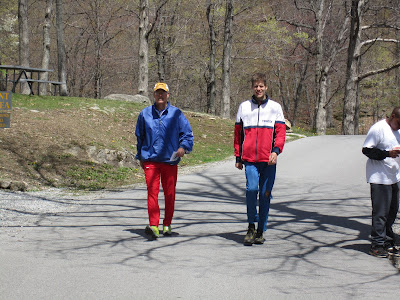 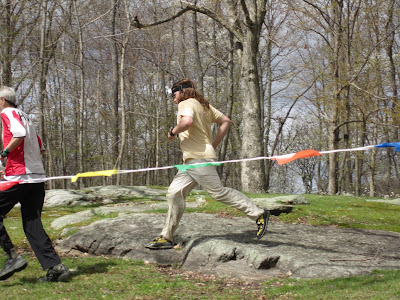 Ed finishing the middle race in the morning, with his fancy new headcam. That he won't let anyone watch because he doesn't want anyone to see all his mistakes. 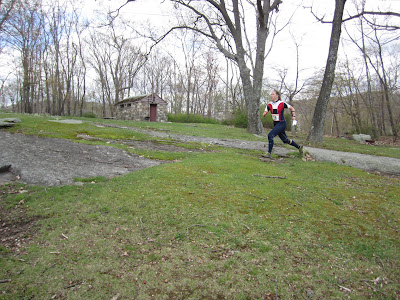 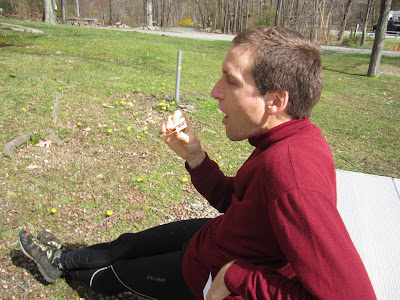 Giovanni made himself a chocolate sandwich - two pieces of bread and some chocolate in the middle. Why haven't I thought of that yet?

Sunday was the long distance race, and it certainly did feel pretty long and hilly. Luckily the terrain was a lot nicer - more open, with many fewer rocks. I had a much better race, very solid navigationally, if not exceptional, and only made one questionable route choice. On paper it looked good, in reality, the terrain over there was just slower. Details. 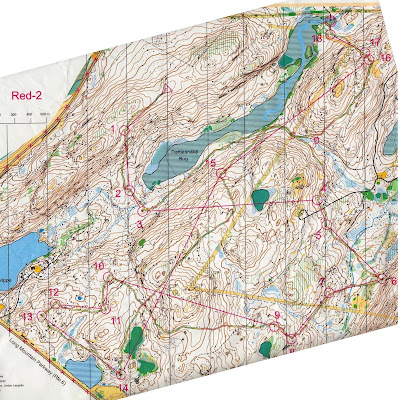 I ended up 5th for the weekend, which isn't too bad, but that's the trouble with expectations - they keep rising, while your performance has ups and downs and just won't keep pace with those expectations. Ah well, I have some time to train between now and the next big race, at the end of May.
Posted by Alex at 9:27 AM