The Buffalo Orienteering Club hosted the last events of the Canal Cities Orienteering Festival, a weekend A-meet consisting of sprint, middle, and long distance races. The first event was the middle distance, at Sprague Brook Park, and I was a little anxious - I knew it was a pretty thin field, in depth, but with both Angelica Riley and Galyna Petrenka (a Ukranian-born Canadian, I think) racing, I had my work cut out for me. I had calmed my nerves before I started, but still managed to do some silly stuff on the way to the first two controls. Things smoothed out a little after that, but not by much - too much stop and go, and I was thinking too much about running fast and not enough about orienteering well. Luckily, I only lost major time on the 12th control, and Angelica and Galyna both made bigger mistakes, so I ended up in front! I've never won an A-meet day before, so I was pretty psyched. 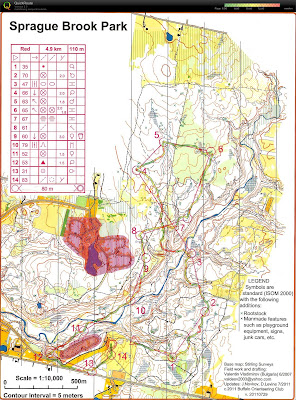 Middle distance results, splits (you have to click on the class - I'm in F21).

After a brief break, we ran the sprint race. It was over by the camping area of the park, and almost all across open grass. A tough task on a humid day. I had decided that I wanted to run a little more smoothly than in the morning, and headed out with the goal of cruising through the first few controls, but always staying in contact. Unfortunately, I didn't really have much oomph working for me, and the cruise-y pace I was trying to hold actually took a lot of work. But, I was spiking my controls, and moving really smoothly, so I was feeling pretty good about myself. Starting around #8, I began to run into some serious oxygen debt - coincidentally, this was also the point where I actually had to go uphill - by 11, I was listening to some pretty heavy breathing, and not all that surprised to discover it was me.

As I approached 12, I unfolded my map a little more, and discovered, much to my surprise, that we had 17 controls on the course, not 14. There was a whole extra lap around the little pond! I focused on this lap, making sure that I knew how I'd be approaching the controls and how I'd be leaving them, and looking around to make sure I could see the features in this open land. As I did this, I ran a beautifully straight line from 13 to 15, completely missing 14 - completely didn't see it on my map. The last few minutes of the race were exquisitely painful, from the anaerobic point of view, but I punched the finish feeling good about myself, if completely wiped from the hard effort in the hot sun. It wasn't until I downloaded the information from my e-punch that I discovered I'd skipped a control. Dammit! It wasn't really worth getting upset about it, but I was disappointed with myself - shouldn't have gone into quite so much oxygen debt. In a woulda-shoulda-coulda world, I probably would have finished 5-10 seconds in front of Angelica, for the win. Instead, I was disqualified. Well, one more day to redeem myself and try to win the weekend overall. 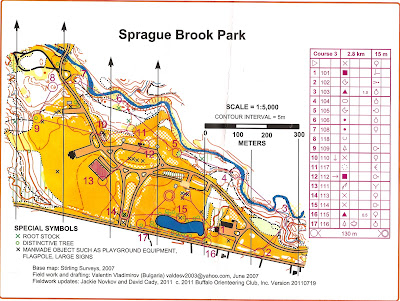 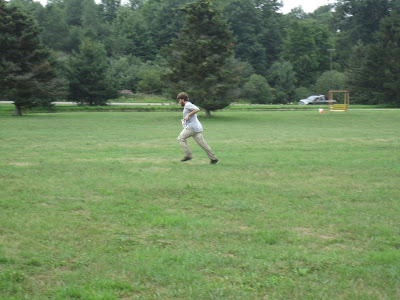 Ed dashing across the field in the sprint. He has acquired a vuvuzela from Ross, and plans to bring it to WOC; I practiced it on him whenever I saw him in the sprint, and I think it made him run faster. I still would have beaten him, in the woulda-shoulda-coulda world...

The long distance day dawned even more humid than the day before, and I could feel the efforts from the day before sitting heavy in my legs. I did a short warmup, just to make sure I didn't break myself, and then decided that my focus for the day would be on running consistently, none of this stop-and-go sprinty stuff. I didn't feel sharp, either mentally or physically, and this became clear when I blew three minutes on the first control. I just wasn't really paying attention. Eventually I saw Peter Gagarin heading towards where it should be, and I went and found it too, but that was immensely frustrating. Things went pretty well for a while after that; I was doing a good job running smoothly and not slowing down, but by #10 I was really starting to feel the heat.

My route (below) shows the progression of tiredness - anything uphill is getting slower and slower, and eventually, I made a mistake. Heading to 14, I started dropping contours, even though I knew I shouldn't, but it was just easier to go downhill. After nearly running off the map, I realized I was doing it wrong, and went back to the control, but that was a serious mental lapse, about 4 minutes lost there. Another couple good legs after that, but then my brain shut off on the way to 17, and I didn't pause to verify my location when I crossed the trail. This cost me another 4 minutes, easily, as I wandered deliriously through the forest for a while. From there it was just a slog back to the finish, and I sure wasn't moving fast. Turns out I was slow enough for 4th place.

Overall, I'm conflicted about this race. There was some good orienteering in there, where I was being really sharp and on top of my shit, but then there were those three major mistakes, that basically lost me the race. You can't be competitive with 11 minutes of mistakes! Hopefully, this tiredness will pass with some rest, and I'll be sharp for WOC! I ended up 3rd overall on the weekend, which was good enough to win me a pretty painted pitcher. Never won a prize at an A-meet before, either - cool! 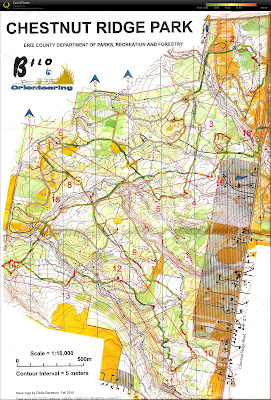 Results from the long distance, and splits.

I'm currently in the Logan airport waiting for my plane to Lyon - on my way to France, for the World Orienteering Championships! I'm a little concerned about both my fitness and this consistent tiredness, but hopefully an easy week of training before this weekend's race will do me good. In any event, I can't wait to meet up with the team and get into the maps here!
Posted by Alex at 8:36 PM