The Middle distance qualification was was the second one I was slated to run, and after seeing the model area terrain, I was worried it would be so technical I wouldn't know where to start. It wasn't actually that bad, which was kind of disappointing, since I know I don't really have the speed to run with these girls, but I was hoping I'd have the technical oomph. It went really well, though, and that left me in a great mood.

I decided to focus on the "safe" part of my mantra today - I wanted really solid attackpoints, after yesterday's little 10-minute detour. Spiked the first control, and then got very lucky on the 2nd one. I wasn't quite where I expected to be, but it turns out I was where I should be, and there happened to be a control with my number on it, so I just punched and moved on.

I took the trail to 3, all the way to the little trail, but this lost me a lot of elevation, and probably a minute, maybe more. Spiked the control, but I'm not fast going uphill. Pretty good to 4, and then a long leg to 5 - I actually lost the least amount of time to Ali on my long trail legs, which is sort of backwards compared to what you'd expect given our perceived strengths and weaknesses… Anyway, took the middle little trail, and that worked out.

Comparing splits with the girls, I managed to lose about 20 seconds to the camera control; I think I just have an aversion to climbing hills fast. But #7 was good, and then I took the trail out to the road to get to 8, so that went pretty well. A couple moments of doubt as I pounded down the trail, but I just kept reminding me to trust me, and although I probably lost time because I had to climb up 7 contours at the end, I think the simpler route was faster for me. But then I lost another 20 seconds going to 9; hesitating and trying to go straight, instead of blasting back north to the trail and in to 9, where I'd seen it on my way up. Silly. And then I lost nearly 30 seconds to Hannah on the bashing-out-to-the-road control, I should have just bashed straight down instead of trying to cut it shorter.
Splits

And some more photos... 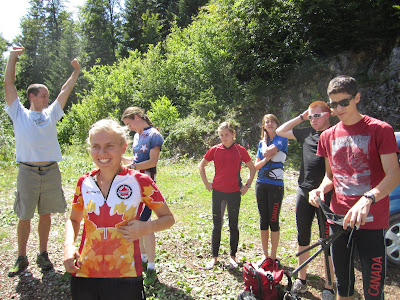 Greg and his posse of Canadians (+ Ali) before one of our training days. 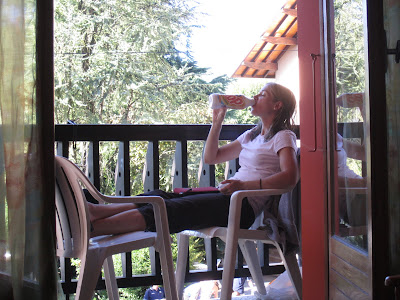 Sam chilling on our nice balcony with a yogurt drink. 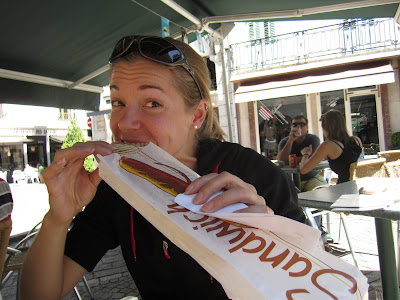 Little girl with a huge sandwich! 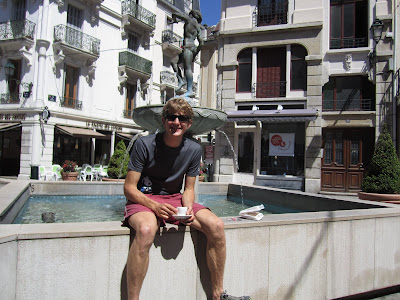 Mark with a tiny espresso (Sandra's hubby and one of the world's best orienteers and mountain runners). 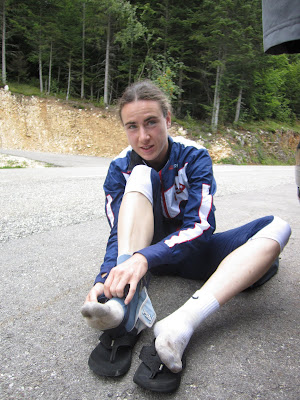 Ali getting all set for a training run. 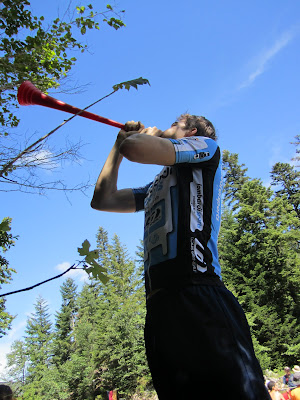 Ed brought a vuvuzela to the races, and here Sergei is practicing making noise on it. We would usually send Clem to the edge of the forest to summon in our runners... sometimes, that worked! We did get yelled at by a photographer who couldn't hear his shutter clicking with all the vuvzela-ing, so had to take our act somewhere else. Enthusiastic cheering! 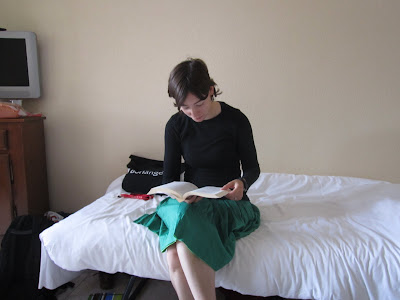 Hannah manages to demurely sit and read her book, while we carry on general shenanigans around her. No wonder she is good at orienteering! Focused! 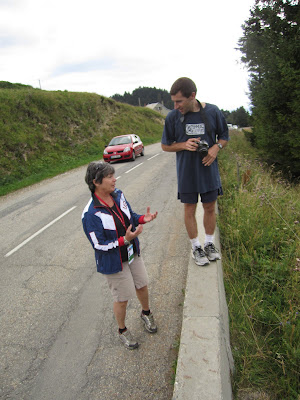 Driving back down to Aix, Beatrice and I found Eddie standing on a guardrail taking photos of the view. Eddie is a real superfan, and also takes some really nice photos. it's been great having as many superfans here as we do - Peter and Gail, Eddie, Clem, Sandy, Barb and Dave and Izzy, Greg, Boris, Cristina, Ed, Wyatt's whole family, and probably more that I'm missing now. So much support! 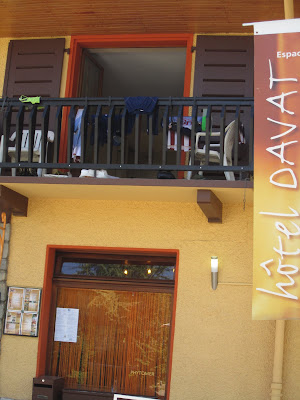 Yes, our laundry hangs over our balcony... isn't that what balconies are for? 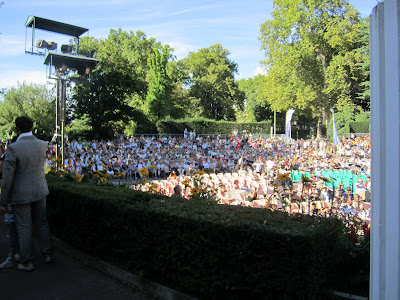 The crowd at the opening ceremony. Orienteering is actually a big deal here. As evidenced by the 4000 spectators running in the O' Festival, I suppose. 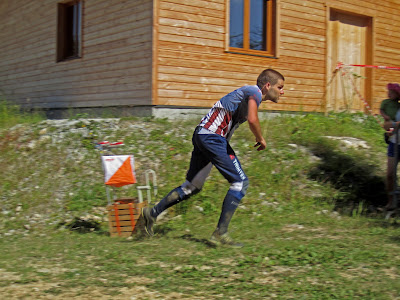 Ross leaping away from his last control on the long qualifier.

I am totally digging the new background. Very cool. I admit, the orienteering blog material however doesn't keep me anywhere near as entertained as the ski, bike or even rollerski stories. But who am I to say!