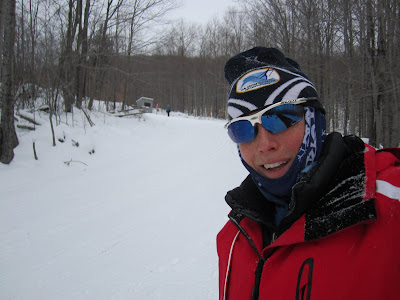 Sporting a Harvard jacket.
Last week, Chris City, the head coach at Harvard, approached me to see if I could assist him for the rest of the season. Being a sucker for people who need help, and also needing the cash, I signed up for yet another job, and now am an employee of the big H. I did actually think pretty long and hard about this, but in the end decided the pros outweighed the cons, and the commitments weren't overwhelming - I gave a very take-it-or-leave-it offer back in regard to my time, and Chris took it. One of the cons of being a last-minute addition to a ski team, of course, is that it'll be hard to build any rapport with the skiers, but they're a nice group of kids and so far we get along fine.
There's also the fact that almost nobody coaches two ski teams at once, but as long as there isn't any overlap, I think I can manage this. Given that I'm missing the next two carnivals to go to California (I'll get to that), I'm missing the one carnival that is also an Eastern Cup, where the only awkward overlap could happen. Nothing if not a master juggler, here.
So last weekend I headed back to Rumford, this time driving a Harvard van, for the Bates Carnival. It's been a while since I was on the carnival circuit, but not much has changed. The coaches meetings still deliver a solid 15 minutes of information jam-packed into an hour, the head coaches are all the same folk, and the skiers are just as speedy. Friday was a 5km/10km skate, and Saturday was a mass start classic 10km for both men and women. Chris and I quickly developed a working relationship in the waxroom, and ripped through testing and fluoring the skis with enough time to get out and watch the races. I know one of the girls from before, and I coached one of the boys as a junior at CSU, so at least with them I could scream my head off, as I'm wont to do; the others I held back a little with the cheering because I didn't want to scare them too much... 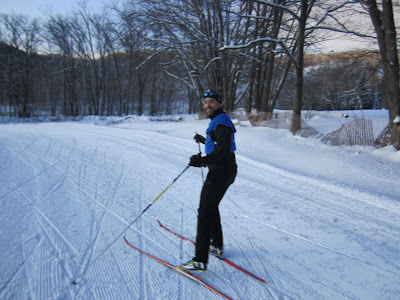 Testing wax with head coach Chris City.
The following day was the mass start classic race, and luckily the waxing was really easy; that's always a worry when it's mass start and you have 11 pair of skis to do. But the skiers performed, and although there are always crushed expectations in the first carnival, I think it gave us a really good handle on where we are, and where to go from here. Mostly, it's exciting - quite a future in this team! 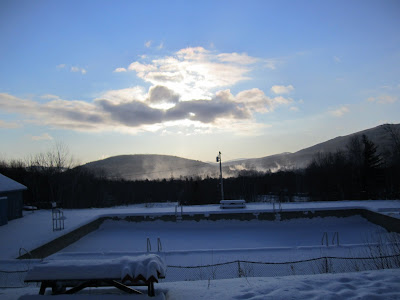 Steam rising from the river, looking toward the smokestacks of Rumford's paper mill... as the sun rose, you could see the hazy glow of light diffused through smoke. Very pretty, but disturbing... 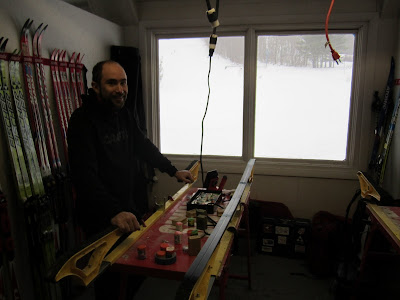 Rumford wax rooms are sweet. Love waxing indoors, and so do my hands. I get such wicked dry skin when I have to wax outdoors, and cuts all over my hands because I can feel a damn thing because my hands are frozen. So yeah: indoor waxrooms rule. 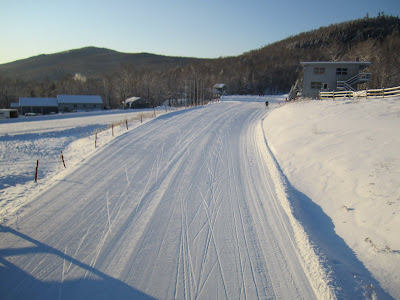 Slightly more snow in the stadium than during nationals. It was actually really great skiing, I snuck out for a workout after the race, and had a super fun time. 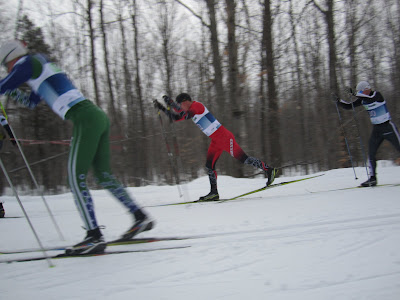 Chris Stock in the race. I coached him as a junior, and it's been really fun to see him progress. Actually, it's awesome how many CSU juniors were out there racing for D1 colleges - Chris at Harvard, Hannah and Isaac at Williams, Chris Burnham and Olga at Colby, Hilary at Middlebury, Jimmy at Bates, and I'm probably missing some... anyway, it was really cool to see them all in the college race, and to scream my head off for them! 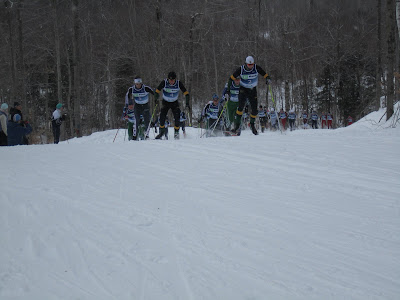 Men's pack up highschool hill the first time. That hill certainly separated the wheat from the chaff. 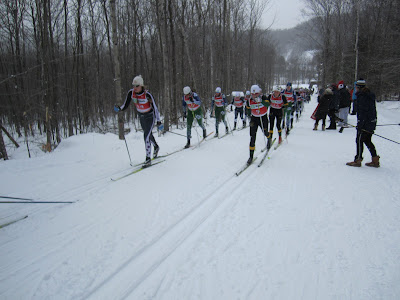