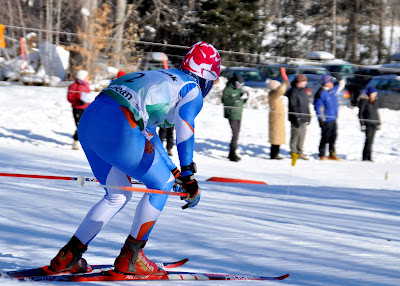 Photo credit Jamie Doucett.
After a super successful week at nationals, a week back home to recoup, and CSU was on the road again, heading back to Maine for a weekend of Eastern Cup races at Titcomb Mountain, in Farmington. Saturday was kind of disappointing for me - I couldn't get my head into the game. I regretted signing up for the race, because you have to do what you sign up to do, unless you actually have a valid excuse, and then after I qualified for the heats in 28th, I was resigned to racing a second time, because you have to finish what you've started. Just very unmotivated to be racing that day, and the course, a flat, double-pole power course, wasn't doing much to excite me. But a race is a race, and all races deserve to be treated with respect, and after doing a warmup running on the road, I'd at least thawed out my frozen feet and broken a sweat. Physically, I was ready.
Having the worst bib in my heat meant I picked my lane last, but I got a quick start, and managed to get into one of the three tracks after the scramble zone. Things stayed tight around the first downhill and across the flats, and then up the hill in the stadium, everybody was double poling, despite having wax on their skis. I moved into the middle lane and was able to kick double pole up to the front, but things were still really tight. As we crested the hill, Maria Stuber pulled away, being on skate skis, and the rest of us were in a tight pack down around the corner again.
Nearly done, I found myself in second place, and here I made the first of two errors - I chose the middle track, instead of the one on the left, despite knowing that there was a left turn coming up into the finish. Then I made my second error of the day - I remember thinking to myself, "make sure you end up third, because you don't want to have to keep racing today". That is NOT the mindset you should have in a sprint. I think this moment of hubris caused me to let up a bit, and the girl in the left track pulled even with me, two more girls close behind her. As we made the sharp left corner into the finish, they had the better line, more momentum, and I couldn't hold them off double poling. I was pretty disgusted with my mental state during that race, but put it behind me, determined to learn from my mistakes and never put on another bib if I'm not ready to treat the race with respect.
After an exciting night that involved both a fire alarm at the hotel and some serious insomnia, I woke up feeling like excrement. But I took the tough love approach with my head, and cursed myself into readiness, lying to me about how awesome I felt and how much I wanted to race up the alpine mountain six times. Unlike Saturday, Sunday's race featured a climb of ~50m up the alpine slope. The women did this loop six times, for 8.4km total. My goal for the race was to attack that hill six times, and keep the tempo as brutal as I could manage.
I was the first starter in the field of 114, so I had some fast girls starting not too soon after me. I hit the hill for the first lap, and decided that it wasn't so bad, because it was kind of gradual, at least compared to something like highschool hill. But of course then it flattened out drastically in the middle, and a good skier should be able to V2 that part of the course, and I sort of instinctively knew that if I V2ed that flat bit, before it tilted upwards again, I'd get mired in my pain cave and never emerge. So, I just jacked the tempo even more, not giving my skis any time to slow down, until I reached the top and did a U-turn and headed back down. The downhill was actually kind of scary; it was very fast, and there were some lumps and bumps in there that meant you couldn't really rest as much as I'd hope. The first time down, I caught an edge, and somehow managed to save it, but was cutting it pretty close to the outer limits of that turn. After that, every time down the hill I was frantically thinking: stay on your feet! stay on your feet!
The rest of the race was pretty uneventful, each lap getting more and more painful. Occasionally, earlier starters would pass me by, but then I'd slowly reel them in as reality hit. Going into my third lap, Maria Stuber passed me, from a minute back, I figured this meant she'd probably beat me by 3min, more or less, and she did. Although I'd picked up the pace to ride her draft across the flats, once I hit the hill I let her go - I had a pace that worked for me, and when you're pushing near redline, you have a limited number of times you can go over without paying the consequences. By the sixth lap, I was starting to get tunnel vision, and I was mildly worried about the descent down the hill with this much lactic acid swimming through my legs. Luckily, I made it, and hammered in to the finish pretty pleased with how I'd approached the race. I haven't felt that much good pain in a long time.
In the end I was 10th, and had almost perfectly even splits - nice. Just looking at the bit going around the loop (not the start of finish straight), I was 4:38, 4:38, 4:43, 4:42, 4:43, 4:41.
Sprint results
Distance results
Posted by Alex at 1:48 PM