Ali and I made it to Lake Tahoe! Some photos, and a story: 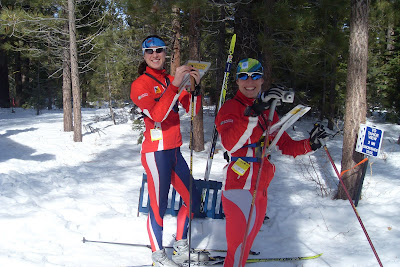 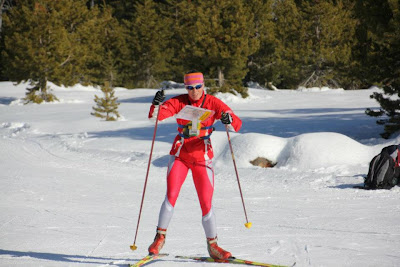 Training at the model event on Sunday, Northstar XC. 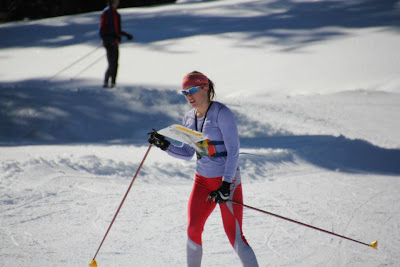 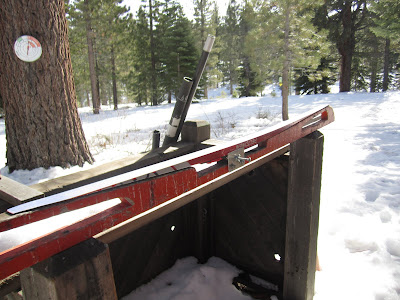 Waxing outside here is super nice. So warm and sunny! 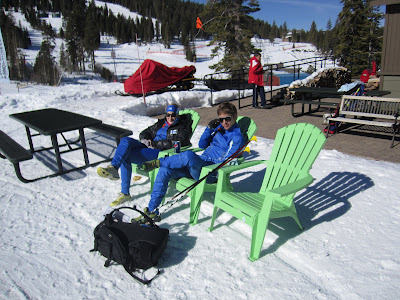 Some Finns lounging in the sun at Northstar. 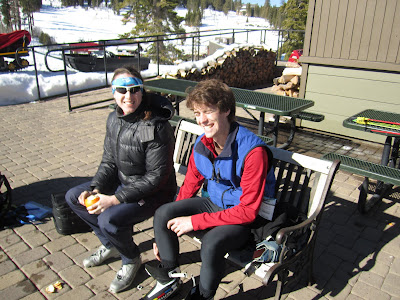 Ali and Brendan thought that was a good idea, and decided to do it too.
Today was the first of four World Cup races in the Sierras this week, a long distance race at Tahoe Donner XC. This is the first time North America has ever held ski orienteering races of this calibre, so the organizers were understandably a bit nervous. Ed is in charge of all the results gear, he's good at stuff like that. From the competitor's standpoint, the race went off great! I went over to congratulate Ed after on how awesomely he'd done, and he immediately started ranting about all the things that he thought went wrong. How do you live with a perfectionist? Sigh. At least first he congratulated me on my race!
The altitude has been a bitch to get used to - I'm still hunched over gasping for breath after a flight of stairs. Ali and I arrived Friday night, after a pretty long travel day, and our first two days were spent doing short, easy, skis, and trying to get used to this altitude. It's high. I also picked up a cold last week, which hasn't made the adjustment to this altitude any easier. By this morning, my heart rate was almost into the "acceptable to go train" range, so why not do a 17km race with 440m of climb?
The mass start combined women and men, seeded so that the higher-ranked skiers were in the middle. We had something like 35 men and 20 women racing - small fields, considering that there are 90 skiers signed up for the entire week of World Cups, but stacked fields. 16 of the top 20 ranked men in the world are here. Exciting!
My goal for the race was to avoid building too much lactic acid - I tend to quickly overload my muscles when I'm racing at altitude, and that, combined with the already-leaden feeling of sick legs, was going to make this race a slog. Luckily, it was hard and icy and fast, so at least I would have some speed to play with! I had a decent start, but of course we headed straight uphill almost immediately, since Tahoe Donner is all up or down. 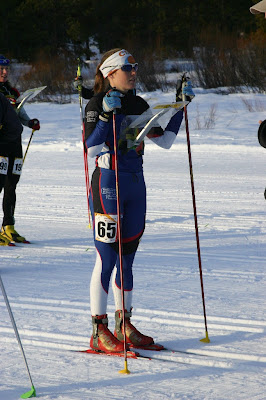 At the start. Photo courtesy of Eddie Bergeron.
This was hard, and I had to let a lot of girls get away from me. Thankfully, what goes up must come down, and I navigated the first loop well, coming through the map exchange in 3rd place, apparently. Of course, I had the shortest loop first, but still, it's fun to come through looking fast. Ok, maybe looking frazzled. 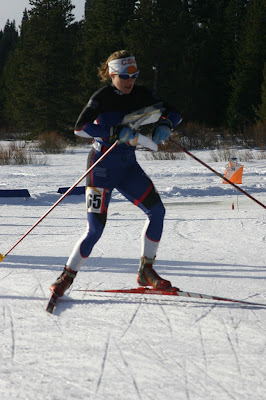 Ack! Need to change maps! Photo courtesy of Eddie Bergeron.
The second loop went pretty well, too, although I made a few 15-20s errors and hesitations. A group of girls got past me on the climb (of course we had another climb! Duh), and there was just nothing to do but let them go. I felt like I was just walking. So frustrating! But then, we went downhill again, and I started having fun again. This time I came through the map exchange in 6th place, just behind a Finnish girl, pretty cool! 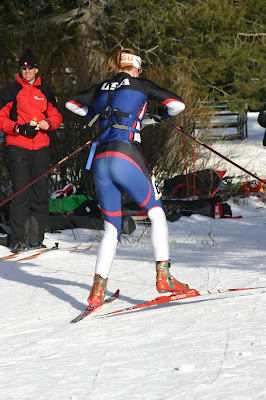 Attempting to get the map into the map holder. Photo courtesy of Eddie Bergeron.
The third loop was the longest, and sent us way down into Euer valley. I probably coasted a little too much down the hill, as there was a pack of 3-4 girls closing on me near the bottom. I managed to put a little time on them double poling the small trails on the flats, but all that did was show them where to go. At this point I was catching glimpses of Ali, maybe 1-2 minutes ahead of me, when she'd do an out-and-back, and one glimpse of the eventual winner. Things were going well down in that valley, but unfortunately, well, what goes down, must come up. I guess that works against me as well as for. As soon as we started climbing, it was like I dropped an anchor - the Finn just ahead of me was GONE, and Norway, Switzerland, Russia, and Lithuania caught me up. To add insult to injury, I skied into a groomer rut as I was reading my map, and cracked the tip of my ski. Great, broken equipment.
By the time I finally wheezed my way to the top of the hill, having decided that those other teams MUST have spent a week at altitude already, I could still see Lithuania, but the others were gone. And of course, when your legs are using all the oxygen, there's none for your brain. Two large mistakes on the last loop, one of which cost over a minute, and another pack of girls had caught me up. Panic time!
I managed to spike the last three controls, but the other girls were hot on my tail; really I was just showing them where to go. Because we were on narrow trails, they couldn't pass me, but I was worried about defending my position when we got to the finish straight. I went to slow to punch the "go" control, and slid over some bare ice, missing the punch. I had to turn around and backtrack to punch, and one of the girls punched and got ahead. I was moving faster in the sprint; a couple more meters and I could have gotten her, but it was too short, my mistake too costly. She got 10th, and I was 11th, so much for the top 10. Actually, thanks to the strength and depth of the field, I had my best World Ranking points ever from that race. So, many positives to take away, but I wish I hadn't felt quite so crappy coming up every hill.
Results. 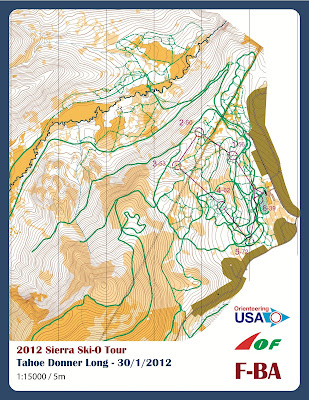 Map 1 from the race. 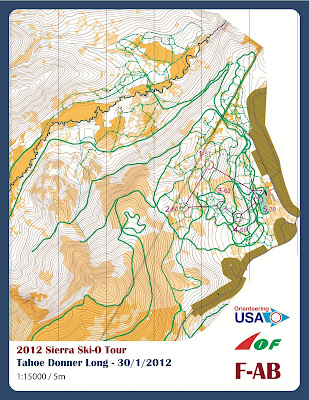 Map 2 from the race. 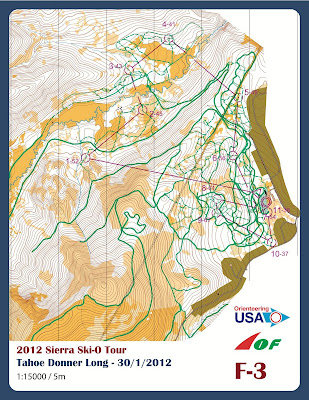 Map 3 from the race.
This cold will pass, and I get an easy day tomorrow, so hopefully the altitude will seem less brutal to me by Wednesday. Tomorrow is the North American championships middle distance, but I plan to treat it as a recovery/training day, so I can be rested for the World Cup sprint race on Wednesday!
I need to mention - Ali ended up in 4th place! Super cool, and so close to that podium!
Posted by Alex at 11:25 PM