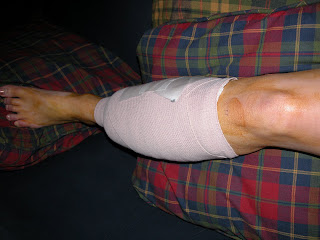 Yup, I had them cut open my shin. You can still see the iodine all over my leg. I can already kind of hobble around my apartment, so I bet I'll be walking around soon... it doesn't hurt too badly, but I bet thats just the painkillers talking.

Compartment syndrome, in case you don't know, is more common to runners than skiers, but skiers get it sometimes in the anterior something-or-other when they skate. Kris Freeman, Sarah Renner, Haley Johnson, Alison Flint, Ezra Hark (a mix of famous and less famous skiers) have all had it, and now they're all fast, except Ezra. (Sorry Ezra). What happens is that the muscle in a certain compartment, usually lower leg somewhere, tries to swell up bigger than the faschia that holds it in. This causes lots of pain and you stop skiing fast. To release the pressure they just cut open the faschia, and poof, you're better. In my leg, they found a slight defect in the faschia which had caused the pain I was feeling all winter in every skate race, because it was like a hole that the muscle was trying to push through. So, they just made the hole a lot bigger, and now hopefully the muscle will relax. I hear that this is often a very successful procedure, but I'll know for sure when I start rollerskiing again.

So for now I am just sitting on the couch, eating blueberry muffins (even crutches won't keep me from baking!) and drinking water. I still feel dehydrated. They tell you not to eat or drink anything after midnight the day before your surgery. That meant no water for like 12 hours, and MAN was I thirsty when I got out of there. Of course, it being free cone day at Ben and Jerry's, the first stop was free ice cream. Priorities, priorities :).

(Sorry for the inane drivel, I am on intense painkillers and I've been sitting on my couch with my damn leg elevated for a day and a half... this causes a little verbal diarrhea).
Posted by Alex at 12:08 PM

Wow I remember you saying you had compartment syndrome this winter. It's good that you're getting it taken care of, but I'm sure it's gotta be tough just sitting around now. Get better soon! I'm gonna need a roomie for Nationals this year, so you better be in shape!!!

hey - i am scheduled to have the same surgery soon, would love to chat with you about your experience. let me know if you mind. ryan

hey ryan, shoot me an email at acjospe at gmail.com

I was just curious as to how your fasciotomy is holding up?

I had a fasciotomy in two legs about 9 years ago. One of them held just fine, but the my right leg was significantly worse than the left and the fasciotomy didn't do the trick. The right leg had a muscle herniation right through the fascia every time I would exercise at all (including walking). I ended having a compartment release on the right leg only with skin grafting. That seems to have done the trick, although for several years I suffered from severe night cramps. Anyway, just curious about your experience and how it's doing now. I've successfully dealt with the night cramping with massage therapy and yoga. :-)

it has been a year since my surgery (i did both legs). i have had no issues waht so ever. the recovery time was shorter than expected and the pressure that used to build up has not returned. overall, quite pleased with everything. the PT after wards was worth the initial discomfort and i am sure aided my recevery greatly.

I was a 23 on the compartment pressure test and was told that at 30 they do the surgery. The doctors believe that I have a herniation in my lower leg, meaning basically that i have compartment syndrome but it is concentrated to one specific are (right above my ankle). I am a college runner and have been injured for 11 months with this! They told me that I could get the surgery for compartment syndrome, but because this is more specific, they aren't as sure that it will fix the problem. I just want to run competitively again. What do you think I should do?

Anon - I am not a doctor, so I really can't recommend a course of action - have you tried seeing a different doctor to get a second opinion? I suppose the good news is that you know what is going on with your leg. Good luck with getting it fixed and getting back into running!

Jenny, I don't know if I ever answered you the first time - my fasciotomy seems to be holding up great for the shin, although I am worried that I have compartment syndrome in my lower calf of that same leg - currently trying to treat it with massage and stretching, and so far, so good, but we'll see what the winter brings (skiing on snow is what really set off the pressure last time).