I pulled a well-worn move and volunteered Ed to help me park cars at the Ice Weasels race Saturday - its a good thing he was around, because he carefully placed cars in a parking lot that was a little bit on the small side, and if I'd been in charge I would have run out of room really quickly. I think we only made one or two enemies making people park on the cornfield... sorry, dudes, had to get there at 8:30 for the premium spots.

Once we'd gotten most people crammed into the cornfield, we wandered around poaching frozen kale from the course. I should mention, this is an actual farm they run the race on, some relative of Thom's owns it, and it pretty cool that they let us ride bikes all over it. It was pretty snowy out, I wanted to go to the start line on a pair of skis, but I was informed that that wasn't going to fly with the USAC officials. Damn. 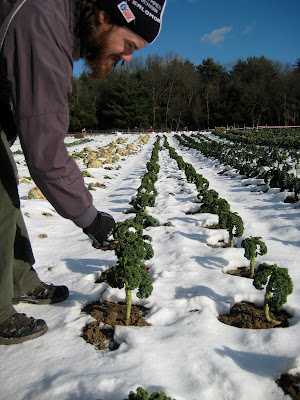 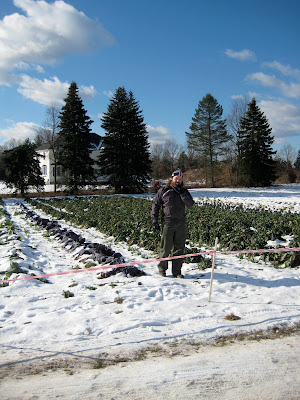 The women's field wasn't huge, but it was big enough to be respectable, which is all we ask for, really. I'd preridden a couple laps, and I knew it would be slippery, so the goal was to just stay upright. I should mention, I'm in ski-season-mode now, I did NOT need to get hurt because I was riding my bike in circles in the snow and I fell over. Having not been on a bike since Canton, both my handling and my legs left a lot to be desired, rolling vs gliding, its not as similar as you might think. The course was super hard to pass on, since there was one line that the cat 4 men had graciously packed down for everyone else, and everything else was like a huge, neverending sandpit of loose, deep snow. Which is fine, I like sandpits, and I like them even more when they don't put sand in my drivetrain, but no matter how well you ride in the sand, its still slower than riding hard-packed mud. So, passing was sketchy at best.

Since I registered day-of, I was in the back (third) row. Luckily, moving up was easy enough thanks to a couple people falling down on the first corner, and I found myself in third. Karen Potter was gapping us fast, I had a brief moment where I thought that maybe if I were on her wheel, I could ride that fast, but it became quickly apparent that first I'd have to close the gap, and that wasn't happening. I got myself into second in one of the few places where I felt safe to pass, on the uphill after the double barriers, and by the end of lap 3 (4?), Frances Morrison had caught up. She was definitely faster on the few straight bits, and trying to stay in front coming into the barriers (and the twisty bit where I was better than her) I came into a corner too hot and laid it out in front of the crowd. RIGHT. on. my. roadrash. Ouch. 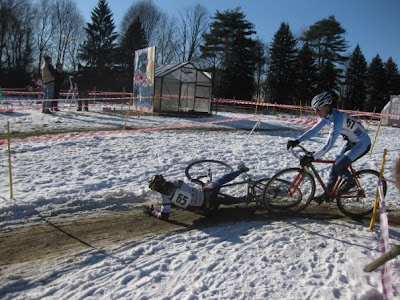 I'd actually gone down just a minute or two before, on the same side, so after that I knew I had to back off and just stay upright. Luckily, we were lapping people already, so I closed the gap once or twice, but I just had neither the desire nor the legs to stay on her wheel going through the start area with three to go, and that was the last I saw of her. 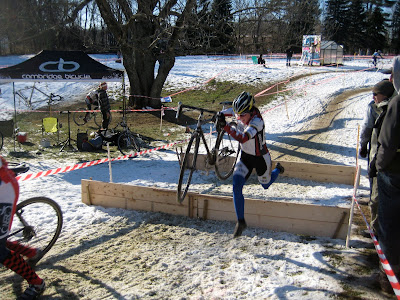 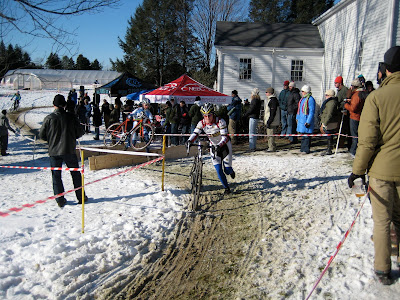 Anyway, I backed of a little, not too much, but just enough that I wasn't seeing cross-eyed, and that helped with the whole "staying upright" bit. I was having a ton of fun out there, and I'm super sorry to the girl in black on the mtb who fumbled when I lapped you - I didn't mean for that to happen, but thats sort of part of the game, you know? Didn't have to swear at me. 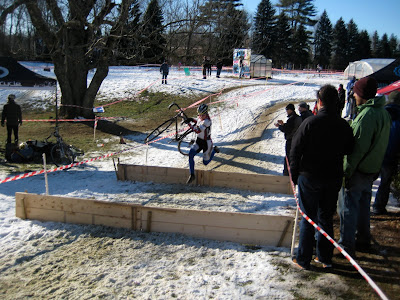 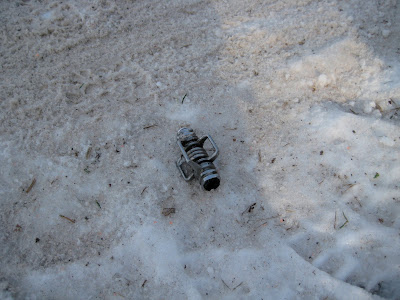 We saw this gem on the course after the 4 men had raced... thats gonna make it hard to pedal your bicycle.

We stuck around for most of the elite men's race, mostly just so I could collect the prize money, Ed was getting really cold just standing around all day and they had run out of beer by 1pm (which was highly upsetting, as it meant I didn't get any, since I was waiting until after my race. Next year, guys, don't tap the keg until noon, k?). Things were getting pretty awesome during the guys' race, with the kids going crazy with cupcake and dollar feeds. Where were they during the women's race, huh? Sort of annoys me that we obviously aren't cool enough for cupcake feeds. But whatever. The atmosphere during that last race of the day was great, that is what cx racing is all about. I may be a skier, but I'm going to miss cross season now that its over. 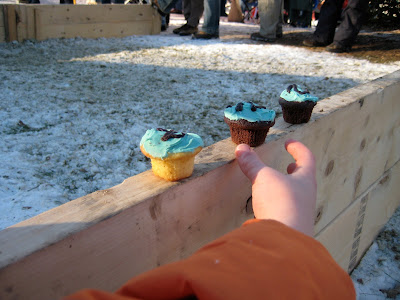 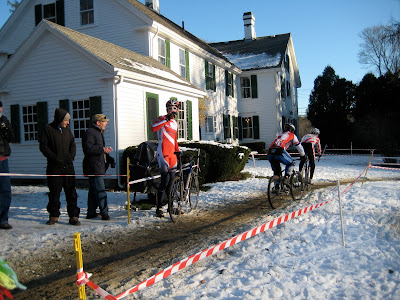 One of my favorite moments was the guy who picked up the dollar from the barriers, stopped to try and stuff it in his shorts, and the next guy comes by and steals the money from him. Lost the place AND the cash! Should have stopped for a beer feed instead, Kevin was supplying Ryan Kelly with one each lap. 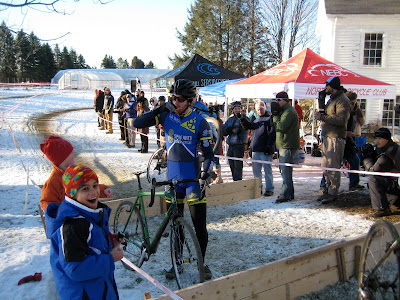 The kids were LOVING this guy, although he must have been so full of cupcakes by the end of the race that he couldn't move, I swear he took one each lap.
Posted by Alex at 9:45 PM

Next year, guys, don't tap the keg until noon, k

Totally with you on the non-Title-9-ness of the feeds for the women. Given that it was my SECOND race, and I was OTB, I was looking EVERYWHERE for a beer feed. And there was definitely no cash :(.

BTW - that last pic is Ryan. He showed at our house for an MTB ride the next day, and ate a few more cupcakes ;)

I fear my injury and fellow hupper mike's dislocated digit tied up our feeders! We'll get Rob to unleash his kids and I'll bring mine as well -- it will be off the hook I promise!