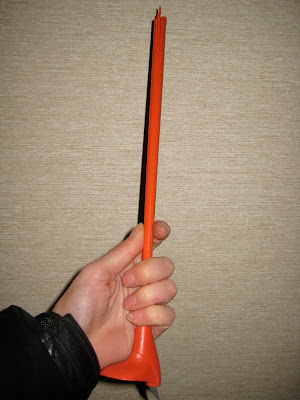 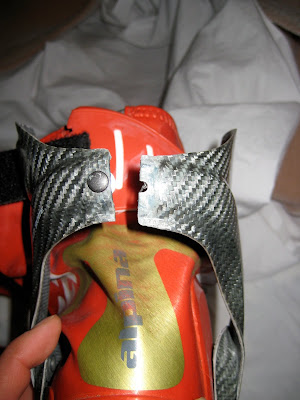 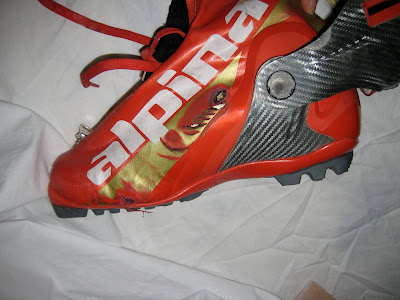 Saturday didn't go so well for me. I broke a lot of shit. Although that torn up boot was from rollerskiing, not ski racing.

Sunday I was hoping things would go a little better. I took the J1s to tour the course, since I hadn't seen it yet, and it was just as I remembered - awesome. Gradual uphills with a couple switchbacks, and twisty downhills, but I really didn't like the start area - a two minute uphill leading into 2k of downhill. I figured I could start hard since there were 2k of downhill after the start, but I miscalculated my warmup and didn't do a hard enough one. This meant that the start felt really hard, and I naturally didn't recover much on the twisty downhill. I was in third position for a while, but I knew I'd started too hard - my lower legs were just brimming with lactic acid, and I had no choice but to go into damage control and begin the packslide. I slid back from the lead pack, and damage control was done by the time a chase pack had formed, including myself, two middlebury girls, a GMVS girl, and Lauren Jacobs (Craftsbury Green Team). There might have been more people strung out behind us, but coming through the lap, I was feeling in control enough again to push the pace a bit.

Going into the second lap I was trying to keep my form together, but I was pretty redlined - this course felt like there was zero rest, except for those twisty downhills, which are somewhat restful, unless your lower legs are all cramped up, then they become a bit stressful. Anyway, I managed to not get dropped by the J1 from GMVS until we were nearing the top of the course, and I just couldn't go that fast anymore. A gap opened, and I couldn't close it. There was a Stratton girl ahead of me as we started the climb to the stadium, and I thought I could get her, although there was a fairly serious gap to close. I started double poling as hard as I could, not quite sure I'd make it, as we started that loop around the stadium. One last hill, and I could see Izzy striding ahead of me, this was going to be a lot of work. Luckily, I'm bigger and stronger, and my double pole was going a lot faster than her striding in the finish chute - I ended up beating her out by 1.4 seconds, which was enough for 12th. 5 seconds back from that chase pack, and about two minutes behind Sophie Caldwell, who won comfortably over her sister. It was a good race, but as always, there are the what-ifs. What if I hadn't started so fast? What if I'd done a harder warmup? Would the outcome have been the same?

Anyway, I feel good about these races, and I feel like I'm set up well going into nationals. We'll see what happens... 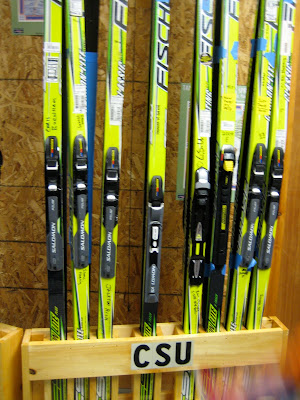 Part of our plan for world domination involves a sweet ski rack and a whole bunch of fischers (what?). My peltonens served me well, I beat a bunch of people on fischers, so there! 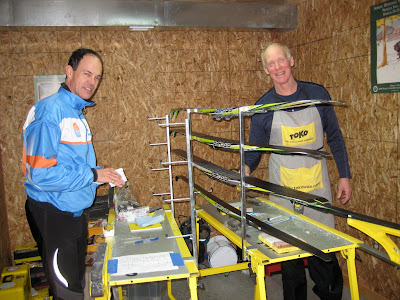 The two guys in charge of this CSU-world-domination thing.
Posted by Alex at 5:30 PM