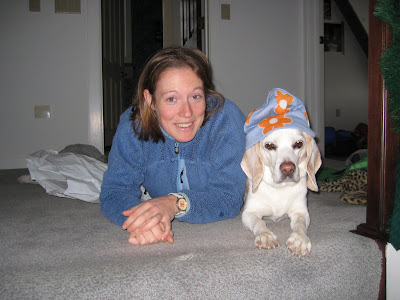 Air travel is not taken lightly when you’ve got eight pair of skis as a companion – like bikes, they are fragile, and the airlines like to charge an arm and a leg for that sort of thing. So, there’s sort of an art to packing up these flimsy boards so as to give them the most protection where they need it.

Although I don’t really notice much of a difference between the NIS plate bindings and regular bindings when skiing, the NIS plates win by a loooong stretch when it comes to traveling. It took a couple times to loosen them up enough to get them off easily, but now I can pop the bindings on and off in about 10 seconds a ski. This means that I can pack the skis flat on top of each other, and you can fit a helluva lot more skis into a bag than those with conventional bindings. Another bonus – if you pack the bindings in a small bag in the ski bag, it makes for easy access if your ski bag is too heavy and you have to take something out.

So, the packing process usually takes about 45 minutes, start to finish, but that’s mostly because I tend to get distracted (lets not talk about the travel waxing, pole cutting, basket switching, and other equipment-related shenanigans that were going on last night – to top it off, somebody never cleaned her classic skis after the last race, thank god it was a cold one!). It starts with a big ol’ pile of equipment, taking over most of the living room floor. After checking the weather forecast, I ended up deciding to leave the skate slush skis at home, since all the skate races are in the beginning of the week (when the weather is hopefully more accurate), and leaving the harries at home, since worst case scenario I can always turn my powder skis into harries… lets hope I didn’t just jinx myself. 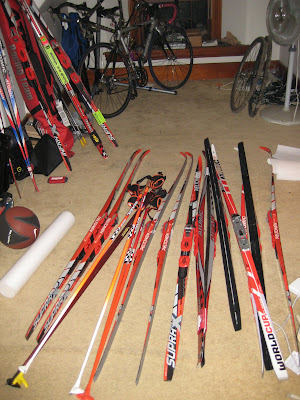 Yes, our living room has been completely taken over by skis, bikes, and other bits of exercise equipment. Welcome to my life.

Then the bindings come off, and the skis get taped together. So do the poles. Side story on poles… I broke a pole in Presque Isle (link), and so Alpina sent me a new shaft, in the form of this year’s poles. Little miss genius mis-measured the pole length, and cut them too sort – YES, I took the grips into account, I think it was just sloppy measuring. Anyway, they’re now about 1.5 inches too short, although given that I’ve been skating on poles that are slightly too long for the past nine years or so, now they’re a more appropriate length. But, I wasn’t about to fly to nationals expecting to race on a pair of poles shorter (or longer, for that matter) than what I was used to. So, I am bringing my old Swix Star poles, too, in case I don’t like how the shorter poles feel. Anyway, the other fun bit was being unable to find any cutting implements at home, and Ed and his truck are in VT with other possible cutting implements, and I knew he’d be upset if I used his good breadknife on carbon fiber. I eventually found a pack of sawzall blades, and you’d be surprised how hard it is to use a sawzall blade without the sawzall. Or maybe not. 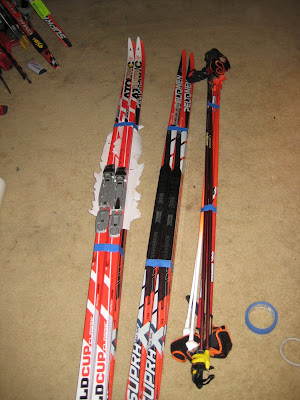 After taping the skis and poles into neat little bundles, I make a big ol’ pile o’ clothes on the floor, basically everything I’m going to need for the week. To Jess’ future chagrin, its almost all ski clothing, and there isn’t much by way of changes – but I hear there is laundry at the hotel. 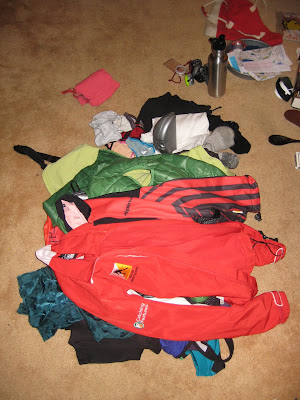 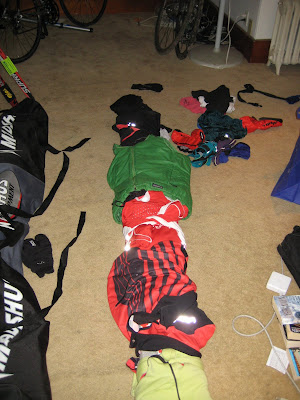 This was a small ski baby, it weighed in at 36lbs. Well under the limit...

Wrap up the skis with your clothes, paying special attention to the tips and tails. I tend to put a double layer of socks over the tails of my skis, and gloves over the tips, with some hats, and long sleeved shirts tie everything on there pretty well. I use pants to tie the whole bundle together, so that you end up with one bundle of skis, rather than a haphazard mishmash of easier-to-break equipment. Although, in all honesty, what is a pair of socks going to do against the abuses of the baggage handlers?
Posted by Alex at 11:20 PM

Do you pay extra to check this? Is it considered oversize? Can you email a link to this post in like 6 weeks to remind me before the Birkie? Good luck today!

The fee depends on the airline - Most of the ones I have been flying are not charging for ski bags (although some do say you can only have one pair of skis inside, but I've never been called out on that). It is oversize, but if you keep it under the weight limit, you should be good to go.

I flew Delta and Northwest to get to AK, and they don't charge for skibags anymore (last year they were saying $175 each way, which led me to shipping the skis out here instead), beyond the $15 baggage fee.