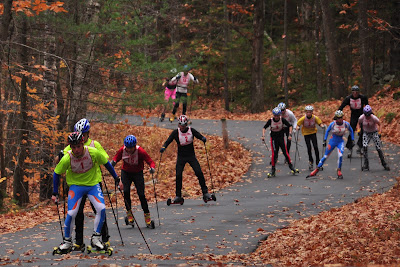 Kearsarge mountain, in Warner NH, has a paved road to the top that was recently re-paved, and naturally the head honchos in CSU thought that was the perfect excuse to hold a rollerski race to the top. John and Sue LaChance did the organizing (and leaf blowing, in John's case), and about 15 people showed up on Halloween to race 6km and 440m up a mountain. Fun!

I had plans to dress up, but just wasn't on top of my game enough to make it happen, so dressed up as a CSU skier. Creative. Rob was in his Elvis costume, but I guess everyone else felt like being a rollerskier is enough of a costume on its own. After some warming up, we lined up to start, the guys on fast skis in the front, the rest of us behind, and then it started snowing. Well, that might be generous, maybe it was just sleet. Appropriate. I was lined up in front of most of the juniors except for Hamish and Chris, and when John said "GO!", I tried not to get too excited. I'd seen the profile for this race, it started with a brutal uphill the first kilometer, no way was I going to toast myself on that. 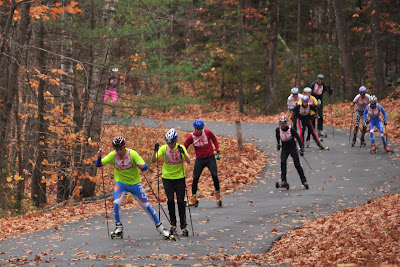 Hamish quickly took the lead, followed by Chris on his rocket-fast aeros. That was the last I saw of Hamish, but Chris faded hardcore and I almost caught him at the end. Yea pacing.

For the first few minutes, I was skiing basically next to Max and Rob, Max being one of those 70-lb 13yo kids, and Rob wearing an Elvis costume just made him faster. Eventually Rob left us, and I skied behind Max for a while - its probably not a good thing that my tempo matched his stride for stride. Time to get stronger... Anyway, he pulled away a bit near the top of the first steep pitch. The hardest part about this race was never having seen the course - I never knew what was coming around each corner, and it was psychologically exhausting to have no idea how much longer you'd have to put out this huge effort up the hill. I had guessed that it would be 30-40 minutes, so was pacing myself for that, but my watch was covered by my sleeve, so I really was just going by feel. I can tell if I'm going too hard and building lactic acid, and on a hill climb, you really want to avoid that. No surges.

After the first flat bit, which lasted for a depressingly short amount of time, the road angled back up, and Cate (one of my star J2s) caught up to me. She quickly passed me and dumped me like a bag of rocks, I figured that would be the last I saw of her. I couldn't tell if I was fading or she had started slower, I still felt pretty in control. 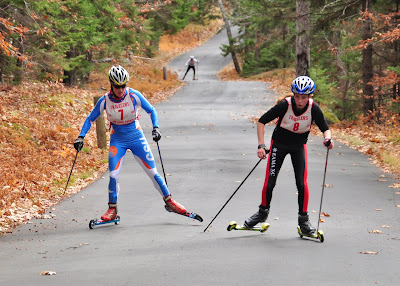 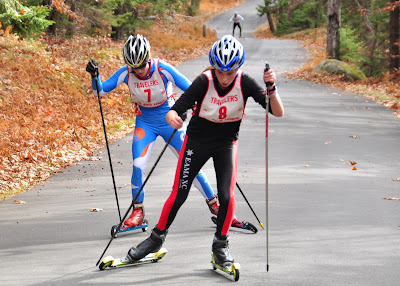 And leaves me behind. 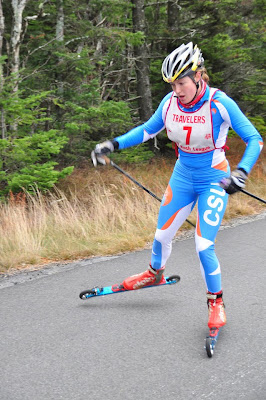 Something I've been working on the past couple years is how to be faster on gradual uphills - that work paid off as the hill became slightly less brutal, and more gradual, allowing for some glide. I closed the gap to Cate, and narrowed some of the distance to John and his kid Max. Part of the reason for this was because the road was turning a lot, and I was taking the shortest line, while they weren't. Amazing how much a second saved actually closes a gap. But then it got steep again, and they dropped me and Max. Going over a couple rollers, I worked those corners for all I was worth, and dropped Max. I'm not a fast skier because of the uphills... 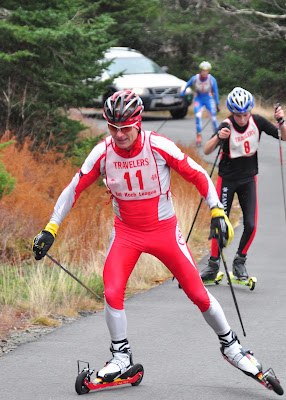 John, leading Cate, and Anne Burnham in the follow car. Jamie, Allen, Anne, and a couple others were leap frogging the racers to take photos and video - all of these photos are from Jamie. Tom and Sue (and others) were the timing crew, waiting at the top.

After the rollers, I had a sort of second wind, but I was starting to feel the effort. My left calf and shin were super tight, sort of like they get at the Weston Tuesday night races, and that made it hard to hold a good body position. As your legs crap out, you start standing up, and that is not fast. But there were a couple switchbacks left, and then I could hear someone cheering, that must be the top! Finally knowing that I was approaching the finish was a huge psychological boost, it is just so disheartening to ski uphill for half an hour and have no idea how much longer you have to keep skiing! 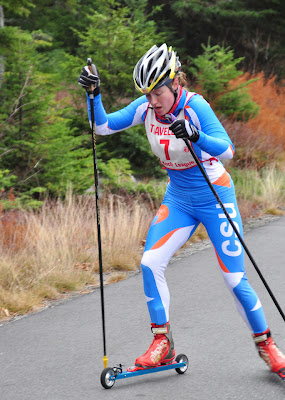 I was unable to close the gap, and ended up 10s down on Cate, and like 30s behind John. He actually beat us by considerably more than that, since he had started everyone, and then put on his stuff and chased us down. But I placed second for the girls, I think 8th overall, and I was quite pleased with my effort. For not training much recently, I felt pretty good, so, I'll take it. And next time, I'll know what the course looks like, so hopefully can put out even more effort.
Posted by Alex at 10:50 AM