I signed up for this race early, despite it mostly being a grass crit in the past, I like the atmosphere at this one. Chris Smith, a master racer for NEBC, offered me a ride up north, and it turns out he's mostly a runner, does cx races for purely for entertainment. We got along well. It was super dusty, I could barely see the riders who weren't in the front group of the early races, that much dust was being kicked up. Its been dry, and as the day wore on, the grass got completely torn up, especially in the corners, which just turned to sand. Advantage: Alex. Pre-riding the course, I noticed that they'd added more stuff to give me an advantage (love it when that happens) - Just after the sharp left-hand corner, they'd added a horseshoe that went over a log and then through the woods over some roots, and more corners on the field section of the course. Still a ton of power sections, but I knew that going in to it, I was mentally prepared to hurt.

We had a pretty big field, as far as the elite women's field goes - 16 starters. I lined up 2nd row, not in any mood to have to fight for the hole shot, but in retrospect, it might have been smart to start harder. I was pretty caught in traffic for the first half of the lap on the corners in the field, losing time on each corner to the accordion effect, but unable to make any passes, just not in the mood to be sketchy. I guess I just didn't have my competitive hat on at the beginning. By the sand pit things had strung out a little bit, and I'd managed to get in front of a small group of 3-4 girls I'd been stuck behind. Due to my ninja sand skillz, I moved up some more, and had a nice wheel to follow up the pavement. Lap two involved chasing down the next pack - I was guessing we'd do six laps, and was metering out my effort with that in mind. It was so dusty out there, and I was breathing so heavily, I was a little worried I'd have some sort of respiratory problem at some point - I was already choking on my own phlegm.

By the end of lap 2 I'd passed that second little group, and I could see Karen Tripp up ahead of me. The lap cards confirmed my guess at six total laps, and I told myself I could rest a bit when I caught up to Karen. It took two laps of absolutely railing every corner I could find to close the gap, though, and I was in full-on fat-kid-with-asthma breathing mode by the time I finally made contact. I could also see Allison Snooks fading ahead of us, but I didn't think I could accelerate much more. I didn't want to leave it to a sprint, and kept pushing the pace trying to drop Karen, it took a couple tries by eventually I got the gap to stick, by railing the downhill with the minefield of pointy rocks and then riding the log more smoothly than her. I held her off to the line, but barely, I don't think I've worked that hard on a bike in a loooooonnnnnng time. Turns out I was only 17 seconds behind Allison, so I'm thinking that with a smarter/faster start, I might have been in it, but then of course, I might also have blown my top. In any event, it was a really well-run race, and I was pumped to be part of it.

Ended up 6th, just in the money. Results. 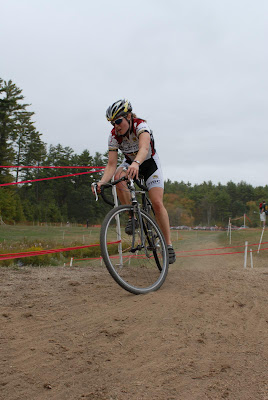 Photo credit Dave Holbrook: www.flicker.com/photos/ejcphotography
Posted by Alex at 9:01 AM