To make a long story short, I signed up ahead of time for Pat's Peak and then decided that was a bad idea at 11am Sunday morning. But you didn't come here for the short story.

Tuesday morning I woke up with a faintly sore throat, trained through it, and by Friday a small monster had crawled into my chest and was trying to claw its way out. I made the decision to go to the CSU orienteering training camp anyway, figuring if I just kept everything at or below level 1, I'd be ok. I was sort of assuming that I would be recovered enough to race Sunday afternoon at Pat's Peak, because really, what chest cold takes longer than 18 hours to go away? 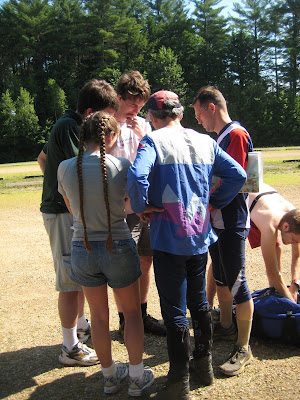 The group huddles to figure out who is going to hang flags where.

We got to Pawtuckaway Saturday morning, and set out some streamers to act as controls. I have had some miserable past experiences at Pawtuckaway, but as always, time dulls the sharp edges of the worst memories, so I was excited to go run in the woods. Since injuring my knee, I haven't run much, and I wanted to see how far I could push it. Our first exercise was a control picking course that Brendan had designed, with lots of directional changes and lots of controls, relatively close together. The idea was to always know where you are and carry good flow through the course. I thought this worked well, and the bugs weren't quite as annoying as I remembered. It was only near the end that the fact that it was 1pm and I hadn't eaten since breakfast and was getting far too dehydrated caught up to me, and I started to make some bobbles. Getting back to the cars I bee-lined it to the beach, and life was a lot better after that (and some lunch).

The afternoon's activity was a route planning course, designed by Ross. Basically, we sat down with a partner before running, and discussed the routes we were planning on taking, and then tried to follow them exactly. The bugs were starting to wake up as I plodded through the woods, or maybe I was just moving more slowly than I had been that morning, because I was spending a lot more time in deep conversations with the deerflies about how they could be having a better life if they were chasing something like a deer, because I was just going to swat them when they landed on my forearms. Anyway, I made it through the course with fairly good concentration and actually on the routes I'd planned, which is saying something at Pawtuckaway because the map is just so technical that its easy to get turned around or off course. It probably helped that I couldn't really move fast, since breathing hard aggravated the monster living in my chest, so I was going slow enough to really pick off the features. 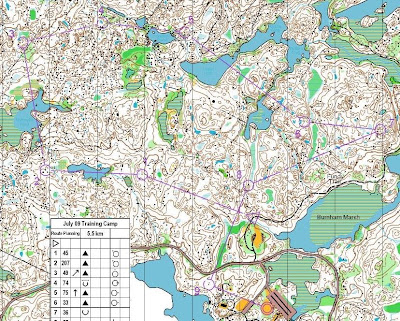 At this point, we all headed to the beach, before finding our camping sites and then hitting up the grocery store for ingredients for some beer-cheddar-broccoli risotto. Yum. Of course, by the time we'd finished dinner, it was 10pm and starting to rain, so plans for the night-o were scrapped in favor of bed. 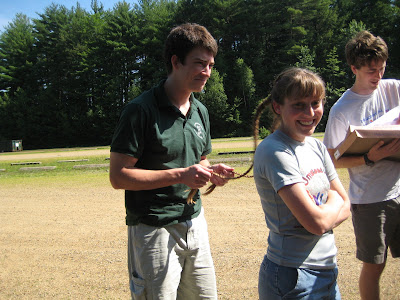 Sunday morning the rain had stopped and it was sunny again, and I was thinking that the bike race was sounding like a great idea. Until I tried running, and discovered that if I raised my heart rate higher than 160, rattling noises came out of my chest, and I was still coughing up great green globs of goo. I thought about just showing up and riding, but then I remembered that Pat's Peak is at a ski resort, and even just riding around was going to cause those rattling noises to come out of my chest and make it hurt. So, I bailed on the race. Which leaves me feeling really guilty, like I dropped out of a race, even though I didn't even start the race, so how could I have dropped out?

I assuaged my guilt with another three hours in the woods, and the bugs were out for real now. The first nine controls or so went pretty well, I was focused and moving a lot more smoothly in the terrain than I had been yesterday. Then I sort of let my attention wander on the way to 10, and blew about 20 minutes (which is huge, when you're normally talking about mistakes in the 15-40 second duration) sort of trudging in circles, completely unable to relocate. I was definitely at the talking-to-myself point when I finally relocated enough that I could figure out how to get back, and bailed on the rest of the course to just finish it up as a long OD. Three hours was enough, thank you... 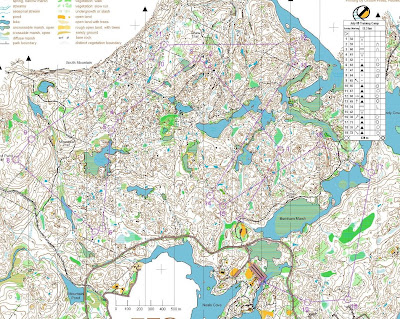 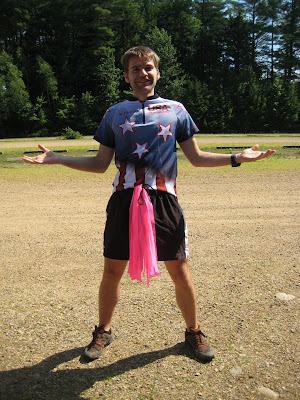 Ross found a great way to carry streamers. Sort of.

Anyway, now its project get healthy. I'm coaching the ski camp starting wednesday and that is going to feel a lot better if I can breathe. Although it is sort of nice being unable to fully appreciate the stink coming from those dirty clothes I've been wearing all weekend...
Posted by Alex at 10:17 PM

Sorry to hear about the cold, but I missed you on Sunday! The ENTIRE Expert Women's field was ME! At least I would have had some company if you had come ...

Don't trash your season in July...get healthy! But I did miss you at Pat's Peak- that course is awesome!