So, I'm not a huge Harry Potter fan - I mean, I've read all the books, and seen most (well, at least one) of the movies, but they all sort of run together in my head. However, in honor of the sixth (I think) movie coming out, Lori put on a Harry Potter-themed sprint at Hogwarts (Harvard), and I just had to check it out. Essentially, it was just a score-o - you get a map, and there are controls on the map, and each control is worth a different number of points. You are given a time limit and told to go collect as many points as possible. The twist to what would otherwise just be a campus score-o was that at some of the controls, there was a piece of map taped to the object that was the control (we don't hang flags for urban sprints, they'd get taken), and the piece of map showed two "mystery memory" controls. You had to memorize the location of these new controls and then go get them, and they might have more clues to further controls. Lori was running around changing the locations of these maps as we were running, just to make things even more confusing. Somehow it all tied in to Harry Potter, but that mostly went over my head since I'm not exactly up to date on those books.

By the time I left, Lori and Ian were trying to devise a way to do orienteering quiddich. It sounded way too complicated to me.

Anyway, having these little quirks to a normal score-o made the run really interesting. I never thought I would be so interested in zigging and zagging all over the Harvard campus, but I had a great time. I hope we do more runs like this in the future! Much more fun than battling mosquitos and briars and mud...

I'm out in Winchendon, now, for the first annual CSU ski camp. Our first day was today, and we have a neat split between rollerskiing newbies and experienced JO-bound kids, so its been easy to get people into groups. They all looked super tired after our rollerski technique session, but they wouldn't stop playing frisbee, so maybe we just need to work them harder... I'll check back in after a full day of torture! 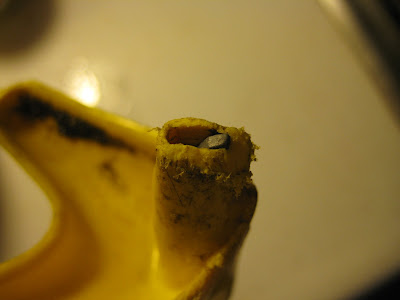 If you're a beast, like me, you can pound the pavement so hard that your carbide tip gets mashed into its plastic basket. Another case for using rollerski tips rather than snow tips... 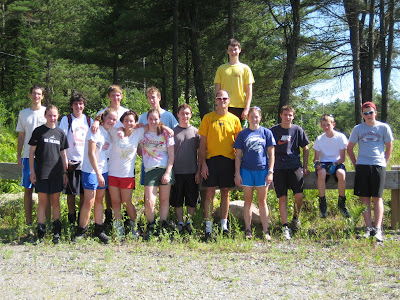 A post-rollerski group picture, minus Jamie, who is taking the shot. 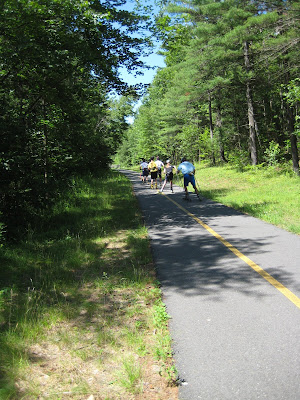 There is a beautifully paved bike path that runs about 5k towards Gardner, with a very slight uphill grade - perfect for traffic-free technique!
Posted by Alex at 9:20 PM