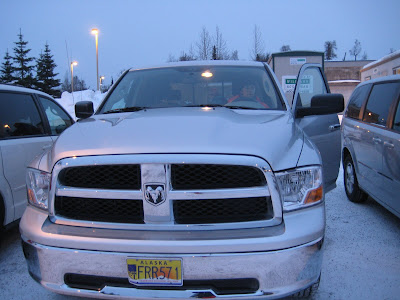 This is our new rig. The van got a flat, and the only thing they had that was big enough was a truck the size of Texas. Both Janice and I are getting a kick out of driving something this big.

This was a pretty good race for me - I have been doing better at skate races recently, so I had some high expectations that I was trying to tamp down - "you know what to do" is what I tell myself before a race to calm down. My brain doesn't have to overthink things, my body knows what to do and my brain knows the course well enough, there is no need to stress over it. That mantra generally worked pretty well, and I was relaxed on the line, telling myself to start conservatively. This course seems really hilly to me, and some of those little guys are quite steep, so I didn't want to start too fast and blow up. "Relaxed but not sloppy" were the words of my day.

They pulled the blanket off my shoulders at 30 to go, and I threaded my poles over the starting gate. The clock showed 5 seconds to go, 3 seconds to go and I was off! My Peltonens were fast, Janice had waved her magic wand over them and they felt like rockets now, and I V2ed right to the base of the first steep hill. That was when I was met with a surprise - despite the rock-hard warmup tracks, this hill was 6 inches deep in sugar slush. Just like Mt. Weston, I thought I'd escaped that crap by coming here! Trying to find the hardest packed line, I eventually made it up the hill, seeing a girl in yellow ahead of me who was on her second lap - time to start chasing! My skis ate up the downhills like the beasts they are, and I had closed the gap by the time we crossed the road. She was skiing pretty well for her second lap, and on the hill past the biathlon range she got a split that she was in 38th. So this is how fast I have to ski on my second lap to be 38th... I passed her on one of the few V2able sections, and thanks to my quick skis, I had a small gap by the time we passed the icebox and started climbing the big hill.

Coming up the steep turn on the hill, I saw a pack ahead of me - mostly people on their second laps, but my 30-second girl was just ahead of them. I tried to stay pretty light on my feet around that corner, it was deep sugar slush, but not as bad as that first hill, but I could feel myself bogging down anyway. We hit the flatter hill and the Michigan Tech girl came around me and just took off - I didn't think I could go that fast without blowing up, so I let her go. By the bottom of the downhill (which had some nice recovery, I liked that part), I'd caught up to the back of the little pack, which was breaking up. First up were two other Michigan Tech girls, and then a UAA skier, who stuck with me up to the top of the hill, although I put a gap on by the bottom. It feels so good to pass people, and its so much fun to have other people out there to interact with.

Coming into the stadium, I finally caught my 30-second girl. I was feeling pretty good at this point - definitely like I'd worked hard, but not all that close to blowing up. I got in front of my 30-second girl before the steep little hill on the sprint course, and then just tried to stay relaxed and comfortable up the hill - it was already deeper than the first lap. My skis put a gap on her coming back down, but on the hill by the biathlon range her coach shouted to her that she was tied with her sister, and that she could track people. She took off, and I did my best to stay with her. We got out of sight of her coach, and she slowed down again. Ahha, I understand that move! I took the lead again, opening up a gap on the downhills, enough of one that she didn't close it until after the steep little turn up the big hill. She was clearly a better climber, but I was doing what I could to make my fast skis work for me and work the transitions, so when she passed me on the more gradual part of the climb, I stuck with her, wheezing my way along. Did I mention I think this is a hard course? My left shin was starting to feel really cramped up at this point, so I just made even more of an effort to be relaxed - not easy when you're yanking your ski tips out of deep sugar slush.

I took back the lead after the last real uphill, and kept it, although she was hot on my heels up the last bit of hill, but I wasn't going to cede the best line around the corner and it was too much extra distance for her to go around, thankfully she didn't track me. I got a nice gap from the downhills into the stadium, and then just started hammering as much as I could - my finish stretch split was the 21st-fastest, which is kind of cool. Definitely a hard race, and not my favorite types of conditions, but it was a good one, and I thought I played it well. I was probably helped more than I realize by my 30-second girl being a stronger climber, because she made me climb out of my comfort zone. The end result was 52nd, 7 seconds out of that top-fifty goal. If only it had been harder packed conditions I might have been able to push harder because my shin wouldn't have been hurting, but I thought I did well to stay relaxed, but not sloppy. Good race, and I hope I have another good one in me for Wednesday's classic!

Full results are here - I did pretty well compared to some of the usual eastern girls, although maybe they just had bad races.

Today, we'll test some skis and waxes, and then Jess and I are headed out for a drive along Turnagain arm, just to see more of Alaska than the tourist shops downtown and Kincaid park. 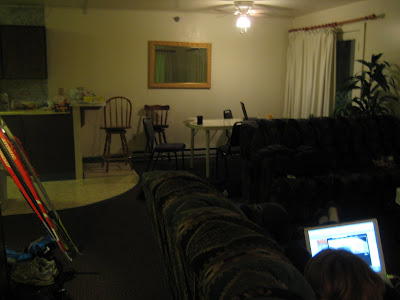 This is our place. Pretty roomy! (there are two bedrooms off the hallway that aren't pictured.
Posted by Alex at 11:41 AM