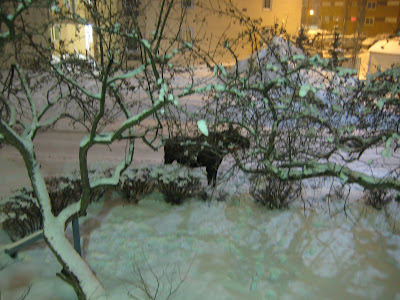 We woke up to fresh snow and a moose eating the bushes outside of our hotel balcony. I guess he wasn't that big as far as mooses go, but I thought he was a big dude. 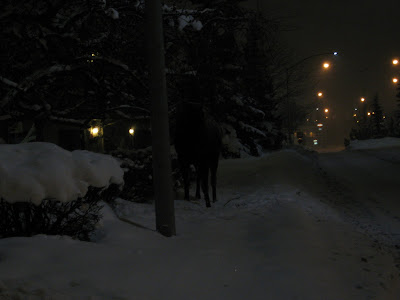 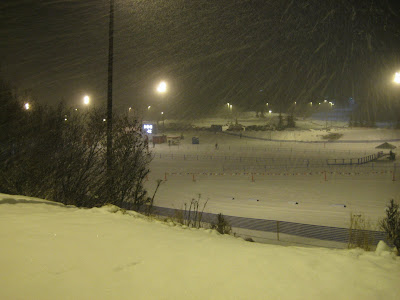 The venue looked like this, just below freezing and snowing buckets. God knows the place needs some new snow, but I deliberately left my hairies at home, so I was a wee bit nervous.

The 20k classic race today was pretty tough - the courses here have a lot of hills, and not much double poling, which is my forte. It started snowing around 6am, and by the time I finished my race there were six inches of new snow! I really liked our wax, given the conditions - not perfect, but darn good. It was a little bit grabby on the first two laps, but my skis are stiff enough that my glide was excellent - I love catching up to people on the downhills!

The field was a little smaller than usual, because the juniors were taken out of the race to do a 5km - I had a ghost in front of me in the starting grid, so I got off to an excellent start, which in this field, is not necessarily a good thing for me. I didn't WANT to be going that fast once we started climbing! I let myself slide backwards for a while, until I found a pace that was more comfortable, but the deep snow made the herringbone parts pretty hard. The three laps were difficult mentally, and on the first lap I found myself in a very negative slump - thinking about how I was just slogging around through the deep snow, with skis that were grabbing, and everyone was passing me. Of course once you start thinking that, it comes true, but finally I snapped out of it, by telling myself over and over "I love hills!" My brain is pretty dumb, so it believed me, and I started having a lot more fun by the time I got through the second lap. The course was speeding up, despite the snow, which meant that my skis were just about perfect now - fast on the downhills, and just the right amount of kick on the uphills. I was also constantly telling myself to stand up, because I find that when I get tired, I tend to hunch over, and then I can't kick as well, so this was a good mantra to keep my core involved and my kick working.

By the time I finished the third lap, I was super glad to see the finish. I'd been trading back and forth with a couple different girls, right in that 38-45th place group, and despite feeling a little more positive about ski racing and life in general, I wasn't feeling all that competitive, and couldn't seem to kick myself into gear. I thought I'd be able to catch the University of Utah girl, since she was skiing much the same as me - double pole like hell, and then walk/jog (definitely not run) herringbone the uphills. I tried not to walk when people could see me, but herringboning was causing sharp pains in my ankle, so it was an awkward motion for sure. Jess had passed me on the first lap, but she was fading on the third lap, and I thought I'd get her... I just didn't have enough real estate in the end, but I was closing fast! That was a long race, and the snow just soaked through every piece of my clothing, my hat was so wet that I could wring it out! Skiing in a heavy snow is always a good time... Anyway, not a great race, but it was fun to have it be a mass start - this was a definite character-building day!

The rest of these shots are from our rest day on Tuesday, I have no idea who could be wearing the husky mascot, but it was just sitting there in the lodge... We started skiing around 10:30am, pretty dark out, but at least we got to watch the sunrise again. 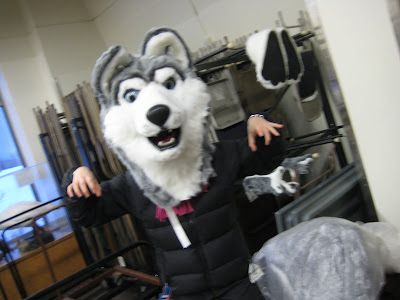 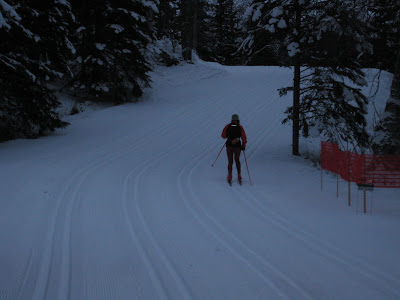 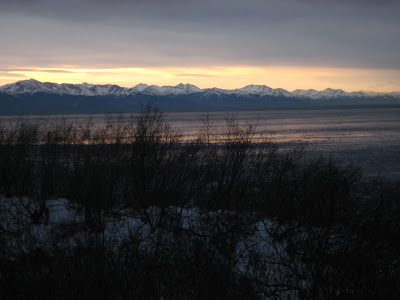 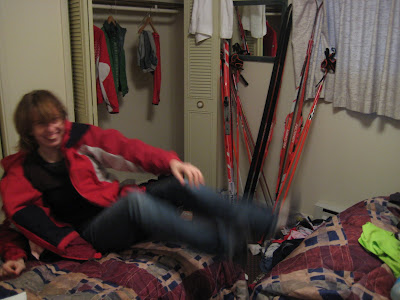