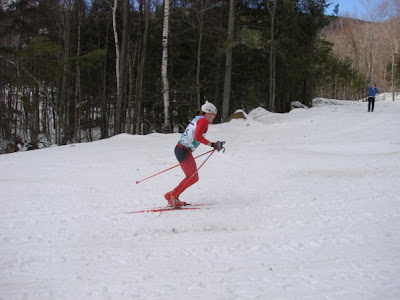 Chris Burnham photo. Proof that my ankles do bend, and I do know how to have a forward body position. yay! We can ignore the fact that it looks like I'm just running.

So, I was feeling pretty unsure about racing after I finished my cooldown on Saturday. I got back to the Reuter's house (staying with Colin's parents is definitely the highlight of the Rumford weekend - we had a four course dinner Saturday night!) and went for a jog, which just made me more depressed because my feet hurt from running around all day in ski boots. So then I stretched a lot, and took a contrast shower, and had an awesome dinner, and got my feet up for a while, and I decided that if this didn't recover me, it just wasn't gonna happen.

So, Sunday I drove over in time to see the J2s race, although I missed the boys' race because I was leading the J1 girls on a course tour. I think it was a pretty useful thing for them, we talked about how to tuck, and carrying momentum, and after one gradual, straight downhill, I asked, "was that faster? was it more fun?" and one of my girls turns to me and says "that was so scary!!" Ohhhh geez. Anyway, my girls looked pretty good on the downhills in the race, although the uphills for some of them were a different story. Its quite rewarding to watch people do what you tell them to do and have it make a difference. Go me!

My plan was to ski part of a warmup and then evaluate how I felt and whether or not I'd do the race. The cold felt like it was under control, but skiing up highschool hill the first time, I knew that there was no way I could make it up this thing twice, at race pace. Better to not push it today, it was superfan time. I missed the J2 boys, but I got to watch Corey go all superpower on highschool hill - she said she was totally tunnel-visioned by the top, I can believe it, that little chica was redefining what we mean by HAMMERING. She held off Heather Mooney by four seconds, those two girls are benefiting so much from having each other to race against. Impressive. The rest of my J2 girls did great, too, with Cate placing 8th in her first 5k and first EC, and Olivia in 11th in her first EC. Blake was just psyched to beat people, and really appreciative of my cheering on Highschool Hill.

The J1/OJ/open women were next, and I definitely felt some pangs of regret watching them whoosh by. If I felt good, I could totally be a contender in that race, but it would have been a miserable experience to race feeling the way I did on Sunday. Lauren rocked it to second place, representing for the washed-out seniors. Hannah, my first-year J1, clawed her way up to the lead group and snuck into fourth, with this huge grin on her face - there is nothing better than knowing you're having a good race while its happening. My other J1s, the ones who think the downhills were scary, skied mostly as a pack near the end of the race, but totally rocked those downhills.

At this point my voice was getting a little hoarse, I'd been screaming a bit much. 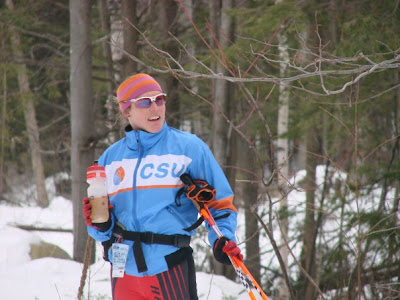 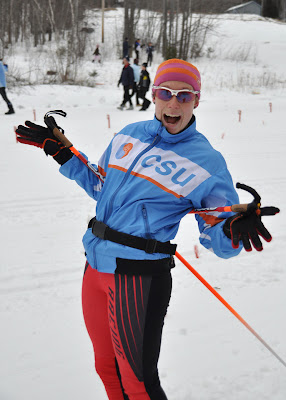 I was having a great time, though, its really fun to cheer for people who are doing well in their races.
In the J1/JO/open men's race, Kris Freeman was impressive, basically skiing tempo and dropping the field, but the prize for hardest breather goes either to his brother Justin or to Ryan Kelly, the Colby assistant coach - those guys were working harder than anyone else in the field. It was impressive. My boys skied well, especially some of the guys who normally finish a lot nearer to the back of the field, and my voice was shot by the time their race was done. Maybe I should cheer less intensely, but I don't know how. It was super fun being a spectator for a day, though, especially at a race where I knew so many of the racers.

Monday, being a holiday, meant I could go somewhere and ski my brains out, so I just followed Colin and Linnea to Bretton Woods, where Colin was racing, and Linnea and I trudged through the snow sort of breaking the trail for the race. It was far enough removed from racing (if you ignore the fact that we were on race skis, on a race course, with a herd of racers bearing down on us) that I had a great time. I needed that. My brain needs a break from racing, and my body does too. Hopefully I can continue with this streak of mature decisions about racing, although I'm sorely missing those Tuesday night fights...
Posted by Alex at 9:50 AM