A while back, I think around September or October, Anna Mcloon and I decided that we wanted to host an event at Weston that was run by women, for women. We were hoping to tap into the highschool-girl-potential and make them love skiing and become awesome racers, but as it turns out, we got all adults. Which is totally fine, and often much easier to teach, but next year, if we do this again, we'll probably hold two events - one for girls, and one for women. Anyway, we didn't really have any sort of plan for this, but I roped Sarah Holton and Linnea Koons into agreeing to be instructors. I managed to get our information up on Weston's website, and then we just sat around and did nothing for a few months.

As of Monday last week, we had less than 10 people signed up. Since we'd just lost an instructor (Linnea decided to do the Jackson 30k race on Saturday), we were down to three instructors, with 9 people, thats a pretty nice ratio. I sort of took it upon myself to do all the registration compilation stuff, and since last week was a wee bit busy, I just kept putting off compiling the registration stuff until Thursday night. And then I realized we had ~15 people signed up, which was still fine. And then Friday, we got 20 more registrations. I figured this out at 9pm, at which point, I was close to a panic - a lot of these women had never skied before, and its really hard to teach people how to ski when you have 10 people in a group. Some frantic phone calls and emails later and we'd convinced Erin Dubinski, an ex-CSU skier, to come down for the day, although she could only help in the afternoon. Phew!

We didn't have much of a lesson plan, but we had enough of one, and more importantly, Sarah has these ice-cream-making balls that you can ski around with - you put all the ingredients for ice cream into the ball, and ice and salt goes around the outside of where the ingredients go, and then you ski around (shake it) for 20 minutes and you get ice cream! Everyone there seemed to have a great time, and maybe even learn something. We had three lunchtime talks - Callie Gordon came and gave us a talk on nutrition for women, Anna did a waxing demo, and I gave a talk on sports psychology and what to wear while skiing. Then it was back outside. The sunny weather and warm temperatures helped, too, rain or snow would have been miserable. 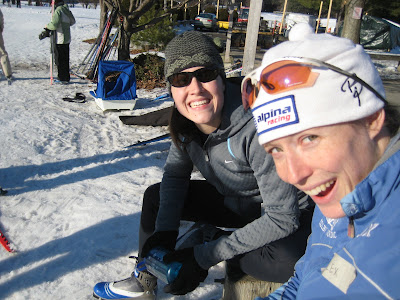 Callie and me soaking up the sun during a short break from the outside technique bits. 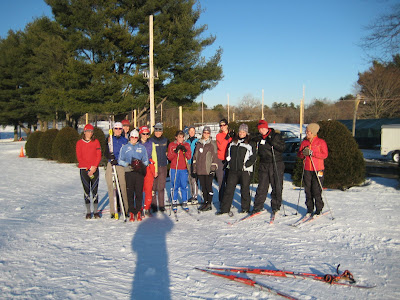 The group of us, minus a couple people (10?) who'd had to leave already. 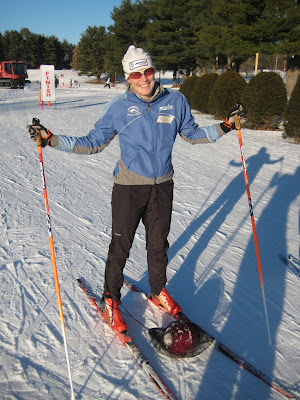 I'm getting the ice cream started - we hooked the bag's string around our ankles and skied around for 10 minutes to get it going. It was really obnoxious to ski with this thing around my foot, but we'd forgotten to bring any string to tie it around peoples' waists. 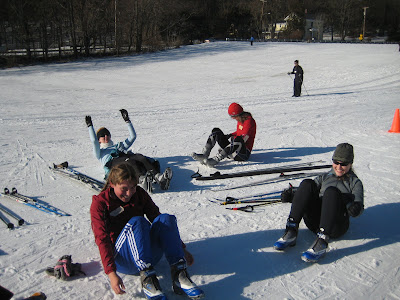 I was making people do crunches to learn how to properly do V2 alternate... they loved me for that one! 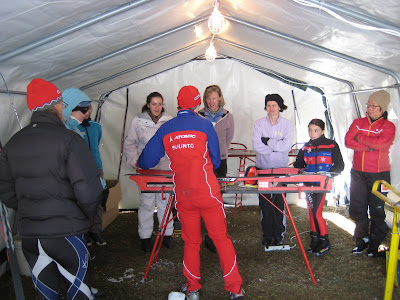 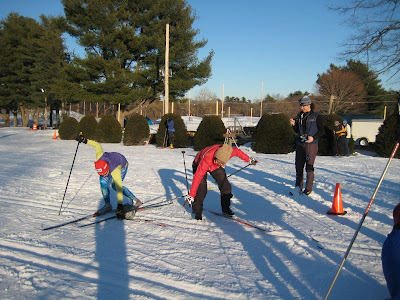 That was a super fun day. If a bit tiring. Big thanks to Sarah and Anna and Erin for helping out, and to all the women for participating!
Posted by Alex at 9:57 AM