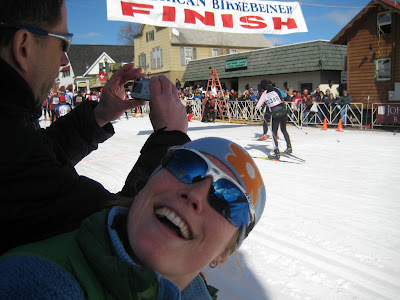 When I went to pick up my bib Friday, the guy handing it to me looks at the number and says "23 - you're a speedy one!" I'd been getting more and more jittery all day and that just did it, full-blown Birkie fever, I couldn't WAIT to race. Tapering does that to me, when I'm not blowing energy on workouts I become somewhat of a useless wreck - racing is definitely an addiction, I needed a hit, and that hit was a 50k with 10,000 of my closest new best friends. Lay off the coffee, kiddo...

Since Alpina wasn't at the demo this year, I was on my own for lodging, so I joined forces with the Colby boys (plus Colin) - Aaron Blazar, his girlfriend Lauren, Cary Fridrich, John Swain, and Nick Kline, with a guest appearance of Matt Briggs Saturday night. Cary and Colin were starting in wave 10, which meant they would start close to the time that the rest of us were finishing, so John, Nick, Blazar and I were in the early bus to the start, although I was a bit alarmed at how little time I had to warm up - I ended up doing jumping jacks in line for the porta potty because I wouldn't have time to warm up otherwise. For most marathons I don't worry much about the warmup, but my suicidal race strategy involved going out pretty hard, and the course starts climbing pretty soon, so going into this cold would have been bad. As it was, I could have used an extra ten minutes of jogging around, but I didn't get the fluttery heart feeling so its all good.

I got in the pen, ate a gel, and lined up behind someone who looked fast - I think it was Kristina Trygstaad. Off we went, and it was easier than I thought to slide into the top 10. Part A of the plan involved staying out of the wind as much as possible, which at times was tough as people jockeyed for position, but I'm pretty steady on my feet and it didn't really bother me. Just before the turn to the powerlines Tazlina Mannix took the lead moving a little faster, and as we started the climb I realized that my boots were too tight. Not like "I put the velcro strap on too tight" but "I can't feel my left foot or bend my left ankle" too tight. I tried to chalk it up to not enough of a warmup, and got ready to suffer until my body was warmed up, but those first hills sure didn't feel good. I was working hard, but to my relief it looked like everyone else was, too.

Eventually we stopped climbing, and through the rolling bits of the powerlines, I'd discovered that my skis were fast - maybe not the absolute fastest out there, but faster than maybe half the girls in the top 15. Nice. I'll take any advantage I can get. However, my left leg was in shear agony - it felt like compartment syndrome had felt, like my shin and calf were completely blowing up. I still couldn't bend that ankle, which kind of throws a wrench in your skate technique, requiring a much more upright stance, fine on the flats but definitely not fine on the hills. I popped from the lead pack around 6k, I knew I couldn't keep going at that pace, and I hoped an easier pace would help my leg. But the chase pack came and went, and I knew that if I didn't loosen my boot, this race was over, I'm no Petra Madjic, I can't go fast when part of me hurts that bad. I suffered through the climb at 7k, knowing that the longer I could stay dangling off the back of the chase pack, the more time I was putting on people behind me before I had to stop, but at 12k, that was it - off came the poles and gloves, and I took the 30-60 seconds to loosen my boot. It took a km or two, but once I had blood going to my foot again, life was way better.

Three girls had passed me during this operation, and as I started to chase, a Rossignol skier, Kim Rudd, caught up - she had started conservatively, but was skiing really smoothly, working the transitions, and she had good enough skis to hang with me on the downhills. We worked together without a word for ~6k, picking off two of the women who had passed me tying my boot before OO, and after that, realizing we were close to the same speed, we agreed to try and work together to catch that chase group. The course was flying by, we picked off another straggler or two, and it was fun to have someone to ski with who skis in a similar manner, working the transitions and using a lot of V2 on the gradual stuff, but we weren't catching that group - someone was at the front driving it hard.

Around 35k, I felt the first tremor of a spasm in my right tricep. That didn't take long. I switched to doing more V1 right, since that uses the left arm more, but my right leg was a little tired too. Just before Bitch hill, we picked up Paulette Niemi, whose skis couldn't keep up with the chase pack - she picked up the pace up Bitch hill, and I thought the race was over for me. But I worked the downhill hard, and made contact again. Kim and I were able to drop Paulette on some of the downhill rollers onto the lake, but I was pretty done at that point - my triceps were spasming badly, and if I did any V2 alternate, where your arms go straight because of the slower tempo, I'd get a full-on charlie horse, it wasn't fun. Kim asked if I could lead, and I panted out something to the effect of "I can try, but its all I can do to hold on right now", and so she kept pulling. A dick move, perhaps, but I was losing contact even in her draft.

A guy from wave 1 came through as we were halfway across the lake, not much faster than us, but fast enough that Kim got in his draft, and that was the end for me - I couldn't go any faster. Paulette caught up, and I managed to stay in her draft as we finally got off the lake. The corner onto Main st. was super slushy, sugar, but I was on the inside, and next to Paulette, which meant she was pushed towards the big statue thing with the oil tank and the burning torch, and had to change her line a bit to not run into either that or me - I realized I was pushing her that way and corrected, as we hit the harder snow, but she was as done as I was, and my "sprint" held her off - I could see Kim just ahead of me, maybe a second ahead, and I just couldn't move any faster. My body just would not respond. This was beyond tiredness, I've never felt this dead before - if I caught an edge and fell down, I'm not sure I would have gotten up. I was a mess, and couldn't close the gap to Kim, but at least I held off Paulette.

It was super fun to ski with people for that long, usually I end up in no-man's land somewhere, suffering alone with no idea where people were, but this race was different. I ended up 16th, which is a bummer because if I'd been able to beat Kim to the line I would have had that top 15, but at the same time, I'm happy with my place - aside from the boot incident, I skied well, I had good skis, and I had good legs too. Maybe someday I'll figure out how to race 50k without cramping, but until then, I'm happy with this one. Its a good note to end the season on. And most importantly, I crushed Cary, Colin, and Blazar, to the tune of 15 minutes. Swain and Kline are a little too close to still being legit racers for me to get, although I was only 6min off of Nick's time.

Full results, for the women. 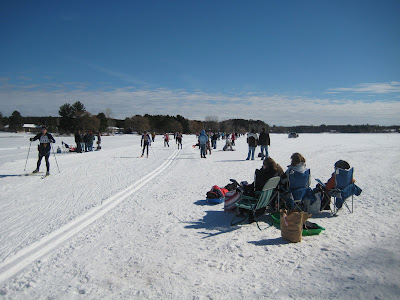 The lake, near where you get back onto dry land - people are just chilling, having a picnic, as the racers go by - its a sweet scene. 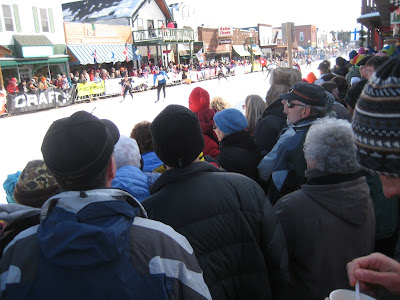 Finishing straight down main st. Each side of the street is packed with people, for the full 400m or however long Main st. is - its intense. The announcer announces everyone, too, which is really cool. 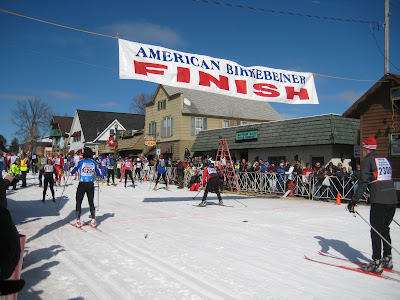 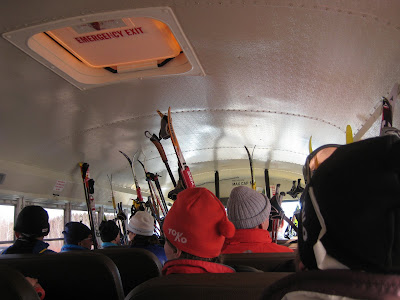 There was a lot of getting on buses this weekend. Including when I got on a bus and I shouldn't have, and spent two hours waiting at Telemark for Cary and Colin to come get me, while they were actually back in the condo drinking margaritas. Thanks. 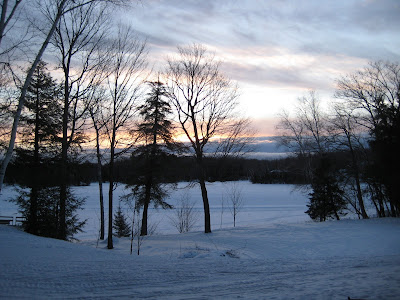 The view from our condo, this place is actually very pretty country. 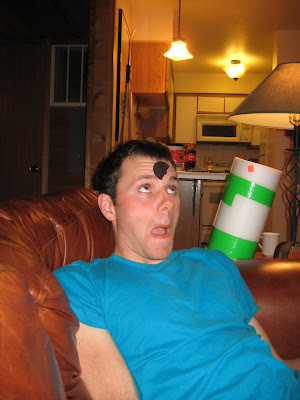 John in the midst of an intense game of oreo-face-nose-mouth. 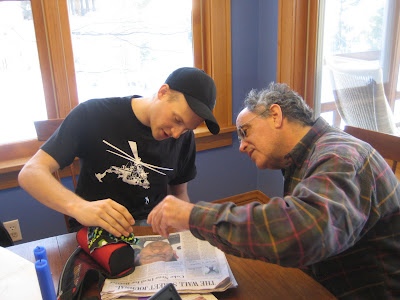 Colin and Mr. Blazar figuring out the best way to attach a fisheye lens to Colin's waterbottle-belt-cam.
Posted by Alex at 9:22 AM

Nice race! Looks like great conditions, and you turned in a pretty sweet time - the first page of women's results, online.

You have a guest-starring role in Paulette Niemi's race report:
http://skinnyski.com/racing/display.asp?Id=18765

She gives you a good line!