Greg and Ken Walker are crazy. I've known this for a while, but they're crazy in a friendly sort of way, which is actually the most dangerous type of crazy, because it sucks you into it without realizing that you're doing crazy stuff too. I joined them for an adventure race last summer, which went pretty well, at least in terms of team dynamics. I'm pretty sure neither of them ever get mad, which is a good trait for long distance events. Anyway, Greg was trying to convince us to fly out to Yosemite to ski for 24 hours with him, and although you could tell Ken was being swayed by the idea, I wasn't having any of it - skiing for 24 hours and its not a race? That's just stupid!

The reason this idea came up is that last year, Greg did what he called the "Yosemite 24". He had been living in LA, and would drive up to Yosemite to go skiing, ski in the morning, take a break for lunch, ski in the afternoon, and do it again the next day (did I mention he's crazy? At least by now he's moved to Tahoe so he doesn't have to drive as much). So, his dad made some rib about just skiing continually while up there, agreed to go do it with him, and the idea was born. Of course, Ken failed to show up, which meant that Greg did it alone. Since then, he's been bullying Ken into joining him for this year, and somehow I got included in that group of "wimpy east-coasters". As we sat in the sun after the Birkie, it was decided that we would just move the event to the east coast, because Ken and I had made it clear there was no way we'd be flying west. I thought I could still get out of this, because Greg didn't buy a plane ticket until a week ago, and I was sure I could talk Ken out of it, and more importantly, we didn't have a venue for this stupid thing, but it all sort of fell into place at the last minute. 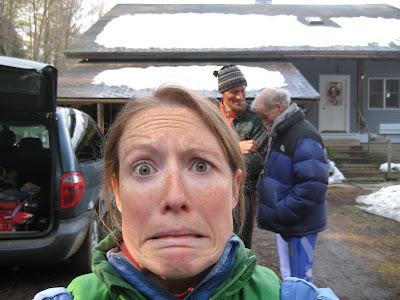 What have I gotten myself into?!?

The Danby-Mt Tabor road is a seasonally-maintained road going from Landgrove to Danby, in southern VT, that gets groomed for snowmobiling through the winter. Ed and I ski there a bunch when we're up in the winter, and more importantly, its not at a ski area so there are no insurance snafus to keep us from skiing through the night. The road is ~20km long, which makes a 40km out-and-back, with multiple side-road options into the Green Mountain national forest. All in all, a pretty good venue for skiing continuously for 24 hours. I was still battling some questions in my head as to why I was doing this, but I figured at the very least, I'd get some skiing in, hang out with two friends, and eat lots of kitkats. 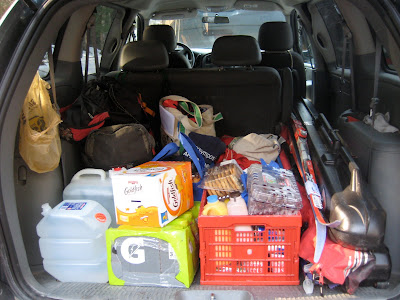 Somewhere in there are four pounds of Kitkats. We hit up Costco pretty hard before driving to VT.

The story about the skiing bit will be continued tomorrow... hang tight.
Posted by Alex at 8:48 AM