With no mass start, it looked a little silly to have people firing off one at a time onto the mass start area, since its a huge, wide-open field, but all the J2s got special instructions to not win the race up that hill, so things went well. Corey started 15 seconds behind Heather, who started 15 seconds behind Maddy, but they all took that in stride, and Corey won, with Heather just after, Maddy in 4th, Hannah in 9th, Heidi in 12th, and Cate in 31st, just 15 seconds out of the top 20! Those girls are some tough fighters and good skiers, I was pumped to be able to get out on course and cheer for them.

The boys all started in a group also, and that was a really close race - the top 5 were within 8 seconds. Jack was 2nd, 0.6s back, Eli was 4th, Paddy was 5th, and Hamish was 13th, in his first distance race as a J2! Devlin and Tyler had some tough races, but they're rallying well for tomorrow's race. I got to watch the older kids' races also, and some of those OJ boys were just super impressive to watch. The girls skied really well too, with Izzy C in 3rd for J1 girls and Kaitlyn Miller winning the OJ girls. New England won the day again (this is becoming sort of common, eh?), and looking at the Alaska cup points, we got more points on the first day than Alaska (2nd place) has total. We're ON.

Today was a training day, and after skiing the course and scraping some race wax, we took the kids out for an adventure - my group went to Marden's to pick up a proper outfit for bowling, and then we headed to the bowling alley. Upon arrival, however, we discovered that we only had 30 minutes to bowl until they'd kick us out (Great Lakes had reserved the entire place at 3:30), and it reeked like sweat and cigarette smoke, so we just went back. Fail.

The kids are preparing for tomorrow, and I'm sucking down cough drops so I can keep yelling at the same volume when I cheer for them. Gonna be another beautiful day! 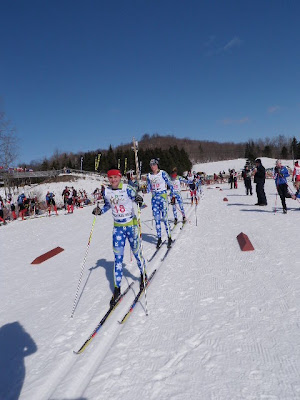 Maddy, Heather, and Corey lined up. 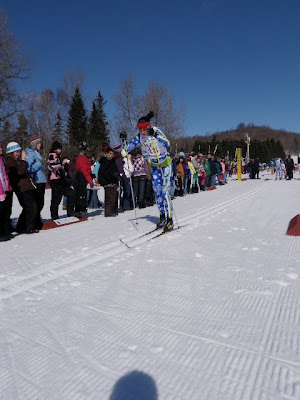 Maddy starting out - check out the LINE of spectators! 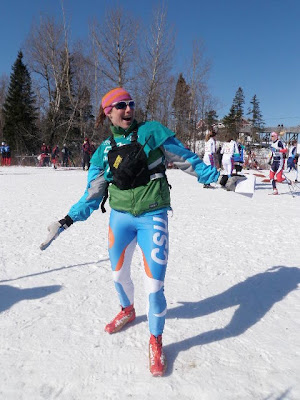 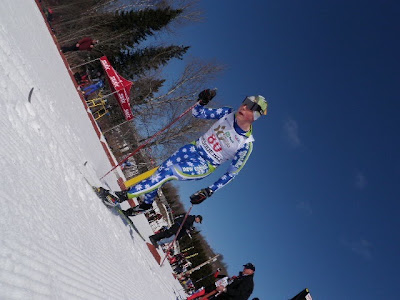 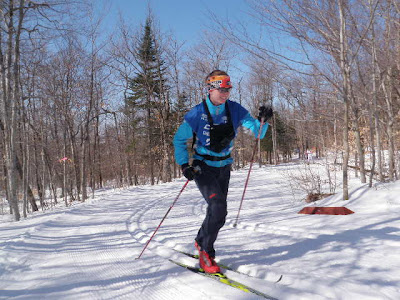