A couple weeks ago, a few CSU members were batting around the idea of heading to Ottawa for the COCs. Things ended up getting convoluted quickly, and then Ian broke his leg, so I ended up driving north alone. I spent Thursday night chez Paul Stone in Burlington, and left at the ass crack of dawn to get to Ottawa early enough to run on the model event map, to get my head around the terrain. Of course things couldn't go smoothly - As I pulled off the highway into the city, my car started to overheat. Naturally, I started cursing out Ed, why else would my car be having problems? Anyway, I managed to get to Carleton University, the site of registration, without red-lining the heating gage, and left my car there for the day. The family registering behind me in line were going to all the right places and had a spot for me in their car, so they took me under their wing and got me all the places I had to be. Thanks so much, Wil and Katarina!

Anyway, I eventually made it to the race site, for a 2:15pm start. It was at some guy's horse farm, which meant that all the trails were super rutted/pot-holed from horse hooves, but the terrain was super interesting, all these little rocky hills and thicker marshes in between - you had to be completely on your game to not lose contact with the map, because if you got lost, there would be no chance of recovery. Below is the map. 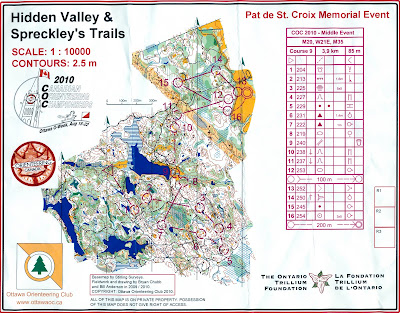 I started off on the wrong foot, by not realizing that the start triangle was right where they started us - usually there is a short run to the triangle so you can figure out where you are and where you're going as you run. Anyway, I had managed to get myself lost already, so I decided that I couldn't have gone that far, I'd just keep running in the right direction. That worked, more or less, and I eventually found features that made sense and hit the control. Just a 2-minute mistake, the bright side is that could have been much worse. Anyway, my orienteering never really got any better, I was very bobbly out there, and my ankles felt really weak and wobbly too - every time I went to run on a trail, I couldn't read the map because I had to pay such close attention to where I was putting my feet.

I ended up winning the split to the spectator control, but other than that, there wasn't much worth bragging about this race. Results, the W21 class (elites) are near the end of the other female age categories. There weren't that many runners, because a lot of the Canadian team has just gotten back from the World Champs, and is taking a break - poor timing, but at least the lack of depth meant that I got 5th. 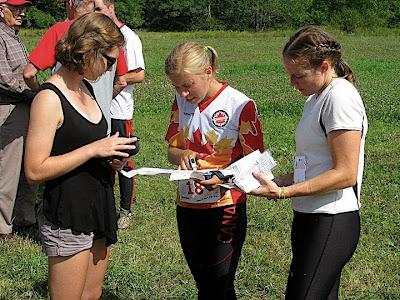 Comparing splits with Emily and Carol. Mostly to see how much time I was losing on each leg...

After a race that felt that hesitant and un-confident, I was looking forward to the sprint on Saturday to actually do some fast running.
Posted by Alex at 11:01 AM