I spent all weekend with the Teutsch family (thanks guys! You were awesome!), which almost felt like meet headquarters - Anne was doing registration, Erik was in charge of results and e-punching, Jeff had set a bunch of the courses during the week, Alex was manning the radio control, and Laura, other than winning everything in her age category, was doing a bunch of the registration volunteering during the day. Committed family! Then throw in a couple extra vagrants, and life got interesting. Meghan Rance, from Vancouver, Ali Crocker, her boyfriend Dan, and I were all staying there, and Igor from the Ukraine had been there during the week. Craziness, if I ever have a house, I want to provide housing for just as many broke 20-somethings!

Anyway, Saturday was the COC sprint, which was also billed as a World Ranking Event (WRE), so attracted a couple big names. Unfortunately, we needed three women with good enough WRE points for the race to count, and we only had two, since Emily wasn't racing and I don't have jack for points. Ah well, at least the guys had a WRE race.

I made the mistake of eating entirely too much for breakfast, way too close to the race, so I was a little worried I'd have some GI problems, but that didn't slow me down too much. I felt like I couldn't find either fourth or fifth gear, almost like I was cruising through the course instead of attacking it, and that left me enough oomph to win the finish split (we all know that is the most important split, anyway). The whole race was very controlled, for me, both physically and mentally. 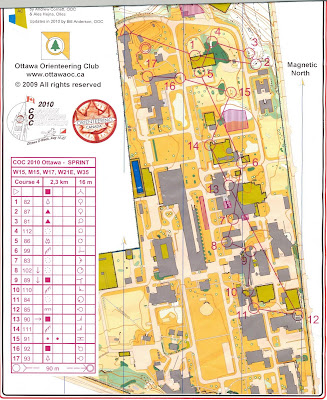 The only three things I'd change were my 30s mistake at 8 (I didn't see the flag tucked into the corner behind the shrubbery), a slightly different route to 13, and in retrospect, it would have been much better to run along the fence between the fence and the hedge to 14, instead of around the hedge like I did. Other than that, it was just a general lack of speediness that held me back. I did have snazzy new shoes, those helped with the mental approach! 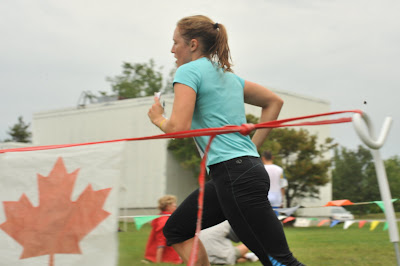 In the afternoon, Ali and I decided to go train on the Carleton sprint maps, from the chase sprint earlier in the week. We had some time to kill, so we ran both the prologue and the chase, as a "level 1 race" - you aren't allowed to go faster than your zone 1 speed. Ali gave me a minute head start, and on the prologue map, which was pretty straightforward, I beat her. But then on the chase sprint map, which was much trickier, I made a large mistake early on, and then two more ~30s mistakes, so she trounced me by a solid 1.5min on that one. But it was a super fun course, very technical and tricky, with some overpasses and tunnels and stuff. A good way to spend an afternoon! 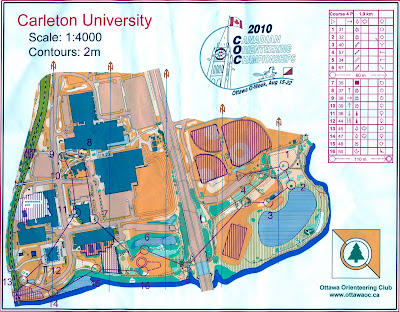 Prologue map (my scanner's colors are all messed up, way too blue) 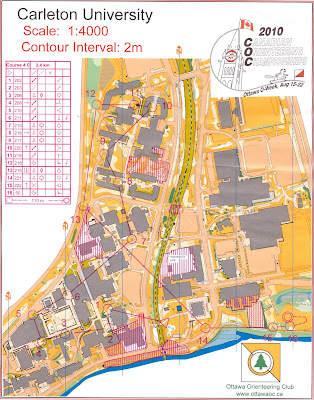