One of the fun bits about moving someplace new is that you get to explore the new runs and bikes and hikes and maps. Also exciting is that this place has hills, if you want 'em. There was one ride, a couple weeks ago, where I thought I was going to die - steep fast downhill, that you don't know, straight into a stopsign with a state road. Fun!

There is a trail around here called the Robert Frost Trail, that happens to run basically past my front door, and I have 47 miles of that to explore. Yesterday was just a short bit heading southward (although I was going east, that is the southbound direction of the trail), and its beautiful. Mostly singletrack, stringing together different conservation areas and hills and stuff, and despite humidity so thick I was swimming, it was a good way to spend my day. Most of the trail seems to allow mt bikes, at least only one part directly prohibits them, so maybe I'll head out on the bike and see if I can get a little further than on foot.

There isn't much for maps around here, Peter Gagarin lent me some maps of Northfield Mt and part of the Quabbin reservoir, but the maps haven't been updated in a while. Last weekend on my way up to VT, I stopped by the Northfield Mt Hermon School, to see what the terrain had to offer, and for the most part, I was having a good time. I was focuing on keeping some momentum as I ran, trying to use that momentum to carry me through the rough bits, and that thought worked pretty well for me. Again it was super humid, but either I'm getting used to humidity or its just not as bad as I think, because I was able to have a good time. 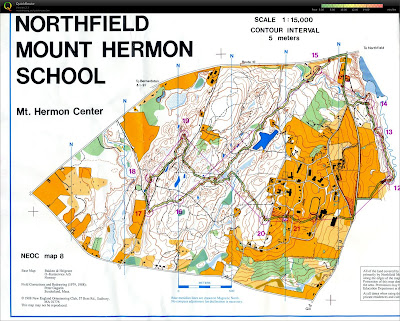 The Sugarloaf Athletic Club holds a 5k every Tuesday, so I was thinking of heading out tonight, but 90 degrees doesn't sound like a good time to race, so I might wait until next week. So many fun things to do here! So little time!

This weekend is the Canadian Orienteering Championships, so hopefully I'll get on a map, or at least do some armchair orienteering practice, before then. My carpool buddy, Ian, just broke his leg, cracking a stress fracture that has been bothering him for a while in a freak rollerblading accident, so I'd better take out some books on tape, its a long drive to Ottawa alone. But I'm excited to race, its been a while since I've done any of that! (adventure racing does not count as racing, too slow).
Posted by Alex at 9:08 AM