Ali and I headed over to Mt. Tom after work yesterday, to go do some orienteering training. We ran two courses; the first was a re-run of a red middle distance course from 2004, mostly downhill. Ali started a minute in front of me, and my goal was to move fluidly, and carry momentum through the woods, something I've been struggling with. I felt like I was mostly accomplishing that goal, and by #3 I could hear Ali crashing through the woods ahead of me. I got off my line a bit on #5, basically came out to the trail, not in very good contact. Looking at the garmin track, this is most likely because I was not actually at #4, but at a spur just above it. I can see how I made that parallel error, and I'm not going to worry about it too much since with flags in the woods I wouldn't have made that mistake.

Long leg to 6, I decided to go semi-straight, while Ali took the more handrail-y route, I think her way was better (as well as faster, but that is tough to judge when the person you're comparing yourself to is also a faster runner). I passed her (tying her shoe) on my way to 7, and thought maybe I could hold her off on the little control-pick 7-9, except I got all confused on my way to 10. Again, with controls in the forest I likely would have been fine, but its probably best not to rely on the luck of running into a flag when you get to more or less the right area.

I decided to take the river down to 11, and that was slow, and rocky, and the forest was really trashy. And then I came to the wrong reentrant, but caught myself. Another mistake on 12, although that really was a case of needing a flag, because the area was just so damn featureless. 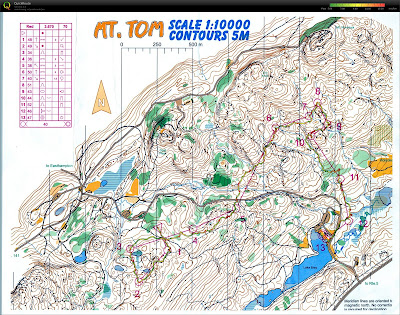 After that one, we switched scales and ran the Billygoat Gruff Sprint, from last spring, but backwards, and as a chase start, with Ali chasing. I had trouble switching from the 1:10k scale to 1:5k, stuff was just coming up so fast! I still managed to beat Ali on the first two controls, but she caught me up on the way to 5, and I was feeling the heat and feeling achy in various places - couldn't hang with her. I also decided to take the marsh route to 4, rather than going around on the bridge, and that was NOT faster. Look out for the swamp monsters.

Sort of falling apart the last couple controls, and Ali ended up putting two minutes on me overall, although I got her on a couple more splits. Overall, a super fun way to spend the evening, and I felt more comfortable in the woods than I've felt since last spring. Hopefully this bodes well for the US champs coming up in October! 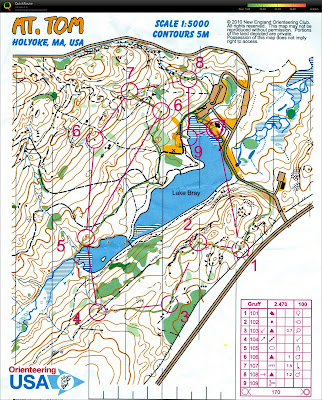