Oh man, I've never felt so slaughtered after a 7.8k course before. Or so relieved to be finished. The map was wicked awesome, super detailed, as you can see below - Lots of beautiful rocky ridges you could just flow along, interspersed with disgusting green bits and beaver dams. The area was truly amazing, but I was truly wrecked by the end.

The blister on my fourth toe ripped deeper at some point near the sixth control, and was getting progressively more painful, so that by the end of the race, that stupid blister was most of what I was thinking of, I just couldn't get it out of my mind. Worse, though, was when I ran smack into a branch leaving 5, it knocked me backwards and scraped my right eye, which was blurry and quite painful for the next ten or twenty minutes. After this branch-head collision incident, my balance was really shaky - crossing the beaver dam on my way to 6, I fell off four times, and I slipped off many beaver dams thereafter - having a lot of trouble with my balance. But I didn't want to drop out, so I just kept staggering along.

The first real mistake, as in I fell off the map, was on my way to 7 - I lost contact, didn't check my compass, and I still feel quite lucky that I actually found my way back to the control. I had already made an ~2min error in the circle at 2, but other than that things had been going somewhat smoothly. Then I lost probably 6 minutes, maybe 7 looking at the splits, in the circle at 9, just blundering around and being idiotic. That was where the course finished crushing my soul, and crossing more dark green beaver dams to 10, I switched from race mode to survival, so that by the time I had reattacked 15 twice and still found a control on a similar feature on a different course, I was ready to quit. In retrospect, a gel or two would have been an excellent decision. I was hovering at the edge of bonk-land - 2:10 is too long to race with no fuel. I barely even made it to the go control, just too wasted, and every step just hurt so much with that damn blister.

The lowest point was probably on my way to 8, fighting through some dense vegetation, on a beaver dam, and I slipped off the beaver dam (again) and fell in the deep end. Standing there in bellybutton-deep, mucky, warm water, with my head aching and my eyesight blurry, I said out loud, "This is not fun. I am NOT enjoying myself right now". Luckily, there was some nice open rock to run on afterwards, but there were definitely some negative thoughts going on in my head yesterday. That was tough, and I wasn't up to the challenge.

Take a minute and check out these maps - super tricky orienteering! All the bright yellow stuff is open rock, it was usually mossy and soft and quick running, so that you'd totally overshoot your attackpoint because you didn't realize you'd run that far already. 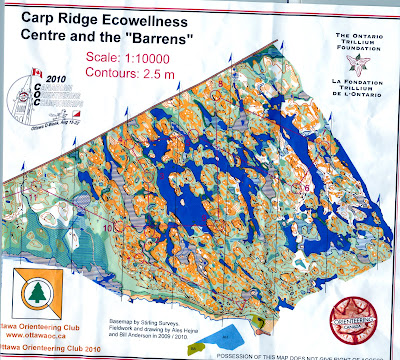