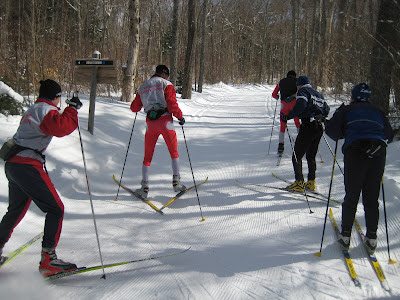 In case anyone is wondering, the skiing at Waterville Valley is still superb. I went up there with some CSUers, and it was midwinter conditions. Beautiful skiing!

Sunday dawned bright and beautiful also, so I headed out to Dedham for an orienteering meet, put on by NEOC, the New England Orienteering Club. I ran here last year, and I remember hating the area. I still don't like it, but I had a slightly better run. It was pretty chilly when I got there, and we had to copy our own maps. The map-copying area was in the shade, and I was shaking so badly that I had some major issues getting my control circles round. I should have taken more care, because some of my circles were a little off, causing a couple headaches... 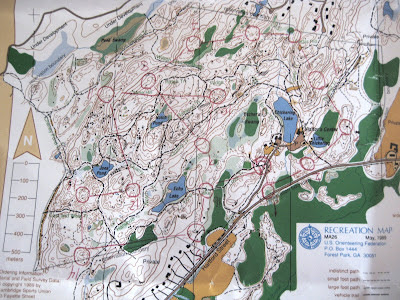 So I started off by bungling #1. I went into the woods too early, almost directly across from where the trail hit the road, and once in the woods, I remembered that I had meant to run the road. Then, instead of continuing on with what I had already started to do, I stopped completely and stood there like a ninny until I remembered what the heck I was supposed to be doing. I was a ninny multiple times on this course. #2 I did the same thing, went into the woods early, where the road crosses a hill, but this time I had planned that. Of course, I then went in the wrong direction so had to loop around and hit 2 from the back side.

In my shivering frenzy to get my map copied so I could go run, I had neglected to mark the changes to the map that the course setter had noticed. One change was that the trail to #3 was not actually there. That didn't throw me off too much, because I could just run the ridge, but I had managed to draw my circle too far to the east, so I was searching up the wrong reentrant for the control, which was actually on the west side. doh! 4 and 5 were clean, if slow, since I hiked/scrambled up the hill. Then going to 6, I ended up in the right spot, but on the wrong side of the little hill, and convinced myself I was in the wrong spot, running all the way north to the road and the pond before I realized I had been in the right spot and went back and got the control.

I ran out to the trail and went around the marsh to get to #7, and again, my control circle was closer to the marsh than the actual control. So I ran around for a while checking every reentrant (the control clue) in the area until I found it. At this point I was definitely cursing my sloppy copying. There was a group of people leaving 7 as I got there, and I tried to get around them on my way to 8, but ended up going too high up the hill, losing more time. From 8 to 9, I sprinted madly through the woods, only loosely in touch with my map and following a rough compass bearing. I slowed down as I hit the trail before heading towards the marsh, and almost overran the control by caught myself just in time. I was almost foiled by some boy scouts on my way to 10, but things were starting to come together for me now, and I got 10 with no hesitation. 11 was a longer leg, but again I followed a rough compass bearing and spiked the control.

At this point I saw two Austrian dudes who I'd last seen around control 3 when I was blundering around cursing life, and my competitive juiced stirred a bit. I hammered through the woods as they went around, and I spiked 12 and got enough away from the control that they couldn't use me to find it by the time they crested the hill. I blundered going into 13, though, by taking the trail to the south of the control and running up the reentrant on the east side of the little hill, thinking I was on the west side. The Austrian dudes caught back up, but the little trail to 14 didn't appear to exist, and they were stopped there looking at their map as I went around on the big trails to 14. I didn't see them again, but I don't know who won... regardless, I was motivated now, and I spiked the rest of the controls in to the finish. I think I've learned my lesson, though-- wear a puffy jacket when copying the map!!
Posted by Alex at 12:10 PM

Sounds like fun. I feel like running orienteering would be much more fun than ski orienteering, just because its so much easier to just get a compass bearing and pound away through the woods, hoping you don't get hopelessly lost