Ski to the Clouds 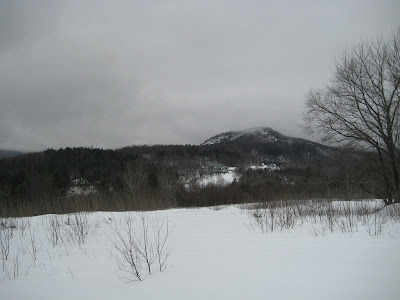 This past weekend, J2 skiers from all over New England were racing at Jackson. A wide range of abilities were demonstrated on those trails, and Massachusetts had kids over the whole spectrum. The morning was a 5km classic race and the afternoon was a classic sprint, and given the forecast of somewhere around 35 degrees and a wintry mix, I volunteered my waxing services to the Mass team, guessing we'd need all the hands (and wax testers) they could get. Luckily, the wintry mix was rain, and it didn't start doing its thing until the sprint was almost over, otherwise it would have been a much longer day of standing around waxing and screaming and cheering and running up and down hills. We had some good results in the classic race, one of the girls I coach ended up third, which is awesome! I had missed the skate race on friday, showing up right as the sun was setting. The wave is an awesome downhill on the Jackson 5k course, but the wave in the dark is even awesomer. A huge thanks to the Burnhams for letting me spend the night in their house up there! 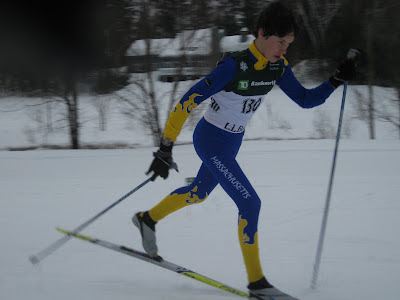 Chris Burnham showing us how its done.

I skipped out on the relays on Sunday to race the Ski to the Clouds race up at Great Glen. This was a really cool race-- it started with 4km on the Great Glen trails, and then finished 6km up the Mt. Washington auto road, 2000 feet higher. Instead of the sunny 40 degrees I had waxed for, Mt. Washington valley was surrounded by a cloud, with blustery snow and ice all over everything. They had to shorten the race, finishing at 4km up the road instead of 6km, because the planned finish area was supposedly glare ice. Nobody complained!

I sneaked a peek at the start list, and saw that I only had Kathleen Maynard and Kelsey Allen to race against. I was guessing that I could climb with Kathleen, but I knew Kelsey would be faster up the hill, because she can't weigh more than 85 pounds. My race plan was to go as fast as I could on the flat part, and then ski controlled up the hill. Unfortunately, my calves had other plans. But we'll get to that.

They fired the cannon (no, Great Glen can't just use a gun--they use a CANNON to start their races. It's fantastic), and everyone takes off double poling. It was really windy, so I just kept double poling within a tight group of masters until we hit the woods, where things spread out a little bit. Before I knew it, the first 4km were over, and the auto road was looming. It is definitely steepest at the bottom, either that or you just get used to that grade higher up. They had recently groomed it, but it had set up fairly nicely on either side, as long as you avoided the middle. I was alternating 20 strides V1 left then V1 right, so as to not tire out one side more quickly than the other, but for a long while the road was tilted up to the right, making it faster to V1 right.

I started the climb feeling hopeful, thinking that if Kelsey passed me I might be able to ski with her, but very quickly my calves made themselves felt, cramping up worse than they had at Rangeley. I tried to relax, but every time I would drive my knee forwards, my calf would cramp up more, resisting the stretching motion from bending at the ankles. This gave me a very upright skating position, which I figured I could keep up, but it was slow. As the climbing continued, the cramp in my calves got worse, although it was definitely worse in the left one than the right. When Kelsey passed me, I skied with her for about 45 strides (remember, I was counting), and it didn't feel that hard cardiovascularly, but my calves were rebelling in a way that I knew would cause me to sit down soon, so I had to back off. As Kathleen went by, we had a conversation, I forget about what, but it was frustrating to know that if I could just cut my lower legs off I would be able to ski.

Frustration aside, it was a beautiful climb. I almost wish I'd skied with my camera. I felt like I was out for a hike, ascending through the mists to who knows where, the road looking out at these ravines going off to the sides, occasionally clinging to the side of a mountain and sometimes following a ridge. I had no sense of time or distance, I've never had to climb uphill continuously for 4km before so I didn't know how long it would take, and when I finally got to the finish I was convinced that I'd only gone 2-3k. I was about a minute behind Kathleen and something like 3-4 minutes off Kelsey, but I didn't stick around long to chat, because although it wasn't as windy there, I knew it would be frigid going down. I had managed to miss the clothing drop-off cut-off time, so I would have to descend in my race suit. Luckily Kathleen had an extra wind breaker, so I pulled up the hood, settled into my snowplow and started down the hill.

I thought it would be fun to ski down the auto road. I thought wrong. Maybe metal edges would have helped, but it was littered with death cookies that I either didn't notice or ignored on the way up, and the grade was steep enough that I had to stop four times to rest my legs. Mostly it was my calves cramping, probably residual crampy-ness from the climb, but coming down was much harder than I thought. By the time I hit the bottom I was so cold I was completely useless, and the whimpering noises were trying to come out of my mouth as I struggled into my warmups before skiing back to the lodge.

All in all, that was a great race. They are absolutely right to lable it as America's toughest 10k, because climbing for 4 (or 6) kilometers is no easy task, even when done at a controlled pace. Although I was frustrated at essentially finishing last for the women (the next women were 10 minutes back), I was glad that I raced. This also marks the first race where I have ever accepted prize money... does this make me a pro? 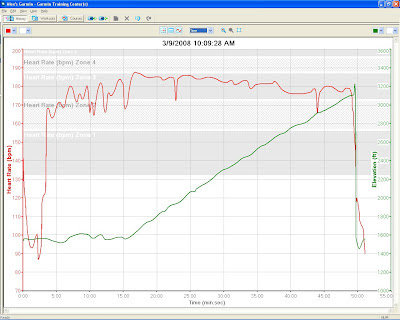 This is my HR graph from my garmin (have I mentioned I love this thing?). Note the drop in HR as the elevation climbs... even fat kids should get out of breath as they climb higher. yargh. 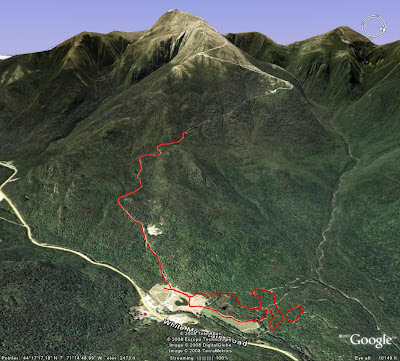 This has got to be one of the coolest Garmin maps ever. I think the original finish was supposed to be up at the treeline.
Posted by Alex at 11:45 AM

Wow. Congratulations again on the good result. That sounds like a fantastically cool and fun (in that sick, XC-skiing way) race. Maybe you don't know, since you were racing, not spectating, but what kind of technique did most racers use? It sounds like you skated it all; did anyone try to stride it?

Based on my quick look around the start-line, there weren't too many guys on classic skis. I would not have wanted to try and wax for the loose, icy, snow, but I did see some classic skiers heading up as I was heading down. I would guess it was ~70-80% skaters, 20-30% classic skiers. The classic skiers lost out big time in the first 4km. I know for me, even with my cramped shins, I was moving faster in a slow V1 than I would have in a slow striding shuffle, for similar amounts of energy expenditure.

When we were there a few weeks ago they said that in the past it had been much faster to go up the hill classic, assuming good waxing conditions, which it was not. As painful as this race would be for a big guy like me, I'd love to do it sometime.

ps- I saw you snapping pictures while we were forerunning the race on Saturday....did you get any good ones of me?

Congrats on a good race! I think you likely did the part of the auto road that we TT up for Porky Gulch in the fall - the first 2 miles. That sucker is BRUTAL! I can't imagine doing it on skis - you are my hero!

BTW - my least favorite part of racing up 2 miles? Coming down. On a bike, this is frightening as well, and makes one completely appreciate why the folks who climb all the way to the top have to come down by car.

At least when you ski down the hill, your breaks won't melt away to nothing and stop working... plus, you can fall to stop yourself as a last resort while skiing, and this is generally frowned upon when riding bicycles.

I still think skating up that road would totally burn out my thighs. Its bad enough running it, but I think skating could be worse....then again, maybe not!

Jamie, the road isn't actually all that steep. I should have gone back and taken a picture of it after the initial bump (to scare away wannabes, I'm sure). Of course, maybe I was just so focused on my calves that I didn't notice my quads. Regardless, you should do it next year!