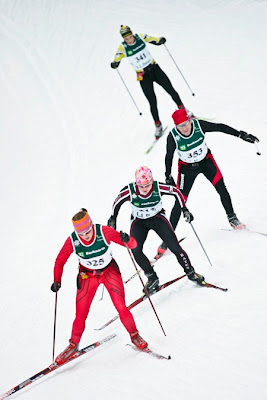 Saturday was one of those awesome days when you get up at 4:30 in the morning and go to meet your ride north and he's still asleep... luckily, Blazar rallied quickly and then drove really, really, fast up to Stowe for Eastern Highschools. I was wax bitch again for the classic sprint and mixed gender, mixed technique relay, and as with J2s, I learned a ton about klister waxing, and got even better at applying klister without a bench. Our Rhode rossa-multigrade mix worked awesome, and Olga (one of my CSUers) won the sprint and Nadja (another CSUer) was 9th. A western Mass kid was 6th, and Chris Stock (CSU) was 12th in the sprint. The afternoon relay was fun to watch, as it was girl-boy-girl-boy; classic-classic-skate-skate. We had good wax again, and our first team ended up winning. A fantastic day for Massachusetts! They followed it up on Sunday with Olga winning the classic race for the girls and Chris winning for the boys. I should mention Isaac Hoenig was 4th in the guys' race and Jimmy Burnham was 11th! These kids know how to ski, and its exciting watching them put it all together. 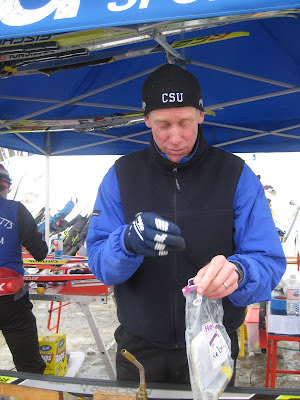 Jamie getting the good stuff going... 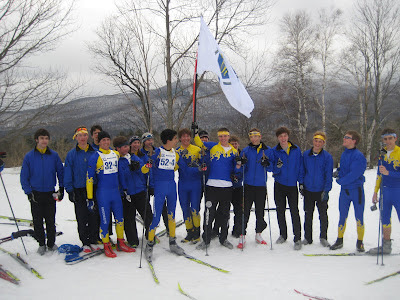 The Massachusetts EHS team waving their state flag (appropriately attached to a ski) after winning the relay!

After the relay, Blazar and I booked it over to Sugarloaf. In Blazar's words, he "drove like a rockstar", and I only put my foot through the floor a couple times. Needless to say, we made awesome time, and I got to bed relatively early hoping to feel rested for the marathon. I've been pretty tired all week, so I didn't have high hopes of feeling good, but apparently you don't need to feel that good to do well. I'll admit the start list was pretty thin when it came to girls, but given the way I felt I preferred it that way. Robyn Anderson and Lauren Jacobs were the two I thought I might have trouble with, so when the gun went off, I got right behind Robyn. She was going really slowly, though, so I decided to go a little faster.

The course started with a long, gradual uphill (the garmin data is coming, hold your horses) for about 4k, then some rolling ups and downs and then some screaming downhills, with some tight corners and high speeds. Then there was some more loopety-looping on trail 10, and the lap finished with some flat stuff going into the stadium, at 16km. Three laps of that and then you could finish. Pretty hilly, but fast conditions. My first time up the hill I took it pretty easy, just barely into L2, since I hadn't gotten around to warming up and bad things happen when I don't warm up and then go too hard. No girls passed me, so I was comfortable going my slow speed. At the top I looked back and didn't see Robyn, just Lauren was behind me, so I decided that I didn't really need to go any faster than I had been. On the rollers after 4k I came to realize that my skis were ROCKETS, I was dropping my pack like nobody's business. I was skiing slow enough that they could catch back on, though, so it was pretty easy skiing the first lap. I had borrowed these skis from Dorcas, since Alpina is now bringing in Peltonens and she wanted me to try them out. Gotta say, I like them a lot.

Near the end of that lap, Lauren took the lead for a bit, and she was definitely going faster than I had been going. I didn't like this, so after a while I took the lead back and we slowed back down to granny speed. I made sure I was eating and drinking a lot, because I didn't want to do something stupid and get beat in a race I was basically controlling, and the Colby kids (who ran the race) were really helpful at the feeds.

Going up the big hill the second lap, Lauren took the lead again and sped up. This was faster than I wanted to go, but still within my comfort zone, so I just stayed on her heels and found a rhythm to settle into. She admitted at the top that we had just been going a little faster than she had wanted, but I'm guessing she was seeing if she could drop me. At this point we started chatting a little more, and then the downhills started and my rocket skis carried me away. After the long downhill of death (straight down the fall line for ~200 feet, then a 180 at the bottom), where my GPS says I hit 35 mph, I wrecked pretty hard on a relatively fast corner. It was one of those "look where you want to go, not at where you're going" situations, I was staring at this tree hoping I didn't hit it, and the rut I was following shot me into the woods and slammed me into the tree. I lay there in a heap of limbs and ski equipment for a second, doing the mental check to see if any body parts were broken. Nothing was sending jabs of pain sharp enough to cut through the adrenaline, so I moved on to the "check your equipment" step. It all looked intact. Now I just had to extricate myself from this awkward position of being stuck in the snow amid the trees. At this point Lauren went by, saw me there, and came to a stop. "Oh my god! are you ok?!?" I guess I looked more tangled up than I thought. Yup, I'm fine, nothing broken, carry on...

By the bottom of the hill I'd caught back up, and I skied cautiously behind her for most of the rest of that lap, finally taking the lead again when the tingly feeling in my left leg went away. Crossing the bog headed out on our last lap, Laurent mentioned that she'd be taking the downhills pretty easy this lap, since "our" legs were tired, and I thought that was a very good idea. We kept it smooth up the long hill, and then I pulled away quickly at the top as my rockets picked up speed. I was sliding more of the corners than I normally would have, but I had made it this far and I didn't want to wreck again. The plow made its appearance in more than one place; the downhills were scraped pretty clean of snow at this point.

By the time I got to the bottom, I was still feeling relatively fresh, and I let Lauren take the lead through trail 10 to see how she was doing. She put in one or two semi-surges, but I could tell she was tired, and I figured the easiest thing would be to wait for a sprint, since I didn't feel like working any harder than necessary. This was also the riskiest strategy, since even though I felt pretty fresh, I still would have just skied 48km, and that can lead to me doing stupid things, but I didn't feel like breaking away now and working hard for 2k. We crossed the bridge and I let my skis take me past Lauren on the downhill. The last hill of the course she tried to pass me, so I put some power into two or three V1s to get over the top of the hill, then cruised along in a fast V2alt to the finish hill and into the finish, about 5 second ahead of her. The Colby team was going nuts, it was awesome to ski into what felt like a home-town crowd at the front of a race. 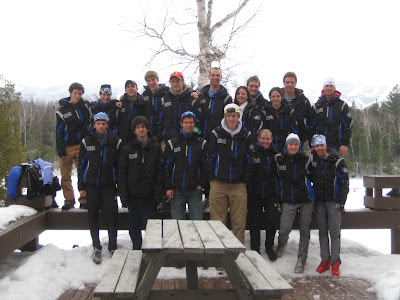 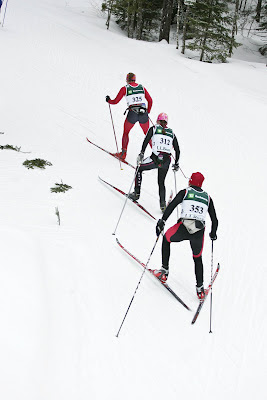 All in all, this was a fun race to do, even though I was butt tired going into it. I lucked out in having a thin girls' field and fast skis, but I was proud of how I used my head and didn't do anything stupid like stop eating at 32km. Unfortunately my left hand is pretty badly sprained from my little run-in with the tree, but I'm lucky to have escaped so unscathed. In my experience the tree usually comes away with less damage than the skier...
Posted by Alex at 12:24 PM

Congratulations! That sounds like a great race - in the as-an-event and as-a-competition senses of the word. A good way to end the season (almost), too.

Congrats on a good race! Also sounds like a pretty reasonable course compared to a few years ago! Isn't it sweet when you have really good skis!

Congrats! Careful with that hand though - I sprained some fingers in an MTB fall two months ago, and now have an appt with the hand specialist next week... I hope yours heals quickly!

Correction- Jimmy was 10th in the classic. Someone ahead of him got DQ'ed I think.

Sorry bout that Luke, last time I looked Jimmy had been 11th. You guys rocked it!