Maps from the Sierra Ski-o champs

I've finally got around to scanning the remaining maps from the Sierras. These were the interesting ones, so its worth taking a look. 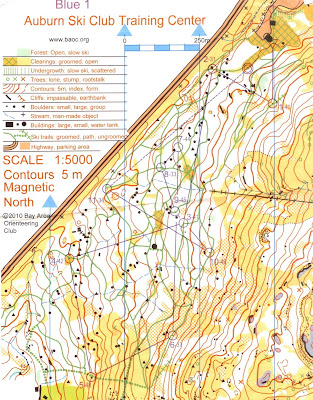 The first map from the Auburn Ski Club day - we were handed three maps on the start line, stapled together. Supposedly, the trick to this is to rip apart the maps (no more staples), put the second and third maps back to back in the map case, and the first map on top of that. Then put that whole bundle into your map holder. In theory, this is a good idea, but in practice, the map holder's snaps cannot snap through three pieces of paper and a thick plastic bag. I got two of the snaps closed in the minute I had to get all this done, and the third one sort of just flapped around, causing me to lose my map when I bit it on an ill-timed shortcut from 3-4 (I wanted to see how it was to cut through the woods. It was never a good idea, there, fifteen feet of Sierra cement will bury you quite quickly).

Anyway, this is what it looked like as I tried to get my maps into place - poles off, completely not ready to start, and never got a chance to look at the map before skiing. Given how slowly I went on that day, it didn't matter that I wasn't ready to blast off at the start, but still. Gotta at least try to look good at the start... 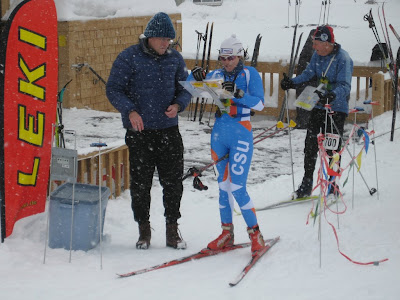 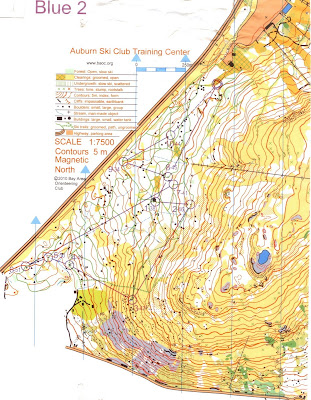 Check out the route from 3-4. That snowshoe trail was NOT there. Which left me a wide open hillside to attempt to carve some turns on skinny skis. At least that time I didn't break my binding, like I did at Tahoe-Donner. Also check out how many trail junctions there are! Thats what I mean by interesting, lots of decisions to make, all the while slogging along through deep snow at altitude. Oops, I mean, while zooming along racing fast.

I didn't get around to scanning the third map (rather, I scanned it, but the file corrupted itself), but thats ok, because it was super short, not sure why they felt it necessary to have three maps. At least on the World Cup when they do map exchanges, there is a place you ski through (the lap, basically) where you drop the old map and pick up the new one. None of this attempting to snap your mapholder through three pieces of paper and a plastic bag. 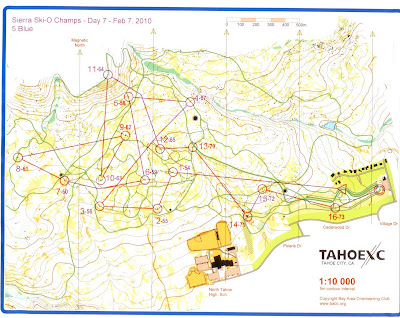 This is the course from Tahoe XC - the beautiful sunny day. Greg and Ken snowmobiled all the dashed trails, so that they were super hard and easy to pole on, and except for #11 (that pointless climb to the top of a mountain), the course was nice and flat, which is good for when you're already tired from a week of racing at altitude. Results are finally up from the week, as well as splits, and on this last day, I won 7 splits out of 16. I bet if my fluoros hadn't worn off I would have won the entire thing, although I guess if the other guys had used fluoros it would have been a fairer race.

And you can have even more photos!

While we're talking about ski-o, I should mention that the results are up from the first two days (which actually were just one course, offered over two days for people who couldn't make it the first day - don't ask) of competitions in the Ski-o festival going on this weekend in Vermont. We'll try to get some maps and splits posted next, but first things first, results!
Posted by Alex at 12:50 PM