This might get long. I have a lot to say. There are pictures below if you don't feel like reading...

Ski-o has creative names for their races, like "middle distance" and "long distance". At least it tells you what to expect, more or less. The middle distance race was held at Beaver Brook Farm, in Marshfield VT, and it was 5.8km (straight-line) for the women's elite class. This is a ski area run by Vivian and Mike Fritz, which happens to be mapped to A-meet standards and maintained for ski-o through creative logging, and it is sheer awesomeness. When Ed and I pulled into their driveway after Sunday's race, I just sighed, "ahhh, back to paradise". They have a massive barn, that sent Ed into spasms of envy, with so much room for so much crap and all these tools of every sort - I guess Mike does a fair bit of woodworking, but he is also the regional rep for some snowmobile grooming company, so he has all the up-to-date grooming stuff, although I'd be lying if I said I could remember anything he said about that. Vivian is an amazing cook, who managed the whole refreshments deal during the ski-o race, as well as dinner for all the volunteers who were staying there each night. She is one of the most organized people I have ever met, and that, combined with Mike's uncanny ability to turn two inches of ice into a skiable surface, made for a truly well-run event.

Ed was taking care of all the epunching for the weekend (and the events that bookended the weekend - Thursday at Morse Farm on a half-finished map - don't get me started on that rant, and I wasn't even there - and monday and tuesday in southern VT), so he drove up Wednesday night to help set things up. Basically, he had a mobile O-truck traveling around, with the printer (giant laser printer thing, couldn't a little inkjet do the trick?), all the tripods for the controls, all the epunch units, the boards to which the epunch units were secured, flags, boxes of rental mapholders, other boxes of random registration supplies, and pretty much anything else you can think of that would go into running a ski orienteering event in a really professional manner. I was impressed. Whenever Ed is in charge it makes for a really smoothly-run event, which is a nice change from some past orienteering experiences we've had...

Anyway, I showed up Friday night, and Saturday morning was sunny and gorgeous, and since I was one of the last starters, I had plenty of time to hang around and be social, because as it happens, I know EVERYONE who does ski-o. I guess its not a big group, but we had 72 starts, so it was more than we expected. The M21+ class, the elites, were pretty competitive as always, but most exciting was the fact that we had three serious competitors in the F21+ class - myself, Ali Crocker (skier extraodinaire who almost made the olympics in 2006), and Erin Nielson (nee Olafson, skied for UNH and is one of the best summer orienteers in the country). This was going to be fun! There were a bunch of other people, too, but the competition was going to come from Ali and Erin.

Due to the low snow conditions (remember all that rain we got in mid-January? Yeah, we haven't gotten any snow since then), the trails were pretty narrow, and really bumpy - the snow hugged every contour of the trail, which made for pretty old-school skiing. You had to be on your game to balance on that at any sort of speed on a gliding ski. The course notes talked about a couple spots where there wasn't any snow coverage, but for the most part, the trails were in good conditions, with some tree droppings but no rocks. I went out pretty much last, which meant all the downhills had been snowplowed down to glare ice, but thats good, because it makes them faster. Or something like that. Below is the red course map - 14 controls, and some really interesting route choices. We weren't given any time with the map before starting, so it was a little hard at first trying to read ahead while still moving fast and in the right direction, but by the time I got to 2, I had figured out my routes for the first half of the course and was concentrating on skiing fast. I navigated cleanly through #5, and then I decided that I wanted to take the high route to 6 - the one that goes to the skier's right. However, I thought I was moving faster than I actually was, and I turned left at the first junction, instead of the second one, sending me down to the marsh and losing about 2 minutes on that leg. 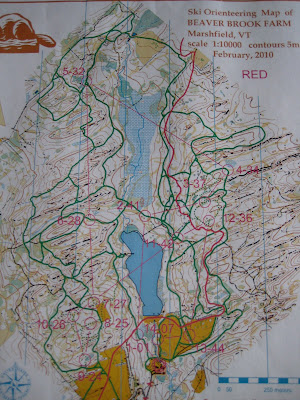 I took a slightly less than ideal route to 7, also, but then 8-10 were clean, and I felt like I got back into my groove, but not so fast. Looking at my route to 11, I thought I was on the lower trail by the lake, instead of up on the upper trail, so I planned to go around the south end of the lake - plus, that looked flatter, and this place had a lot of hills. However, I was actually on the upper trail. I realized this quickly enough, but at that point I'd already started down the trail, so I cut across the corner of that field by #8, and started skiing down the hill. There wasn't much snow, and I was bushwhacking on race skis, so this was bound to end badly. I managed to stay upright, but about halfway down the hill I realized how stupid I was being, and somehow managed to come to a successful stop without breaking anything. I whipped off my skis and bounded down the rest of the hill, which was much easier running than skiing, and then got my skis on quickly and zoomed around to the control, but that was another minute lost. The rest of the course was clean, although I took a shortcut from 13-14 across the field, which had a big open area on the far side of a hill that I didn't see until I hit it - luckily, my reflexes kicked in, and I was able to run across it quickly before falling on my face. Doesn't matter what the wax is, skis don't glide too well on grass!

I ended up beating Ali by 2:52, which is darn close in a ski-o race, but luckily she made some mistakes as well. Erin was another 3:20 behind Ali, with a couple mistakes on the last controls. It was a close race, and we were all excited to have some competition. You can see the splits on attackpoint - hover your mouse over the usernames and you'll see actual names. Those are splits for the entire red course, which also includes the M-18, M40+, and M55+ classes, although the top three girls were top five overall, only getting beat by the 18yo boys, rather than the old guys. Splits. 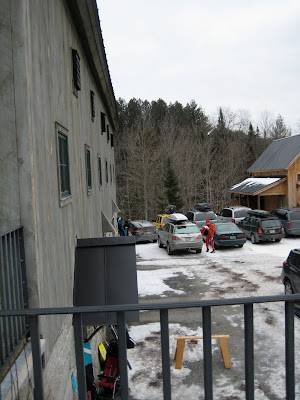 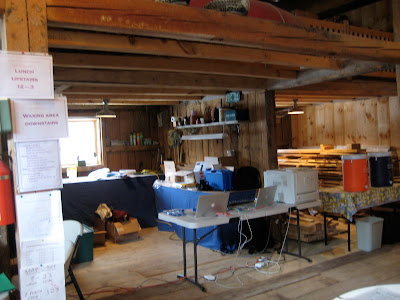 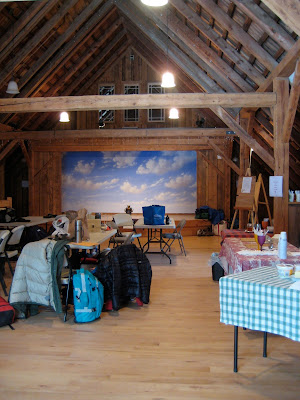 The awards and social were on the third floor of the barn. 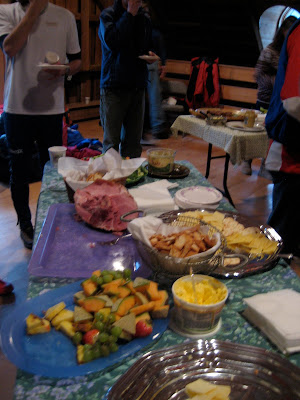 Remnants of the feast Vivian prepared for after the race (there were two more tables like this, but with even more different types of food. heaven!) 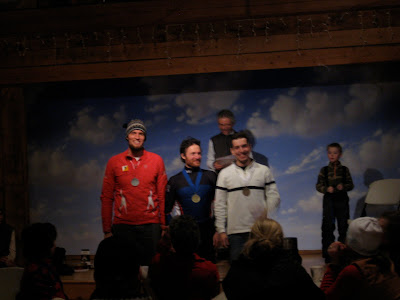 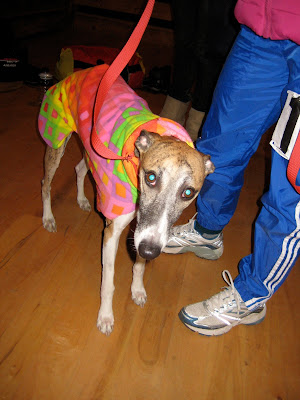