The last day of ski-o for me last week was the US team fundraiser sprint, at Kingdom Valley Trails in Chester, put on by Ken Walker. With Monday being a holiday, I could stay north and try to win the finish split, for which Ken was giving out the grand prize of a cowbell. His trails been hit pretty hard by the rain, so there wasn't much snow to speak of on the trails, even though he and Greg had spent six hours Sunday night shoveling. The course was pretty short, just under 3k, and mostly on a hillside, so I figured it would be fast, and that, combined with the map scale of 1:4000, would make for a pretty tough course, navigationally. (I'm sure that's a word.)

I started out and quickly realized that I was outskiing my brain. Luckily, I had planned to take this as an easy workout anyway, so I slowed down, and was able to read ahead a bit more. The first couple controls were on the flats, and the snow seemed pretty good, but once I got into the woods and started climbing, the snow was replaced with pine-needle-riddled ice. Damn. I picked my way through the rocks, pine cones, leaves, and dirt, and nailed the next couple controls on the uphill. I'll admit I was a little apprehensive of what would happen on the downhill, since I doubted I'd be able to stop quickly if I had to, but luckily the trail I took to get down had more snow on it, and I didn't add to the gouges on my dedicated ski-o skis.

After control 12, the course left the hillside and entered the pines, which meant even less snow, but more interesting route choice options. The second time I did the course (since it was a fundraiser, you could do as many runs as you wanted, you just added money to the jar each time, and the fastest time of the day got the grand prize - another cowbell), I took better routes to 13 and to 16, saving about 20 seconds on each of those. On a 40 second leg, that's significant! The first time I'd approached 13 from the bottom of the hill, and the second time I turned right after crossing the bridge and approached from the top of the hill on the big trail. 16 I'd gone around on the big trail the first time, but the second time I went straighter, on the narrow trail. I'll post the map real soon now.

20 was fun, that was a fast little narrow trail with a pretty big drop to my left, but I stayed upright, and the second time to 21 I went straighter on the narrow trail, and again saved ~20s doing that. My second run was 19:12, and the first was 20:20, so clearly the different routes were better. The finish split, unfortunately, was not fast enough to beat Scott and Greg, they were 16s and I was 17. Alas.

Here are splits from the long sprint. And here they are from the short sprint. A couple of the boxes had gotten out of synch, which is why there are some funky splits in there, but at least it was the same for everyone. The short sprint was fun, it used the same controls as the long one but out of order, and didn't go up the long hill, so the snow was a little better. The reason my finish split is so slow is that I thought I'd gone faster on previous runs, whoops. 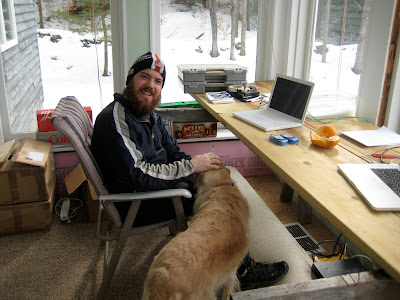 Ed with Casey (the dog) in his sweet timing hut. Hut, porch, whatever.

Tuesday morning I got up early to help Ed set controls over at Grafton Ponds, but I couldn't stay for the race, had to go to work. It was a fun "week" of events, and I really enjoyed having Ed make everything run so smoothly. Can't wait until next year!
Posted by Alex at 12:13 PM