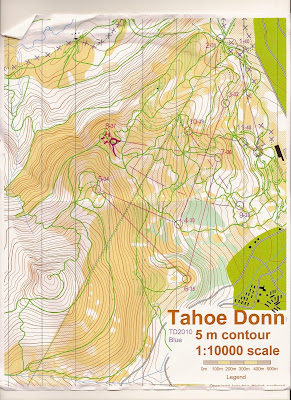 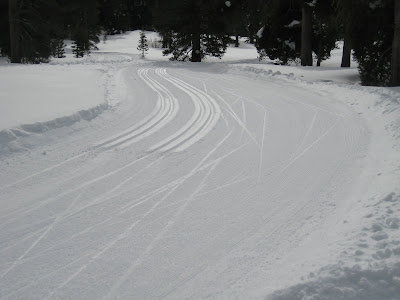 Tuesday's race was at Tahoe-Donner XC, and was supposedly the hilliest course we'd see all week. I missed the two races at Bear Valley last weekend, since I was racing Craftsbury and coaching at Women's day, but I was psyched to have a different experience with Californian skiing than last time. We got to the race site around 9:30am, and the first start was at 10, so there was plenty of time. The snow wasn't slushy, but it was sunny and warm out. After testing some skis, the Q1.3 Peltonens with Start LF06 won out over the Q3 Peltonens with the Start LF04. (Start does their numbering backwards, if you're used to Swix). They were pretty quick, but I didn't feel like I should put on higher fluoros, since I wasn't going to be pushing all that hard during the race. Greg and his dad bullied me into racing the blue courses all week, so I left Sharon Crawford to destroy the red course on her own. Apparently, if you're female and skiing the longest-offered course, you are an Amazon. So, I expect everyone to refer to me as an Amazon from here on out. Thanks.

I didn't do a warmup, because I was hoping to keep things no more intense than L2. Being smart, its a new thing for me. With 380m of climb over 10km, it was going to be a hilly course, but I figured I'd use efficiency (in both technique and in navigating) to try to not be last. The first couple controls were pretty straightforwards, and then the fourth one I took a route that involved a lot more climbing than I would have liked - that I could have avoided! The fifth control was at the top of the mountain, and it was a long slog to get up there. Given where the sixth one was, I decided it would be fastest to try and cut straight down the side of the ungroomed mountain, rather than go all the way around on the trail. It was a significant distance and elevation-gain savings, so I went ahead with that plan.

The first couple hundred feet were ok, and then the slope pitched downwards, fast. Undeterred, I tried out a couple turns. Given the depth of the powder and the skinniness of my skis, those weren't too successful. I found that if I snowplowed while leaning way backwards, I could check my speed somewhat successfully, so I did that until I caught an edge and went down in a poof. Man, this stuff is deep. I managed to get up, and continued my downhill, slightly-controlled fall, and then tried out a couple snowplow turns. These didn't work too well, and I was picking up too much speed, so I sat back on my ski tails, hoping to ride out the rest of the steep bit. That was when I noticed that my right foot wasn't really attached to the ski. It looked like the binding was mostly off of the ski, but a wee bit of the back of the front part of the binding was still there. Well, shit. I pulled off that ski, and discovered that clearly the best way to get down the hill was to crouch over one ski, with my right hand holding the other ski, dragging my right knee behind me to control my speed. I could almost even control my direction!

I finally came out to a groomed trail, and I had to figure out what I wanted to do with myself. I was about 3/4 of the way up the mountain, and the next couple controls ranged around that area, including one with a fair bit of climb, but none of them came near the lodge, where I could supposedly switch to a non-broken-binding ski. I knocked as much snow out from under the binding as I could, and decided that if I just double poled, and kept the pressure off that binding, I'd at least make it down to control 6. That worked well, so I figured that since control 7 was a traverse of sorts, I'd keep going to that one. Double poling and snowplowing on one side only (I didn't trust step turning) also seemed to work, so I decided to continue on with the course. I could sort of coach-skate, as long as I didn't do it too powerfully, and luckily for me, I wasn't do much of anything powerfully.

I climbed back up most of the mountain to 8, and then went bombing down to 9. I was taking a shortcut on snowshoe trails when my ski took off down the hill without me. Ack! Luckily, it came to rest not too far away, under a pine tree, so I went to retrieve it. My binding was attached to my boot, but not to my ski. I picked it up, knocked off most of the snow, and saw to my surprise that it wasn't broken. I guess the snow on that initial descent had just pushed up underneath it and pushed it off the NIS plate. I slid the binding back onto the NIS plate, and while I couldn't put it on there securely without the binding key, it was on enough for me to finish up the course, with a somewhat respectable time. Honestly, I don't think I lost that much time fiddling with various binding issues, although it sure was annoying. 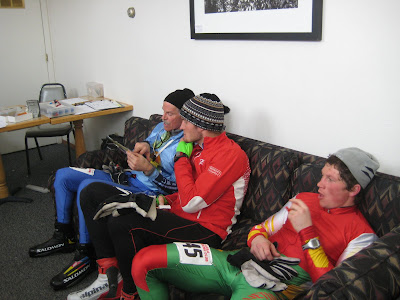 I ended up beating at least two people on blue, I haven't seen the entire results, but as far as I know, there were three who beat me. Not a very big field... So, since the weather was still gorgeous, I went for a relaxed ski up Euer valley. Its so pretty here when the sun shines! 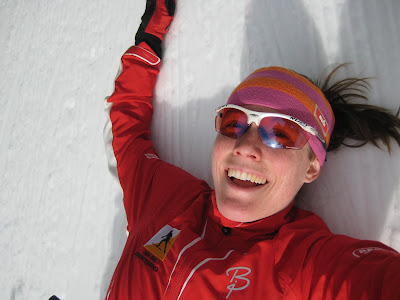 It was this sort of day. The kind of day where you just fall over into the snow laughing because its so nice out and life is beautiful. 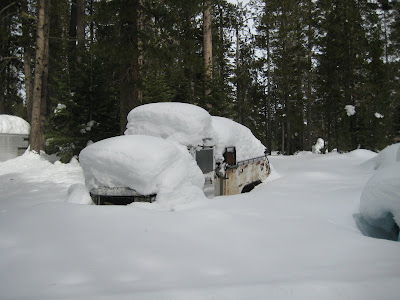 They claim its a low-snow winter. Really? 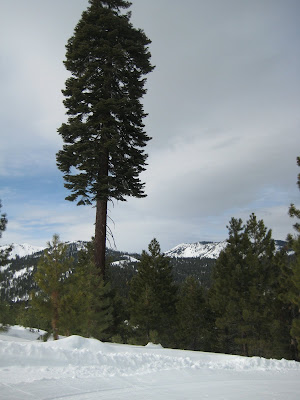 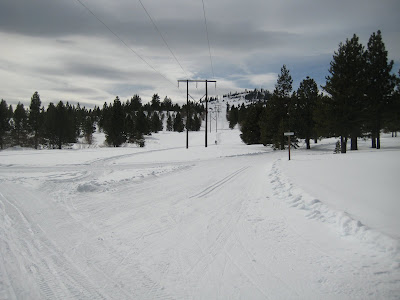