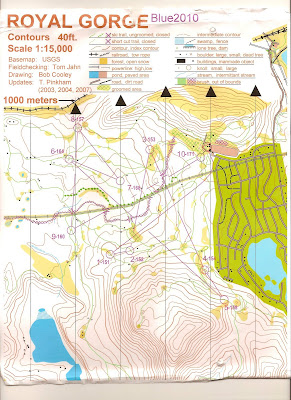 The third day of ski-o rolled around, and today it was billed as a long course, 12km straight-line distance (16 shortest-skiable route) and 400m of climb - definitely going to be a long grind. I was feeling ready to tackle some intensity, so decided to see what would happen when I started cranking. Last time I was at Royal Gorge was for the Gold Rush marathon, I went out too hard and paid for it dearly, so today I did a warmup and skied into the race. The first control was up a hillside, with pretty trivial navigation, so I planned out most of the first half of the course as I was climbing. The control was where I expected, which is always a great feeling, and I had decided to bushwhack down to the second control. It looked like a short drop, and downhill bushwhacks are always fun. I found Scott Pleban's tracks (he'd been the first starter on Blue, I was second), and since they were going in the right direction, I followed them. It felt like a long time before I hit the trail, but I came out right where I'd expected. I started skiing up the trail, and then I saw Scott, who looked pissed.

Scott said there was no control, he'd been back and forth here five times, and the control just wasn't here. Its always dangerous to believe what people tell you in races, but Scott wouldn't lie, and hes a good ski orienteer, so I figured I'd ski to my left down to the trail junction, and then turn around, just to have the entire trail covered, even though from where I was, I was sure that the control was to my right, if it were there. I went down to the junction, no control, then turned around and came back up. I should mention that the contour lines at Royal Gorge are 40ft contours, so there might not be many of them, but when you do see one, cry. Anyway, on my way up, I found the control, in the wrong place, but there, and I passed a guy who'd been doing the course on classic skis, who chuckled at me and said "missed that one, eh". This just served to make me really mad. I'd just made a mistake because I hadn't trusted myself, and while a misplaced control is truly obnoxious, it was still in the direction I'd originally started, so if I'd just done what I started doing, I would have been there three minutes earlier. Arrgh!

It was mostly downhill to the valley, and then back up the other side to 3. The downhill part was great, but then I hit the trail that 7 is on, and it hadn't been groomed yet. I could see Scott's tracks ahead of me, it looked like he'd been skating, but every time I tried to skate, my tips would get caught under the crust, and I'd get totally spun backwards, cursing at the top of my lungs that Royal Gorge couldn't be bothered to groom all their trails on a day when there is a race. Its one thing if its soft fluffy powder, this was heavy crust, and I was starting to fear that this entire side of the valley wouldn't be groomed when I finally made it to the trail junction, and a groomed trail. I was annoyed, it felt like things were conspiring against me, but at least everyone else would have to deal with an ungroomed trail too, although it would get faster as more people skied it. I would just change my route choices to avoid that trail for the rest of the course.

Well, unlucky for me and Scott, but the groomer came through shortly thereafter. The winner's time was 5:15 on that leg, my time was 10:30. I was almost matching the winner for most other legs. That means I lost 4-5 minutes on that leg, on top of the 2-3 minutes I'd just lost on 2. I was not a happy camper at this point, especially as 3 was at the top of the T-bar, which wasn't running (I don't know if it would have been cheating to take the T-bar, but I sure would have tried), at the top of that open area. After breaking trail for a km, that climb nearly broke me, and I ended up coach-skating most of it. Things went more smoothly after that. The rest of the controls were in the right location, although overlaying a GPS track (not mine, mine died on the starting line), the trails are vastly different than what is marked on the map.

On my way to 7 I discovered that the stupid ungroomed trail had since been groomed, and although it was still pretty soft, it was waaaay better than before. 8 involved some cut-throughs, and I decided not to cut down to the western trail to get to 9 because I just didn't like the idea of bushwhacking on my race skis through that much terrain on an uncertain map. Turns out that was faster, by about 2 minutes (based off the splits of someone I beat, so maybe by even more), but it just hadn't seemed worth it to me. I guess I just don't like bushwhacking on skis.

I figured I was home free after 9, but it turns out you have eight contours (yes, that means 320 feet) to climb under the powerlines to 10. It was brutal, I knew Randy and Greg were close behind me, but I could see Scott, as a black figure way up ahead of me. That climb took 10:18 - that is one long climb! I was starting to feel pretty trashed, but the most important split of the race was coming up - the finish split! I got myself turned around facing the finish before I punched (I know, thats sort of lame and sort of cheating, but I really wanted that finish split), and then just gunned it. It was a gradual uphill for most of it, and I was trying to rock the V2, but eventually it got too steep and I got too tired, so I tried to rally with a fast V1. That was the longest 34 seconds of my life, I swear, but it was worth it, because I beat all the guys (including the Swiss guy and the Lithuanian guy) on that leg. I'm moving up, slowly, today I was 4th overall, but the top three were within 15 seconds of each other (Raffael, Donatas, and Greg), and I was ~12 minutes behind them. Without some of my early hardships I might have been closer, but that's racing.

Tomorrow we get a rest day, which is nice, because it'll have been my fourth day at altitude, which tends to be the worst one. I'll probably knock out a slow jog, wheezing all the way, and then try to catch up on some work... exciting. Maps are up for the other days, now.
Posted by Alex at 11:38 PM

No time to actually read your blog, just look at the pretty pictures. They are still blowing snow at Weston! Bring back some of that natural stuff!