I've been hitting up the track recently, more for something to do than for any specific workout - it helps that the CSU-running section does track workouts every Tuesday. Don't have to think, just show up and do what they do, and its fun to have people to run with. I don't really have an athletic purpose right now, other than a vague "get faster at running" overarching goal, so doing other people's workouts doesn't bother me like it would if I were actually training for skiing.

I didn't used to like track, I didn't like running in circles, I didn't like the monotony, the lack of hills, or mud, or rocks to jump over and branches to dive under. Mostly, I think I didn't like the pain. There is no hiding on a track. The race is between me and my watch, whether its a race to finish a lap fast enough or trying to pace myself intelligently. Although I didn't like that exposure to pure running back when I was a runner, I'm loving it now. Its running, pure and simple, with nothing in the way but my own feet.

There are friendly people around me, but I stop thinking of them as people and more as tools - this tool is moving too slowly, it is in my way, I'll go around. This tool is going the right speed, I'll use it so I don't start too fast. It becomes such a focused, mathematical, precise workout, there is something extremely satisfying about that. I can calculate exactly how fast I want to run each lap, each 200m, each straightaway, and then the game becomes hitting those paces. Because there is nothing to distract me, I focus on running, from split to split, rolling through the laps exactly as planned. The people get me to the track, but once there, I don't need them.

Each workout just serves to make me want to get faster. The desire is back. 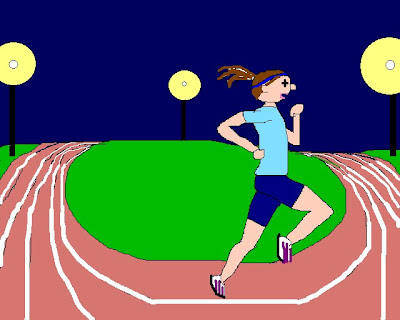 takes a mama to know that!! xoxox