Last week, one of my junior skiers emailed the team to tell us about the Adro mile, a scholarship fund race for Concord Carlisle highschool, in honor of Adrian Martinez, a talented young runner who died unexpectedly during a pickup soccer game. I decided to sign up for the race, because at the very least the money was going to a good cause, and hopefully I'd run fast, too. Ross and Ian from the orienteering section decided to come along; Ross had run with Adrian at Williams. I was originally signed up for the "Adro" mile, which is the elite race, but luckily the track coach/race promoter warned me that the other women signed up were sub-5min milers before I toed the line with them - I would have gotten slaughtered. 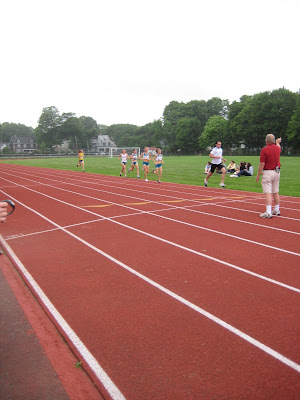 Yeah, I do not fit in with this crowd.

Steve, the track coach, broke up the open heat (coed, age 19-39, with only three women) into three heats - sub-5, sub-5:40, and everyone else, since it was pretty big. Given that my last (and only) mile was 6:04, and this was a full mile, rather than a 1600, 5:40 would be a stretch, but I was sort of hoping I could do it, given all the running on a track I've been doing, and figured I'd rather tailgun it and run my own race than have to worry about highschool boys who can't pace - the ones who can pace would definitely be faster than me.

Tim Parsons was there to run the masters' mile, and was kind enough to take some photos of me while I ran. 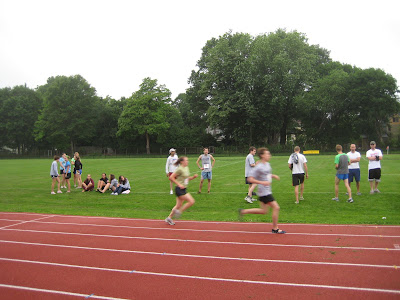 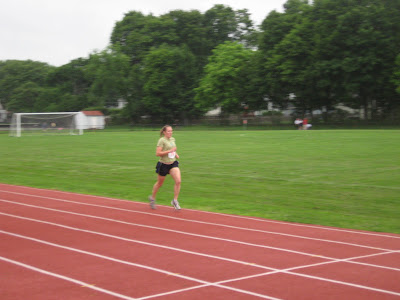 The second lap I slowed down too much, I thought the third lap was supposed to be the hard one, but I was having trouble running smoothly on this second one, and my upper body was starting to feel fatigued as well. I came through the 800 at 3min flat, which was a big slowdown, and so I tried to push hard through the third lap. My legs felt heavy, and my arms felt heavy too now, but there was no lung-burning agony like I'd expected. Either I'm not in shape, or I just had accumulated too much lactic acid in that first 400 so couldn't get up to speed, but there wasn't much I could do to speed up at this point. I was off the back now, just trying to keep running. 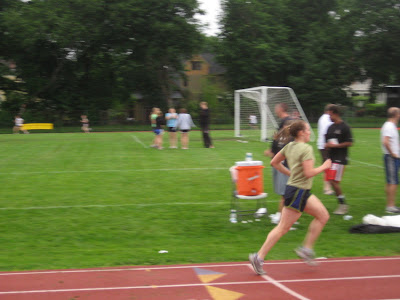 The last lap was painful, as expected, and the other half of my brain (the half not occupied with trying to figure out splits and remembering how to run) really wanted me to stop running. "This is decidedly uncomfortable! Can we stop this torture now? Its gone on long enough!" I had hit the point where it takes serious effort to go through the motions that should be so natural - one foot, then the other, with a hop in between, I mean, everyone can run, but my body seemed to have forgotten what to do - almost like my brain had to explain step by step how to do it. As I came into the finish straight, I could hear the guy on the announcer telling the crowd to cheer me on so I'd break 6min, and I did my best to kick - it was pretty pathetic, but it did the trick, and I crossed the line at 5:58. New PR! 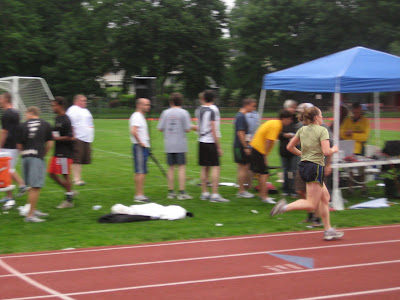 Although not as fast as I'd hoped, I'm pleased with this run, and thinking that I might actually do some more running training and bring my track spikes out of retirement at some point to see how my calves handle them...
Posted by Alex at 9:35 AM

last thing you need are spikes and the extra stress it puts on your body structure!

But to feel like you have wings on your feet... its worth the extra stress =)