I could get used to this house on Lake Willoughby, aside from the whole dark-as-hell kitchen and lack of light switches. I know it was built a long time ago, but you'd think that by now, they would have gotten around to light switches... anyway, Ed joined us on Wednesday, and we did much more biking and hiking and running and playing in the water. 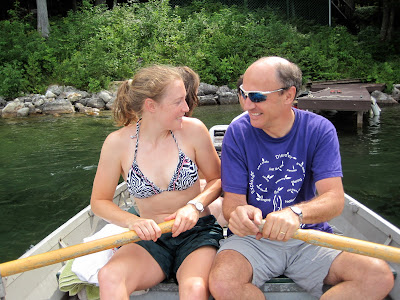 It turns out that my family just isn't good at doing water stuff. My mom and Christophe and I headed out to find an alleged rope swing on the far side of the lake under the cliffs one night, after an abortive attempt to find said swing that morning, when the waves were just too large for comfort in our little rowboat with the engine. We found the rope swing, and had to figure out how to make the boat not float away. We could have tied the boat's rope (that normally ties it to the dock) to a tree, but then the boat might run into the shore because of the waves, so we decided to lower the anchor. My mom picked up the anchor and said something to the effect of "Sweetie, this is really heavy. Are you sure?" and Chris and I both agreed that we should just toss it overboard. Splash.

After a good time playing on the rope swing, it was time to go home, as the sun was starting to set. I attempted to pull up the anchor, reasoning that if Mama could have thrown it in, I should be able to pull it out. It wouldn't budge, so I called over Christophe, who attempted to pull it out, still nothing. We both hauled on the chain for a bit, but no luck. After trying various stupid attempts to do something with an oar and a cable, Christophe decided that he had no choice but to dive down and see if it was stuck. I held the chain taut and watched him get smaller and smaller as he went down; I'm terrified of going underwater and fairly claustrophobic, so I was getting pretty nervous watching him shrink underwater. Eventually he came back up, turns out the anchor is stuck under a rock. Well, how big is the rock? So, he went back down. The rock is huge! And his ears really hurt, the anchor must have been 25 feet underwater, and he was making that descent and ascent quickly. After some debate, a little panicking and a lot of tugging on the chain, we determined that the only thing to do was to detach the anchor and just buy Sam a new one. Of course, then we hit the second problem, that the chain seemed to be rusted on to its attachment thingy. Luckily, Christophe got us free, otherwise, we'd probably still be floating there, cursing water and swimming and boat stuff and all things related to water. 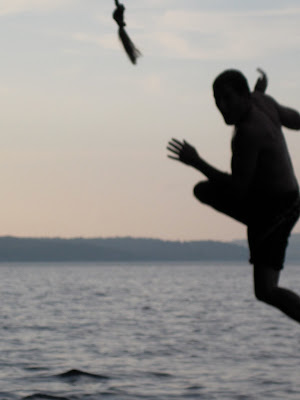 Shooting into the sun. I still haven't located my camera, but was able to steal photos off my mom's camera all week. 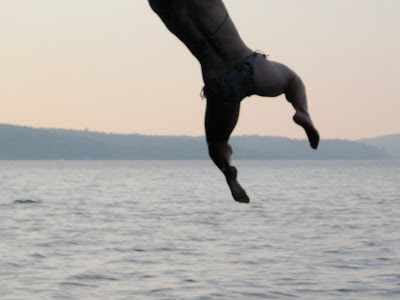 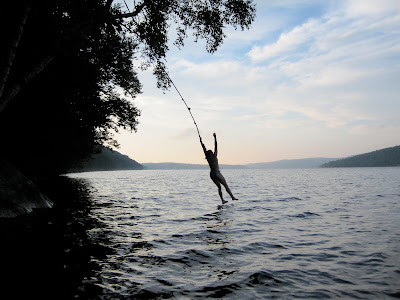 Eventually, Ed and my dad decided to come rescue us in the canoe. 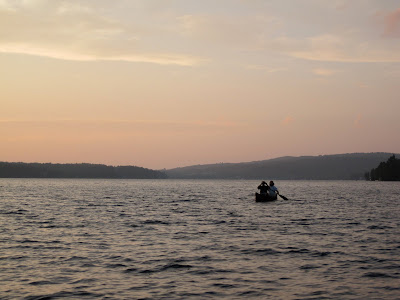 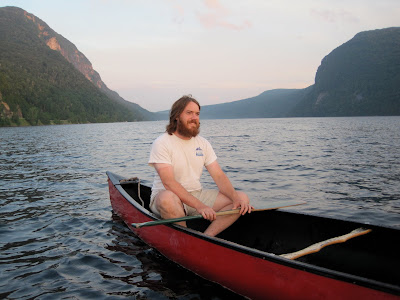 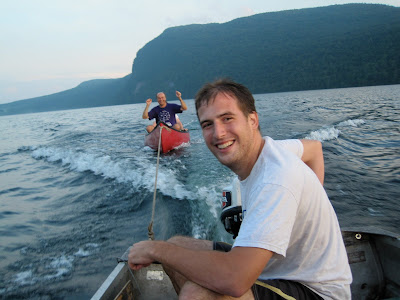 And then they wanted a tow home. The nerve! 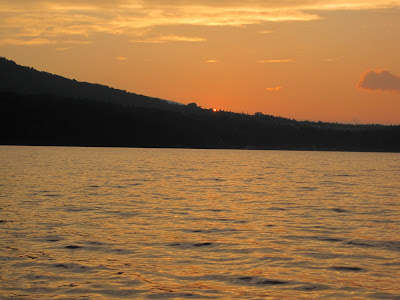 Then, the sun went down. Home just in time. 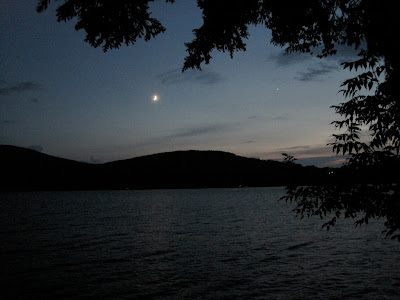