A long day at camp 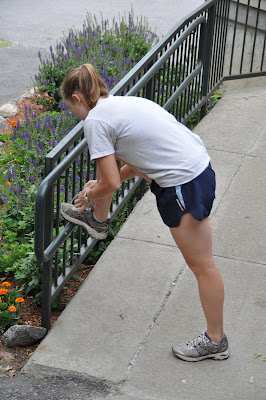 The day started early, as days tend to do at ski camps, with a morning run and some yoga. People are slowly learning the value of being on time, as I've been leaving on the dot for the morning shuffles. Thank god breakfast follows immediately, although it doesn't help with the early part of that. 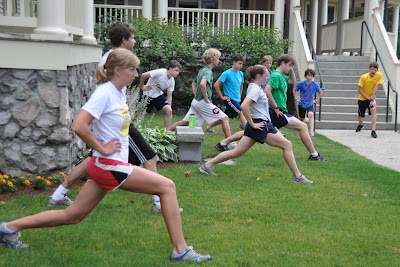 Today was a long one. We started with a morning workout of classic/double pole speeds. The Blue group and Gold group broke into boys and girls groups, and did different-lengthed warmups so that I could start videotaping one group and then the next, while the Red group did a much longer warmup, and the Green group went out on a skate ski. It took a fair bit of coordination on the logistics side of things, but I think it went pretty smoothly overall. 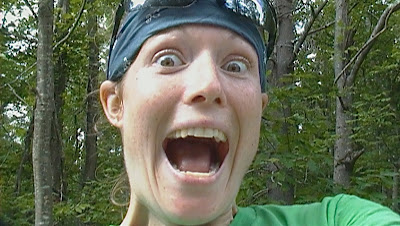 Luckily, I had as much energy as I always do.

After lunch and some video review, we got a brief break, during which most of the athletes took naps and got their feet up, and Isaac, Olga, Jimmy and I (Isaac, Olga, and Jimmy are our "intern" coaches) filled water balloons and planned the scavenger hunt we were doing this evening. I created a map using google's satellite view and a pen and paper, and then we came up with some darn interesting clues. Which state has the longest coastline? What is Rob's favorite movie? Solve Fermat's last theorem.

After lunch, it was time for some ultimate frisbee as a warmup, and then I led a pretty hellacious strength circuit. My circuits are always hard, but this one was just cruel. I think maybe too cruel, next year will be a little easier. We finished up with eight-minute abs and then some optional pushups, and a good crew of CSUers chose to do a pushup pyramid - what have we created?

After dinner it was scavenger-hunt time, and although there were a couple incidents of water-balloons-to-the-eye, there were no tears, and nobody got lost. Nobody solved Fermat's last theorem, either. But Rob's favorite movie is Enter the Dragon, if you were wondering. Once we'd calmed down from the scavenger hunt, Rob gave them a talk on sports psychology while I went out to collect controls, and now we're attempting to rest up before a hike on the Wapack trail tomorrow. Hopefully with no thunderstorms.

That was enough activity for a full week, damn. 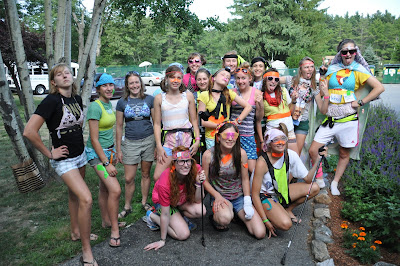 Oh, and last night, Kelsey walked in and announced that it was "wacky tacky" night. Wear anything, as long as its wacky or tacky or both. Rebecca went all out. Olga and I were a little more modest. Unfortunately, most people removed their costumes before we went mini golfing.
Posted by Alex at 10:36 PM