I try to do at least one of these a year, to get some indication of where my fitness is. Since I've now been running 3ks since 2002, I have many years of data, which makes my inner nerd pretty happy. Given the knee injury that wouldn't go away earlier this fall, I wasn't sure if I'd be able to run this year, but I'm mostly all-clear for running now, so figured I'd give the 3k a shot. Over thanksgiving week, I ran some 1000s on the track, just to get the pacing down, and see how my body responded. Turns out, 4min/km was quite taxing, and my legs felt like they were going to explode. Not a good sign. I set my sights on hitting 12min for the 3k, expecting maybe 10s of variation, mostly likely towards 12:10.

Luckily, I had company this year - the US orienteering team has to run a 3k as a team performance indicator thing, so most of them were running one before the superstars events started. We had a good crew, about 15 runners, some from the US team and some ardent supporters who are not on the team. My mom was on hand with Tira to give a couple "go sweetie!"s, and Peter and Claire and Ian were cheering/timing as well. I had the light shoes on, hoping for every advantage I could get. 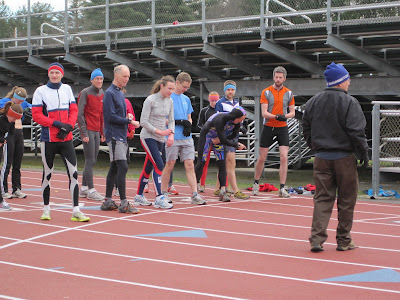 A ragtag crew on the start line. 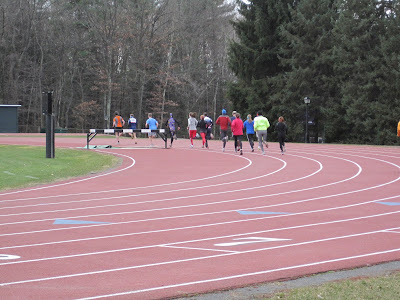 I knew I wouldn't be able to run with Sam or Ali, but that I'd be faster than Katia and Kseniya, the other two girls. I was hoping there would be some guys going my speed so I could draft on the windy backstretch, and it turned out that Giovanni was going just the speed I wanted. The first 200 felt effortless, 42s, and I was able to bring the pace back to something slightly more realistic coming back around the lap. Giovanni took the lead going into the second lap, and was running very consistent 95-second laps, so I tucked in and tried to stay relaxed. Things felt nice and controlled until about 4.5 laps in, when I noticed a gap growing between me and Giovanni. Knowing that the windy backstretch was coming up, I surged to get back in his draft, and hung on for another 400m, but with 2.5 laps left, I popped, and couldn't close the gap. At this point I was no longer running smoothly; the fat-kid-with-asthma breathing had made an appearance, and thoughts of lying down at the finish line were overwhelming my brain, which was taking a full 200 meters to add 48 seconds to my current time.

With one lap left I tried my hardest to rally, it felt like running was taking way too much coordination, and my legs felt like they were moving through jello, injected full of lactic acid. So hard to keep driving, but I finally crossed that line, in 11:47. 11 seconds faster than my PR two years ago, but I'm not sure how much of that is due to the light shoes. A good bit better than my expected 12:10! It is always relieving to perform better than you expect - maybe the fitness is there, after all. Now all that remains is to see how I do at the double pole time trial this weekend... I might be more race-ready than I previously thought.

The other thing that's pretty cool (nerd alert), is the heart rate correlation to speed - Through about 6 laps, my heart rate was steadily climbing - it took 2.5 laps to break into L4, that zone just below your LT. Then I had about 2.5 more laps right at threshold, and by 5 laps in (where I lost Giovanni), I started popping above my LT, though not consistently. I made it another lap above threshold, and the last 1.5 laps, my HR started dropping, back into threshold-land, despite the speed staying pretty high. This probably correlates pretty well with where I started taking much bigger steps, sort of lurching down the track instead of running, but I don't have a video or anything to prove that. Its cool, though, to see what happens once you cross threshold - I apparently have about 3-4 minutes of grace period where I can deal with that much lactic acid, before my body can't flush it anymore, and shit hits the fan. Should probably work on that a bit... But it is fun to see how HR relates to that "comfortably hard" feeling.
Posted by Alex at 9:32 AM