A long, long, time ago (20 years), Peter Gagarin held the first ever Orienteering Superstars event. It was modeled off of some sort of tv show that had been going on back then, and basically it was a bunch of events that made fun of certain runners for various traits. Peter and Ali and I were talking a while ago, and decided it was time to revive the Superstars event, and model it off of the current crop of orienteers' quirks. We talked about having the Samantha-speed-talk (Sam talks at a million miles an hour), the Ross Smith call 'em in (Ross is an awesome cheerer), the Boris Granovskiy pole dance (Boris' wife, Kat, has taken up pole dancing, and we're sure that's how he threw out his back a few weeks ago), and more along those lines. We ended up with the following events:

Basically, this was a bunch of barely-controlled chaos, in the vicinity of Peter's house. No event was longer than two minutes, unless you were particularly bad at it, and only weenies took it too seriously. My mom was here for the weekend, and she had an absolute blast, playing around with all the different events. 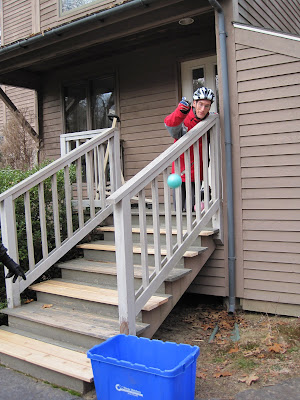 Here, Giovanni is pictured in the biathlon - you did 100 stair-steps, then you had three balls to throw into a bucket. For every one you missed, you had 40 penalty steps. First you threw standing, then you ran down, collected the balls, ran back up, and did another 100 steps. Then you threw kneeling. And did you requisite penalty steps, if you are short like me and can't see over the railing. 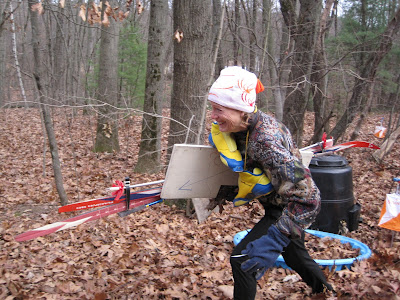 My mom about to start the ski-o: you had to carry all sorts of shit (skis, poles, boots, a map board (literally, a wooden board), and a punch card, and then you had to run around a very short course and punch four controls. I went early, and didn't know the course, so was trying to use the wooden map to navigate - not fast. The trick was to memorize the course, and then punch one-handed. 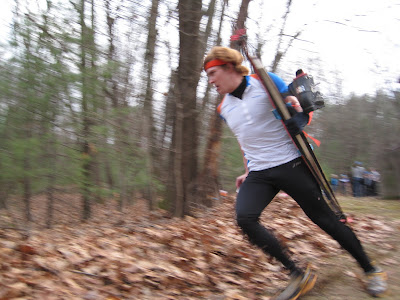 Ian attacking the ski-o course with all he's got. 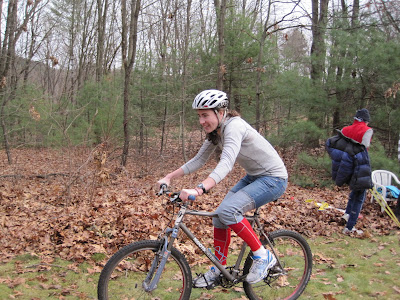 Ali starts off on the mountain bike course. Peter put some flat pedals on his bike, to go around a 45-second loop around the house. Not very technically challenging, but the uphill hurt like a bitch when you're not warmed up and suddenly pedaling a bike as hard as you can! 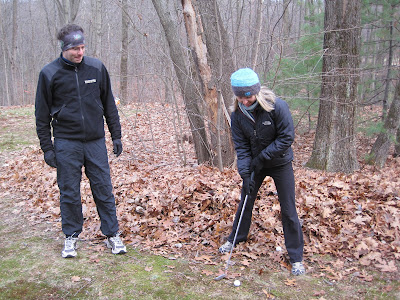 Boris and Kat tackling the mini golf. Peter had dug some holes in his lawn, and those were what you aimed for, negative points if you hit the house. Keep in mind that he has a very small yard, and all the events went through the same sections of lawn. Semi-controlled chaos. 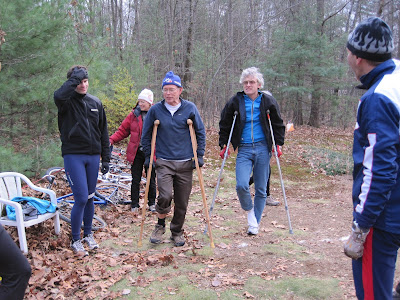 Peter and JJ about to start the crutch race, in honor of Ian, who broke his leg earlier this spring, and was on crutches for a long time. I did this one with the larger pair of crutches, which was basically impossible - it was faster to hop, because the crutches would continuously pop out from under my shoulders, being too big for me. The course went through the woods, which didn't help matters. 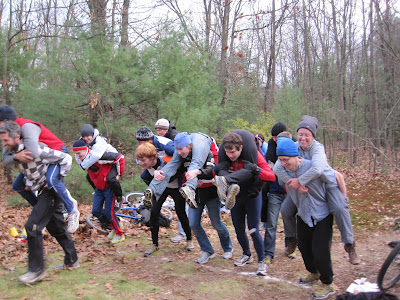 The start of the wife-carry race. I should mention that we were all in teams, mostly in couples. Ed was stuck in Boston fixing his truck, so I was in the "surrogate wife" category, along with Ken, Ian, Greg, Neil, and Ali - everyone else had their very own wife. Being teamed up with Ali, we determined she should carry, and we had the right technique, but unfortunately, she isn't really built for carrying heavy things, and I'm not really built for being carried, and about 3/4 of the way through, she just collapsed... the video is fairly hilarious. 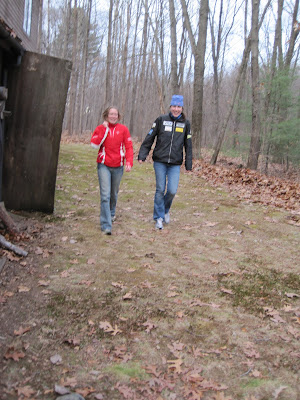 Yeah, we actually did the "wife drop" instead of the "wife carry". 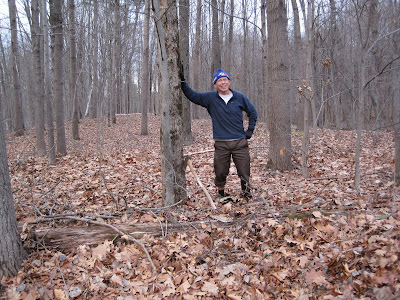 Peter, posing by his successful axe-throw. 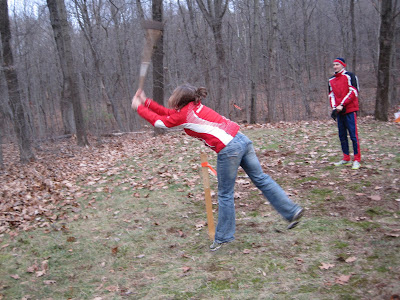 I've forgotten everything I learned when I was a woodsman at Colby, plus the axe was way too heavy, I could barely get the thing over my head. No, I did not hit the target with the blade-side forward. 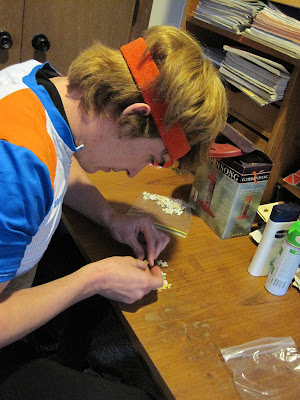 The speed-puzzle competition - Ian is working hard, but I beat him, by at least 30 seconds. 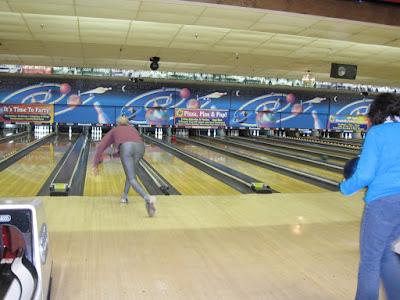 And the bowling - Ken broke out the silver spandex. I didn't break 100, but I came close with 97. I think I've long since accepted that I am just not a good bowler. Sigh. 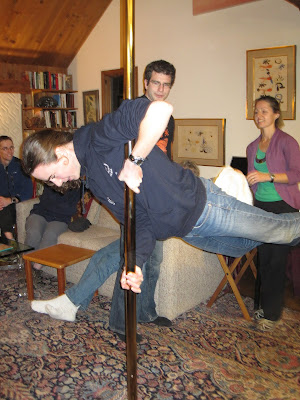 Last, but not least, there was the pole dancing competition - Kat is really into pole dancing, and brought along a pole. She tried to show us how to do "transition moves", i.e., shake your booty, but most of us were just interested in learning the different spinny and upside-down moves. Good times. 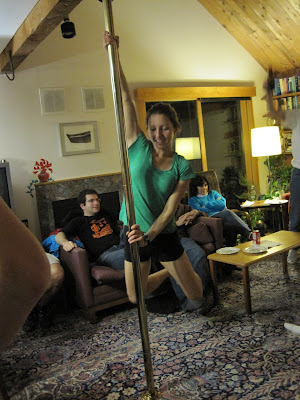 Kat showing us how its done. 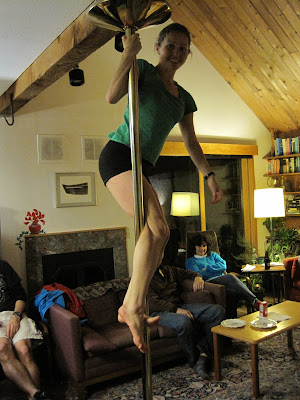 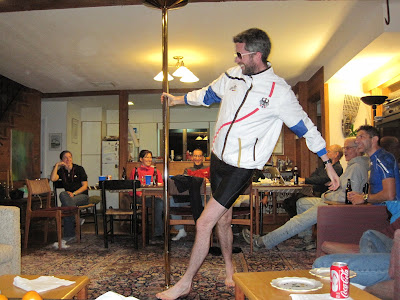 Neil put on a good show. 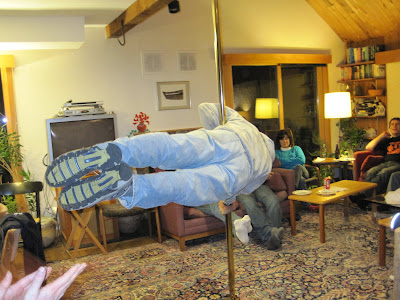 Most of the guys figured out that they could hold themselves horizontally, not fair.

In the end, Sam won the women's category of the Superstars, and Joe won the men's category. In the team competition (I was paired with Ali, for lack of a suitable wife in town), Kat and Boris won (mostly, because they destroyed the wife-carrying competition). But really, the point wasn't about winning. It was a barely-controlled chaotic evening of good fun, good food, good drink, and good people. I wouldn't have missed it for the world. I hope this becomes an annual thing, rather than every 20 years.
Posted by Alex at 7:29 PM

I have just downloaded iStripper, so I can have the sexiest virtual strippers on my taskbar.