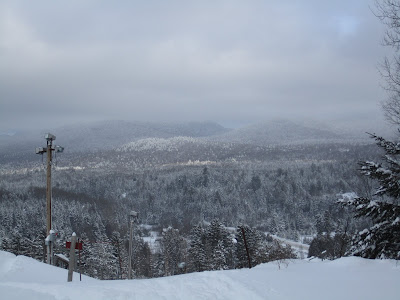 Thursday morning, post-snowy-fun-day, I packed up and headed to Lake Placid, to be the head coach for CSU for a weekend, since the race was an out of region race, and not many kids were going. The waxing looked to be easy, and I had Janice Sibilia to help me out if I needed it, since she was doing wax support for some seriously fast skiers - XC Oregon, CXC, Sun Valley, and Noah Hoffman (USST), among others. I got there early enough on Thursday to help her test some wax, and luckily, it was cold and new snow, so waxing was pretty straight forward. I had everyone's skis by 10pm, and got enough done that night that there was minimal work to do on Friday.

These were Friday-Saturday races, because it was also the Saint Lawrence Carnival, and the EISA Carnivals are always on Friday and Saturday. Hence getting there on Thursday morning. Friday dawned cold and clear, with some snow showers moving through occasionally, and the waxing stayed easy. I got all the girls out, and with one exception they really liked their skis. Just having two J2 boys meant that I could get them testing their skis before I decided that I would go race, too (I had signed up ahead of time, just in case I'd have time to race, which I didn't really expect). It was sort of a last minute decision. Didn't go great, but I didn't really expect it to, so that was fine. 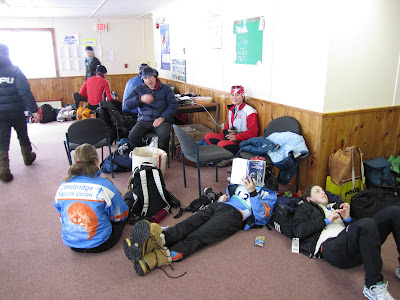 Hanging out before the race.

Eventually we were back at the hotel, and the parents treated me to a nice dinner at Mr. Mikes. I'm not sure I've ever been to Lake Placid and not eaten at Mr. Mikes. I remember eating there when we had states up there when I was a sophomore in highschool. Anyway, I decided that I had time to fluoro skis in the morning, and managed to not wax any skis Friday night, it was wonderful.

Saturday was a skate race at the biathlon side, and things went very well for most of our kids, except Hannah.

We had rocket fast skis, and I told Hannah I'd bring her skis out to the start, so she could keep warming up (she was the first starter, the rest of us were 15min later). Bob B. was hanging around the waxroom desperate to be useful, since I'd been kicking parents out of the waxroom all weekend, trying to keep up with Janice's system (stay out of her waxroom, unless you belong there, basically). Since I could tell Bob would be happier if I was giving him tasks, I asked him if he could take the girls' race skis out, and while I meant "to the start", he didn't catch the telepathic bit of my message, and had the skis out by the warmup area, instead of the start, which is a perfectly logical place to be. This meant that Hannah never got her race skis, had to race on her warmup skis, which were butt slow. So basically I blew her race for her, and I was in pieces about it. Luckily Hannah is a mature kid, and has since forgiven me, but its hard to forgive yourself when you make a mistake like that. That's what sucks about ski coaching, when you mess up, you blow other people's days.

I did that race, too, and it went even less well than Friday, and I hadn't really been expecting that, so it was a bit of a disappointment. Ah well. Then a long drive back to Boston, but I was giving Brian Gregg, a skier from CXC, a ride to the airport, so at least I had company.

Now back in Boston, and I feel absolutely shattered.
Posted by Alex at 9:34 AM